Prana: The Fiery Breath of Life

Prana, also called ‘God’s breath’, contains galaxies. Without this spiritual fire of the sun, the planets and people would all cease to exist.

We can survive a few weeks without food, a few days without water. But without air, only a few minutes. What makes air so important? The oxygen? Sure, but not that alone. There is something in the air that is shrouded in mystery, something wonderful: the breath of God, what the Hindus call prana. 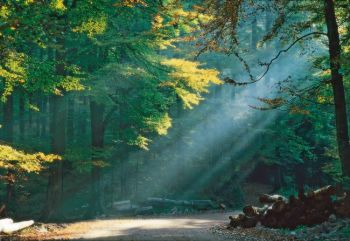 Sunlight charges the air with prana. Oxygen then carries this life-essence into our lungs and hearts.

It is that life energy that the Creator breath­­­es into every creature to awaken and preserve them. In his book, The Chakras, Charles W. Leadbeater dedicates an entire chapter to this ‘breath of God’. The ancient Hindu texts teach of the existence of a primordial atom that underlies all other atoms. This subatomic particle is charged with life energy by the sun. It swells from within, brim­­­ming with vitality. Modern science is still unaware of this energy. In contrast to warmth or electricity, this vitality doesn’t penetrate the primordial atom from without, but rather from within. It enlivens it and makes it glow.

Even though these vitality particles are unimaginably small, even humans can perceive their radiant glow. If you gaze at the horizon—especially over the ocean or in very bright sunshine—you can make out the glow­­­­­­­ing white or light-golden points, dancing and twirling in the air. This vitality continually swells in streaming sunshine, but these particles decrease significantly in cloudy weather. At night, according to Leadbeater, the production of vitality is completely paused and we only live on the surplus of the previous day. That is why we long for the sun so strongly after long dark days and maybe even feel tired and depressed.

When the vitalised atoms are more spar­sely sown, a healthy person automatically increases his absorption capacity (the spleen Chakra—not to be confused with the solar plexus Chakra!—is responsible for this) and extracts his life-power from an enlarged area. He thus maintains his powers at a normal level. Elderly or sick people or individuals with weak nerves are no longer able to do this. They soon become weak and irritable and can sap life-power from healthy people around them, who then suddenly feel tired (when in the vicinity of such people). The life-power generally ebbs in winter and nature sleeps, since in the weak sunlight, there is simply not enough vitality generated.

Health Without Sufficient Sunlight is Impossible

Prana means breath. When we breathe, we draw the vitality particles into our bodies. And in large quantities. There is no other atom that is as charged with vitality particles as oxygen is. This life-energy is transferred from the oxygen to the blood in the lungs and the blood then carries it to all the other cells in the body. That is why correct breathing is so important.

But these sunlight-dependent vitality particles of the air are only one expression of the ‘pranic fire’. This invisible fire is what keeps the entire world system in order. Alice A. ­Bailey dedicates a few chapters to prana in her book A Treatise on Cosmic Fire, which contains a lecture by Tibetan master Djwhal Khul. According to him, there is cosmic, solar, planetary, and human prana. They are all different aspects of the same spiritual fire that is incrementally transformed downwards.

The law of analogy also applies here: just as humans absorb, assimilate, and then emit prana, so do the planets and the sun. To absorb prana, there is a subtle tissue that surrounds all life forms: the so-called etheric body. Its function is to absorb the prana’s fire, disperse it and direct it to the organism, regardless of whether it is a human body or a star. It follows that suns and planet also have etheric bodies. These bodies form the blueprint according to which the physical body is then created.

Stars Extinguish When Their Prana is Withdrawn

If the prana, the ‘fire of matter’, weakens, the physical body decays to mere ‘dust’, just as we humans die when we have taken our last breath. Fire burns. Even spiritual fire. Prana in its pure form would destroy our bodies—its energy is so intense. That is why it is necessary to step this life-fire down over several levels until we can absorb it without danger.

The source of prana is the central sun. It sends its life-breath out into its galaxy by creating the ‘cosmic’ prana. This cosmic prana is received by its encircling suns, which then radiate part of it out as solar prana into the solar systems they created. The planets in turn pass the solar prana they receive on to their inhabitants—and so on. However, trans­­­­­­mission of prana is not a one-way street. Rather, all bearers of life radiate this life-force to each other.
Exalted gold-coloured Devas (angelic beings from the nature kingdom) absorb, bundle, and radiate the solar prana, this life-giving and magnetic fluid, to the human etheric body. That’s why it is sometimes also called the body of vitality. This prana maintains the physical form. But the power of these nature-beings is so great and our understanding of prana is so small that we easily end up with sunstroke or sunburn if we’re not careful (too much light and prana can burn the channels of our etheric body). The etheric body receives the prana mainly through the etheric spleen, but also through two additional centres between the shoulder blades and above the diaphragm. This is the source of that pleasant thrill when the sun’s rays warm our shoulders, or the feeling of warmth that spreads through our body when the sun tickles our stomach.

In many people, however, these two centres are shrivelled and not fully functional. If you wear the right clothes (no synthetic fibres) and are outdoors a lot, the pranic streams can flow freely into these centres and thus reactivate them. Sunbathing helps stimulate these etheric centres. And it also happens in partial shade. For too much sunbathing also holds dangers: if the centres are exposed to too much sun—as in the tropics, for example, or on beach holidays—we absorb too much prana. It then flows too quickly through our bodies and cannot be assimilated. This leads to weakness; you can feel like a slackly strung tennis racket. Many Europeans suffer from too much prana absorption when they live in the tropics.

The etheric body assimilates the prana by first cycling it through the three centres (spleen, diaphragm, the back between the shoulders) before it spreads through all the fibres of the etheric body. It then leaves the body, charged with the individual quality of the person in question. This human prana is also called the health aura. In a healthy person, the excess energy (prana) radiates perpendicularly out of the pores. Clairvoyant people thus see a colourless or peach-coloured radiant body around those people, a body that lies over the physical body like a second skin.

If a person is sick, the rays bend out like drooping flower stems; there is not enough energy flowing. A clairvoyant can thus im­­­mediately see which parts of an organism are weakened. This aura is like a protective light that holds viruses and negative influences at bay.

Mesmeric trials have shown that this life-fluid forms the basis of our nerve stream. When too little prana flows in them, the extremities lose their feeling and go lame. Such insensitivity doesn’t only occur in connection with circulatory disorders, but also when the life-fluid leaves the extremities as a result of magnetic coating, which doesn’t influence blood circulation.

End of extract „Prana: The Fiery Breath of Life“

The full article reveals what the central sun deep inside the earth has to do with solar prana – and why smoking cigarettes or cigars not only ruins our health, but also damages the soul’s garment. If you need extra motivation to give up smoking, you’ll be sure to find it here! Find the full text in our Facts are Facts print edition no.11.

Read here how the Universal Spirit created the universe and how solar systems are born and fade away: Cosmology: Born of the Spirit

Read here what the great adept Omraam Michael Aïvanhov believes about the culture of the sun: The Sun: Source of our Being