The Sun: Source of our Being

We are all children of the sun. We live in the body of the sun. Everything that we have, are, and will be comes from the sun. How amazing that we seek God, and don’t recognise Him or Her in the sun!

In the 1960s, a new mass phenomenon appeared: the sun-worshippers. Millions of people packed swimming trunks, bikinis, and a crime novel or crossword puzzle in their suitcases every summer, and headed to a beach to lie in the sun. It might seem banal, but it is interesting that people turned to the sun like this just on the eve of the new age that must bring the entire Earth into a new, higher, more divine vibration. When the sun shines, everything is good. All life smiles. We feel, on some unconscious level, cherished and secure in the sun’s radiant arms. Sun good, everything good.

The sun symbolises festivities, holidays, good times. Grey skies mean the blues, feeling left out, and for some, dull hopelessness. The clouds are like the gloomy fog of our worries and fears. Isn’t it enough that we carry them in our hearts—do they also have to hang over our heads? 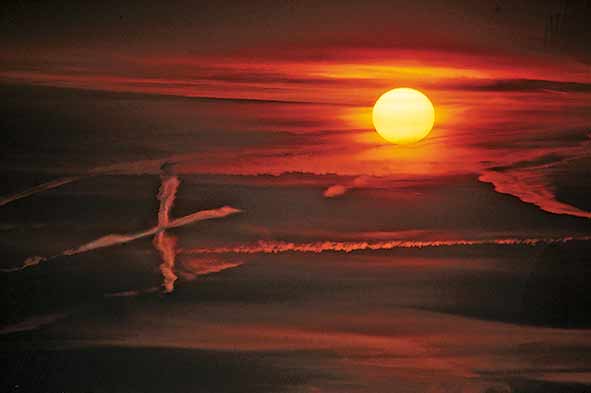 Naturally, most people don’t know anything about the blessed effect of the sun’s rays (and the fact that we have by now so poisoned our atmosphere that sunlight can actually be dangerous is by no means the sun’s fault). And modern sun-worshippers are more occupied by their crossword puzzles or the skimpy bikini on the girl walking by than they are with the sun. It simply shines, as one can expect it to do in the south. We only notice it when dark clouds cover it up. A thunderous reminder!

The sun is kind of like God. We don’t spend a lot of time thinking about Him. And so, just as misdirected science now informs us that the sun is dangerous for our health, the Church has presented God to us as a wrath-filled avenger. We’ve since figured out that that’s not quite right. And so we leave God to the pastors and head off to become ‘spiritual’ instead. We dive into elusive dimensions, searching for multiple selves and all kinds of gods—ensuring our ‘coolness’ and sticking with the New Age trend.

What would we expect from God if we were to think about Him? That He loves us, that He provides us with everything that we need, that He’s there for us, that He forgives and is generous, that He knows us for what we really are, and that He supports us and helps us to grow. Something like that. There is a being that we see (almost) every day and that does all of that for us—and yet we don’t recognise it for what it is: the Godhead of this solar system—the sun.

Everything in this solar system comes from the sun: worlds, humans, animals, plants, minerals, and all invisible spheres and creatures. All of this was created or exhaled by the masculine aspect of the sun and is now kept alive by the female part. The feminine aspect of the sun is what the Catholic Church androgynously calls the ‘Holy Spirit’.

Yes, it’s true: ‘God’ is male and female. So it makes sense to speak of the Father-Mother God. Father-God is creative, centrifugal, positive (+), electric; Mother-God is sustaining, centripetal, negative (-), magnetic. The force of our Mother-God comes to us in the form of prana. We breathe Her in with every breath! She is the life energy that sustains everything and that makes it possible for every cell of life to remain alive.

Everything that exists was created through the light prism of our Father-God and brought into manifestation through the ‘Holy Ghost’, the substance of our Mother-God. Because everything is vibration and consciousness, the level of consciousness alone determines how thickly material or how finely subtle something is. Our Earth has just passed through the deepest valley of density on its evolutionary journey and is now progressing towards a re-spiritualisation. All of us who are currently embodied are called on to do the same: to become Light and lighter—light-bearers for all life around us.

It has become hard in this time of spiritual wild growth (or ‘maya’, as the ancient teachings of the East call it) to find the right spiri­­tual teachers. Why not turn to the sun? It is the most omniscient, best, most reliable, loving teacher that this solar system knows! The sun that we perceive in the sky is just a visible manifestation (or focal point) of two great, magnificent beings of Light. There is really nothing under the sun that they don’t see. They are the ones that have counted every hair on our heads, as the Bible says; they are the ones who know our past and our future.

And what if we were to lay ourselves down on the beach as true sun-worshippers? And open our hearts wide in intuition, feeling, wonderment—knowing that the warm, glowing ball up there is our God who created us? That is why we feel somehow safe in the radiant arms of the sun. Because we are actually its children. Even those who act so important and will only laugh at these words. It hurts our spirits to think that the sun is just a gigantic thermonuclear fusion reactor, as the scientists would have us believe—the scientists who have never been on the sun and who want to sell us their idea of the sun’s essence, which is pure imagination, as reality.

The spectrum of the sun’s rays encompasses all the natural radiation that there is, and this radiation supports and encourages life. Gamma rays from the sun are essential for the evolution of all life. Without this na­­t­ural radioactivity, evolution would not be ­possible. But Paracelsus’ saying applies here too, as with all natural substances: the dose makes the poison.

The more developed a person is, the more radioactivity he can handle. But man-made artificial radioactivity is not part of sunlight’s vibrational scale and therefore attacks all life in a disastrous way—ALL life, even in the smallest dose. This is called the Petkau effect which applies to all unnatural substances or radiation: a low dose over a long period of time is more detrimental to health than a high dose over a short period of time. In other words, there are no safe threshold values for artificially created radioactivity or microwaves, to name just two prominent examples.

There are far more invisible frequency ranges of sunlight than there are visible. Someone who doesn’t give a thought to the sun will maybe end up with just sunburn and a spinning head after a day of sun-bathing. Someone who opens their heart to the sun, who connects his own inner sun with the one in the sky, also receives the sun’s spiritual gifts. Every person’s Higher Self, or divine self, dwells, without exception, in the sun’s heart.

The sun itself is a wonderful world, incomprehensible for our senses. What could it be like there? Certainly not how they portray it on computer-simulated photos. After all, since all life in this solar system comes from the sun, then it must contain in it everything it has created—in a subtle, aetheric form.

After all, every part of life creates according to that which it is; that which doesn’t (e.g. genetic engineering) misappropriates divine creation. Omraam Mikhael Aivanov (1900-1986), a French philosopher and pedagogue of Bulgarian descent, was an ardent sun de­­votee his whole life long. The lectures that he gave every morning at dawn in southern France from 1967-68 about the sun’s nature are collected in his wonderful book Surya Yoga. He had this to say about life ‘in Hea­ven’: “Everything we see on Earth (the seasons, the planets, events, human life with its sleeping and waking, nourishment, love, childbirth, death…) is only a reflection, repetition, an imitation of another world; just as the shadow of a tree resembles the tree, but not the tree itself, or as a man’s reflection in a mirror resembles him, but is not him. The initiates have always spoken of the world as a shadow, an illusion, a delusion; they saw it as a reflection of a higher divine world, as a likeness that shows the way to that super-reality that is similar, but indescribably more beautiful.

“Now you understand why I said that the sun is the world above and the earth is the world below. The sun, typifying heaven, is the symbol of the world of the gods. Heaven (or rather, the Heavens), is teeming with life: there are inhabitants there who have houses, just like us, they eat and drink, are born, love and make love, but divinely. And there are towns, too, in the sun: towns, mountains, ­rivers, flowers, and a tremendous variety of plants, but the matter of which all these things are made is quite different from that which exists on Earth. If none of this existed, both Hermes Trismegistus and Jesus would have been speaking nonsense.”

Aivanov says that the sun is “a whole, fast world that contains living beings, dwellings, palaces, trees, cities and oceans—a world with a culture that is beyond anything you can imagine. It is the loveliest of lands, the ‘land of the living’, which is spoken of in Psalms: ‘I will walk before the Lord in the land of the living.’ ‘The living’ are the immortal eternal beings who dwell permanently in light. The sun is their abode, they send us their light. The sun is the most marvellous of worlds, peopled with angels, archangels and divinities, who go to and fro, to work in each one of the planets and help the creatures who inhabit them before returning once more to the sun.” Aivanov didn’t just make this up from an over-blown imagination, but shares a glimpse he himself experienced.

Every ray of sunlight that reaches us is im­parted with three qualities: with movement, light, and warmth. Movement corresponds to the Father’s will, the light embodies the Mother’s wisdom, and the warmth is the expression of Love—the ‘child’. Will-Wisdom-Love is the true divine trinity.

End of extract „The Sun: Source of our Being“

In his inimitable way, Aïvanhov explains the many and varied ways that we are children of the sun, as well as how we can become its equal. These words are not simply balsam for the soul; they will also fire your imagination. Find the full article in our Facts are Facts print edition no.11.

Read here how the Universal Spirit created our universe and how solar systems are born and fade away: Cosmology: Born of the Spirit