Cosmology: Born of the Spirit

The universe wasn’t created by the Big Bang, but by the Creator. Galaxies form, fall apart, and form anew—for as above, so below.

God exhaled the universe. And when the time comes, God will inhale it again. So it is written, and so it will be.

In between lie eons in which life can mature. Just as the human heart beats to a rhythm and air flows through our lungs, the galaxies themselves pulsate. They too are born, wax, and shine brightly in their fully developed light before waning, ready for a new, higher birth.

It’s the eternal circle of life, the breath of the cosmos. Yes, space breathes too. This steady breathing is an act of creation: the magnetising in-breath, the pause and magnetising absorption, followed by the conscious out-breath and finally the renewed pause, the shining projection. 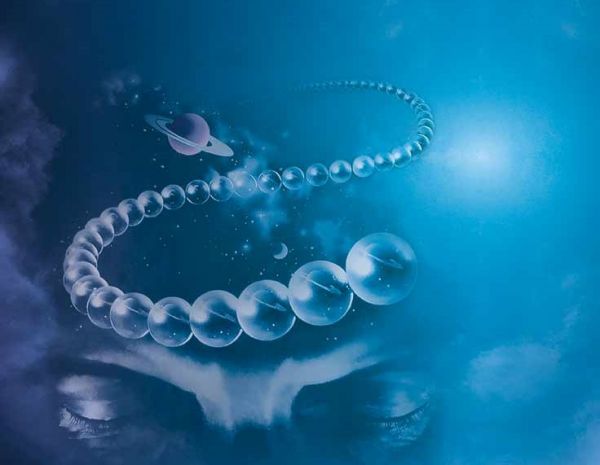 The solar Logos thinks and breathes its planetary system out into space.

Everything was created in this way. It’s no coincidence that many breathing exercises are based on this four-part rhythm1. It’s called precipitation breathing and anyone who’s tried it will know how fast the body begins to vibrate with energy. People today inhale and exhale without pausing, but it is believed that the earliest men to set foot on this planet breathed in this powerful, rhythmic way.

In the phase of expansion, the great ­central sun exhaled the suns of its galaxy, and the suns, in turn, exhaled their planets along their pre-ordained orbits. The suns were sent off into the galaxy one after the other, like a string of pearls. Aligned vertically one above the other, they took their places orbiting the central sun. Then the suns exhaled their planets in the same way, but this time on a horizontal plane. First came the first planet on the innermost orbit. After that, and at the same time, the first planet moved onto the second orbit and the second planet filled the first orbit. Next, the first planet entered the third orbit, the second planet moved onto the second orbit, and the third planet was exhaled onto the innermost orbit. The process continued until all the planetary systems were complete, circling one above the other.

According to theosophical sources, our tiny system consists of seven suns, each with seven planets. Together, they form a ‘grid’ of 49 planets, most of which are not visible to the eye, as they vibrate on a higher plane.

Supposedly, some of the planets of our ‘official’ solar system actually belong to other systems, and orbit different suns. That’s not as strange as it sounds; since the systems lie right on top of one another, it really does look like these planets are orbiting our sun, although they are in fact really orbiting a different sun on a higher or lower ‘level’. The ‘gaps’ that are left in our system are filled by (up to now…) invisible and therefore unidentified planets.

In the phase of projection, as the galaxy ‘holds its breath’, evolution follows its developmental path to maturity. Then the galactic in-breath begins, pulling all the planets into their suns, and then all the suns into the central sun. This doesn’t mean that everything is actually being ‘swallowed-up’—it simply means that all life joins in the central sun’s vibration.

As we understand time, the length of these cycles is almost immeasurable, but the life of a planet is still strikingly similar to the life of a human being. “Every globe goes through a seven-stage development period before it reaches maturity,” wrote the Indian Mahatma Kuthumi Lal Singh at the end of the 19th century; and during the first seven months of pregnancy, humans also develop from mineral to animal, and then from animal to human being in the last two months. Kuthumi said, “A planet also has its two periods of teething and shedding—the first rocks, which it shakes off to make room for others, and its ferns and mosses, before the forests come.”

When the cyclical creation of a planetary system begins, only cosmic dust exists. An impulse of will condenses this dust into a cloud of fog-like material. Three developmental phases of natural forces follow, invisible to the human eye: the Water Nymphs, the Gnomes of the Earth, and the Fire Salamanders are created, the animalistic soul of the planet. Only then does the fiery creation of the tangible globe begin. The first visible stage, the mineral, is already the fourth stage in the evolution of a planet. At first, its layers are soft and ­fog-like, and only little by little do they ­condense and harden.

It is at this point that the second planet of the system starts to become visible. On the first planet, the plant kingdom begins to develop. The next evolutionary stage sees the third planet solidify, the second planet develop a plant kingdom, while the first planet develops an animal kingdom. In this way, each wave of generation creates a new planet, while evolution strides forward on the preceding ones, until finally man appears. His body too, at first half ethereal, materialises more and more, descends ever more to the physical (as an instinct-driven caveman), before finally rising again into the light.

That is the meaning and destiny of solar systems and the creatures that develop in them: being born out of the light, descending into dense matter, and then ascending once more into the eternal. The Earth has passed the nadir of its evolutionary arc—now, the ascent into the light begins. One step ahead is Venus, a planet that for our consciousness is very highly developed, and which doesn’t belong to our solar system. Venus is the only physical planet in its system. All the others exist in higher worlds, some even in Nirvana. What it really means to live on a planet that orbits on such a high spiritual plane is something that we mortal humans cannot even imagine.

When the mineral kingdom develops on a planet at the same time as the human kingdom on another, it’s obvious that men will have come to the end of their development much sooner. For this reason, between the individual cycles there are so-called ‘breathers’, in which men ‘wait’ in interplanetary space for the other kingdoms to develop, so that all can end their evolution at the same time. This too is something that we can’t comprehend—after all, the human race is earthbound, isn’t it?

If you’d like to think more deeply about these cycles, remember that during the next phase the life essence of the mineral kingdom incarnates in the plant kingdom of the previous planet, and so on. That means that modern man formed the animal kingdom of the moon in the last cycle (the moon was our predecessor planet in an earlier system). Now that’s something to think about!

Speaking of the moon—what we see in the night sky are the last remains of a once large and living planet. Today, the moon is lifeless and exists in a ‘death’ phase, the Prana having been taken from it.

After the completion of certain long cycles, the evolutionary target having been reached, the cosmic in-breath begins. The Logos draws itself inward, magnetism ceases, and structure collapses. This is how solar systems ‘die’, how they are ‘destroyed’. But fundamentally, they are not destroyed, but rather dissolved and transformed, for their matter remains and is filled with hard-earned love and wisdom. When the solar system re-forms, it can vibrate on a much higher plane. Isn’t the human cycle of re-incarnation just the same?

End of extract „Cosmology: Born of the Spirit“

In the following report we learn about the metaphysical significance of the words of creation “Fiat Lux” – let there be light. We also deal with the sevenfold matter Furthermore, the American universal genius, Walter Russell, provides a clear explanation as to why the flame of Jupiter is colder than ice, and how the heat of the sun is no more intense than a blazing summer’s day on earth. We can guarantee that you will never look at astrophysics the same way again! Read the full article in our Facts are Facts print edition no.11.

Read here what the great adept Omraam Michael Aivanov believes about the culture of the sun: The Sun: Source of our Being