More and more, cheaper and cheaper—globalisation is making it all possible. Yet this ‘dream’ of unlimited economic growth comes at a terrible price. We are suffocating the planet under a pile of rubbish, and ruining our health in the process. 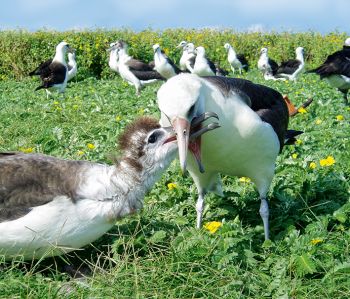 If we continue depleting our planet as we have till now, we will soon begin to notice that “you cannot eat money.” For the Hawaiian albatrosses, the Cree Native American prophecy has already been fulfilled in a particularly gruesome way. Since time immemorial, large flocks of these sea birds have made their home in the north of this holiday idyll where the coastal waters offer plenty of food for a hungry albatross. Despite this, increasing numbers of these majestic gliding birds are starving to death or dying of thirst. On some beaches—closed to human visitors­—their carcasses are strewn across the sand. Although the birds had no contact with people, mankind is still to blame for their agonising death. One look at the half-rotted cadavers makes it quite clear why these poor birds starved to death: their stomachs were so full of undigestible ‘food’ that there was no space for fish. As the feathered bodies slowly go the way of the flesh, ostensibly harmless everyday items are revealed. And this is precisely what makes them so terrible: snow-white golf balls, plastic cutlery, lighters, rubber tyres from toy cars, plastic soldiers… all of it trumpery, as durable and pristine as a memorial cenotaph decrying the madness of our disposal society. On Hawaii alone, more than 200,000 albatrosses eat themselves to death every year because of the excessiveness of a civilisation that is conditioned to consume.

Perhaps in the very near future, this entire surfers’ paradise will be no more than a painful memory. Increasing numbers of once virgin beaches are turning into huge rubbish heaps, overflowing with tons of plastic waste. The perhaps rather careless hordes of tourists or inhabitants are not to blame; rather, it is the ocean that spits up this rubbish. The dolphins on Hawaii’s coasts have recently been spotted playing with plastic bags—“Possibly one of the saddest things I’ve ever seen in my life,” comments surfer and deep-sea diver Morgane Turband. It is no rare occurrence to find bits of plastic blocking the airways of these marine mammals.

Plastic: the blessing and the curse of our wealth. It was only after the Second World War that this extremely versatile crude oil product began to conquer the globe. By the 1980s, the worldwide production of plastic had overtaken that of steel and today 250 million tons of the stuff is produced every year. Let’s take the example of plastic bags: the number one consumable item in many countries all over the world. We use 500 billion of them every year, or, more accurately, we throw them away. In the USA alone, that’s 60,000 of them every five seconds. And then there are the plastic bottles. Americans spend twelve billion dollars every year on mineral water and thus use two million plastic bottles every five minutes. If you’d like an idea of how much crude oil has gone into a plastic bottle, just fill a quarter of it with water.

Plastic is very cheap to make, extremely resistant—but not biodegradable. Most of it ends up in the sea at some point—out of sight, out of mind. Scientists had already predicted as far back as 1988 that areas resembling gigantic rubbish dumps would soon appear in the world’s oceans. Powerful currents create whirlpools measuring way over a thousand kilometres, where masses of water slowly revolve and collect the rubbish floating in the sea as they do so. In 1997, the Great Pacific Garbage Patch was finally discovered in the northern part of the ocean. Four times as big as France, it hit the headlines all over the world. Yet such drift rubbish does not just rule the North Pacific: hidden from the public eye, similar garbage patches are spreading in the South Pacific, the North and South Atlantic as well as the Indian Ocean, albeit not on quite the same scale as the Great Pacific Garbage Patch. The man who discovered it, Captain Charles J. Moore, talks of an “island of plastic”, a misleading term since the sea looks the same there as anywhere apart from the countless numbers of large bits of plastic clearly visible in the water. Environmentalists sarcastically joke that they no longer need to go shopping, because sooner or later everything will drift past them anyway. 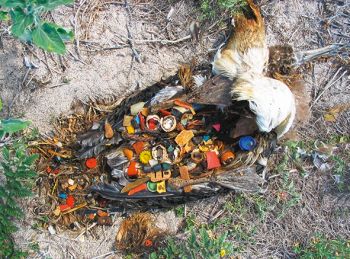 Plastic parts instead of fish: albatrosses are dying in the hundreds of thousands, because they feed on human rubbish.

Can it really be as bad as all that? Yes, and more so. Just like the sinking of the Titanic, the greatest danger is invisible—only this time it threatens to rip open the hull of the entire Starship Earth. It lurks in the upper layers of the sea water and can often only be detected by microscope, since plastic does not decay and does not dissolve; rather, it simply shatters into tiny pieces that we can’t see. This happens in the soil as well as in the sea. If we take water samples, for example from a depth of thirty metres, a murky broth emerges. Greatly magnified, this often gelatinous and icky mass becomes a sea of the tiniest plastic fragments. And that is disastrous. The smaller the plastic particles, the higher the concentration of toxins in them. Like sponges, these absorb chemical and pesticide residues from the water. And because they are as small as plankton, the basic foodstuff of all sea creatures, this plasticised cocktail of toxins is eaten and thus enters the human food chain. But that’s not all.

Without plankton, the oceans would die and with them all land creatures too. No one knows quite how much plankton is contained in the world’s seas but it is worth considering the fact that the soupy liquid from the Pacific Garbage Patch contains on average six times as many plastic particles as plankton. That’s possibly hundreds of millions of tons of this synthetic material in total.

A disposable society might be profitable for the economy, but the planet is slowly but surely choking under a pile of garbage. We are the only ones that can do something about it today—by changing our consumer behaviour! In the documentary Bag it, which explores the avalanche of plastics around the world, Jeb Berrier gives the following advice: “Reduce single-use disposables. Don’t drink bottled water. Choose products with less packaging. When you need something, buy it used. Think outside the bag—bring your own container. Buy less stuff. Recycling comes after reducing and reusing. Volunteer to clean up the environment in your area. And above all, simplify your life. Rethink how we do things—it all comes down to common sense.”

Can we mere mortals actually change something and by doing so create a global effect? Yes, we can. Little strokes fell big oaks, quite apart from the hundredth monkey phenomenon: more and more people behaving in an environmentally friendly way will spread to most of us at some point. Sparks fly as if of their own accord to vast swathes of people and changes in mankind’s consciousness become manifest—changes previously thought impossible. Such as in 1958 when Japanese scientists discovered that mokey colonies on different, isolated islands suddenly began washing dirty potatoes in the sea before eating them—a behaviour that had previously only been exhibited by the monkeys on the island of Koshima.

Ken Noguchi doesn’t want to wait a­­­­­­round idly for the ‘hundredth monkey’—he’s already making sparks fly. The young Japanese mountaineer initially became known around the world for his daring ascents, but now he is drawing global attention with his commitment to a cleaner nature. Since 2000 he has collected almost ten tons of rubbish on his climbing tours—even at the roof of the world, where tents, kilometres of ropes and hundreds of oxygen bottles are polluting the icy flanks of Mount Everest. Japan’s emblem, the volcano of Fujiyama, is also degenerating into a dump. Every summer 300,000 people visit the mountain and leave piles of rubbish on its forested slopes. Ken Noguchi wants to change this and began gathering volunteers to work on clea­­­­ning campaigns. In the first year, one hundred people res­ponded to Noguchi’s call; the next year it rose to 600; 1,500 in the third year and over 7,000 people a few years later. “After ten years of cleaning up rubbish, I believe that many small steps can lead to extra­ordinary changes,” he tells French film-maker Yann Arthus-­Bertrand. “So I’m an optimist. If we do something together, then we can achieve something.” Or as the American anthropologist Margaret Mead put it: “Never doubt that a small group of though­tful, committed citizens can change the world. Indeed it is the only thing that ever has.”

We are also going to take you on a unique world tour, where we explain how and where on this planet the individual components of our jeans are produced – and why this is as damaging to the environment as it often is to the health of those who wear them. In addition, an excursion to the land of statistics demonstrates how there’s more truth to the slogan “Shop till you drop” than you might like to think. Find the full article in our Facts are Facts print edition no.12.

Further information about the health risks presented by our world’s inescapable plastics can be found here.
(Link auf Plastik-Artikel der FaF No. 12)