The Yin and Yang in our Heads

The left and right halves of the brain complete each other like the two halves of an orange, and hide within them the secret of divine inspiration. 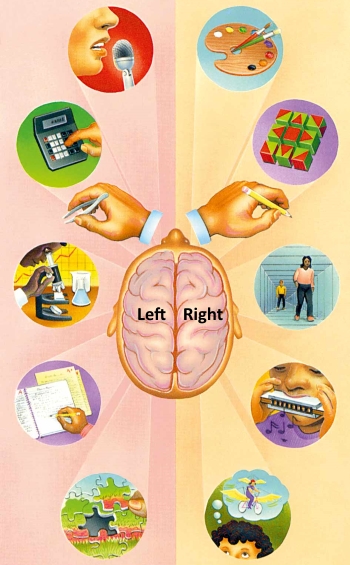 The interplay of the left and right halves of the brain.

Whether you believe it or not, we are all dimwits. You and me, we move through life with an imbalance that is frightening—all the more so since most of us aren’t even aware of it. It is actually no coincidence that our brain has two parts, a faithful likeness of the all-encompassing natural law of yin and yang. The one cannot exist without the other and both must be in harmonious balance in order to develop their full potential. ­Partnerships between men and women are just as governed by this cosmic principle as the cooperation of the two hemispheres of the brain.

The left—male—half of the brain analyses with razor-sharp intellect. The right—female—hemisphere, on the other hand, is dreamy and creative. They complete each other in various and marvellous ways. But only someone who recognises that a person is more than his body, and that his consciousness does not live in his brain can comprehend this—someone who understands that we do not think with our little grey cells.

Thinking is an etheric activity that takes place in our subtle mental body. Our brains must then convert these ethereal impressions into matter i.e. make pure thought real. That is why, incidentally, the spoken word is so important: it sends out physical tone vibrations that help thoughts anchor more firmly in the physical world.

The right brain half is our personal ‘hot line’ to God. In it, we each have a kind of private ‘home movie theatre’ in our heads where divine ‘blockbuster’ films are played continuously (and free of charge!)—films that are the most nourishing for the development of our individual consciousness. But however different all these films might be, they all have the same title: Inspiration.

This word is derived from the Latin and literally means ‘to breath into’. It contains the word ‘spirit’, too. Inspiration is thus a spontaneous suggestion by the divine spirit—admittedly a somewhat out-of-fashion translation.

The Inspiration of Johannes Brahms

Someone who still believed in the divine source of inspi­ration was the German composer Johannes Brahms. In late autumn 1896, four months before his death, Brahms spoke with the US American violinist Arthur M. Abell about the source of his art: “When I feel myself at the height of my creative powers in my work, I also feel that a higher power is working through me.” 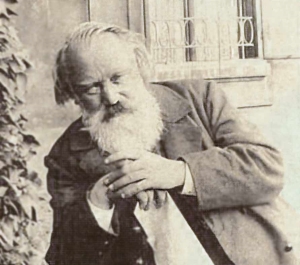 In answer to the question as to how one comes into contact with this power, the composer answered: “It doesn’t just happen by wilfully controlling conscious thought, which is a product of the physical realm and which dies with the body. It can only happen through the inner power of the soul—through the true Self, which outlasts death. These powers lie dormant, for conscious thought cannot access them when they are not enlightened by spirit.”

With these words, Jo­­hannes Brahms drew an astoundingly accurate picture of the spheres of action of the left brain (which is oriented towards the physical world with its conscious thought) and the right brain (which is connected with the universal spirit). Before Brahms began composing, he always attuned himself to the Divine. Just as for Haydn, who always wore his best suit to compose in, the silent, focussed work before the slowly filling music sheets was a kind of worship ­service for Brahms. He spoke of vibrations that “thereupon ­im­­mediately” passed through him: “Then ideas that I was ­consciously seeking streamed through me with such power and speed that I could only ever take hold of a few. I was not able to notate them all quickly enough. They came like momentary lightening and quickly disappeared if I didn’t record them on paper.”

The right brain is the receptor for divine ideas that either come from the heart of our own God-presence or from the universal spirit’s all-present sea of ether. It is the canvas on which a river of images is painted, often so quickly that we can only “take hold of a few” (Brahms). The inner presence communicates in images (visions).

Thus the saying: ‘a picture is worth a thousand words’.

The Power of Silence 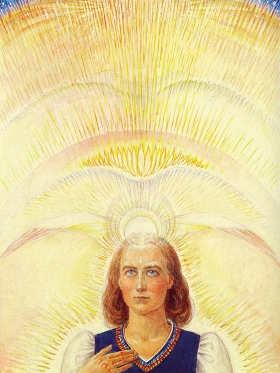 Divine inspiration flows into the right hemisphere of our brain.

Although we are continuously inspired by the Divine through the right brain, we usually don’t catch very much of these films. Our outer (left) brain makes sure of that. Techniques such as Image Streaming  can help with this. Meditation is another way, known for thousands of years. During meditation, the left brain is calmed to such a degree that it becomes possible for the right brain to communicate with us. Thought control is simply a slowing down of brain activity to the point that the voice of the spirit can be heard and is no longer drowned out by the cacophonic noise of the left brain. What do they say? Speech is silver, but silence is golden. This is the golden treasure of enlightenment that can only be found in stillness.

When Brahms composed, he was also in a condition where the rational left brain had been lulled to sleep. “I find myself then in a trance-like situation—a kind of hovering between sleep and wakefulness,” the artist observed, “I am still conscious, but also just at the point of losing consciousness.” In those moments Brahms experienced an enraptured state of truly divine contact. As a side note, this has absolutely nothing to do with so-called ‘channelling’ by trance mediums who fall in a completely ‘unconscious’ state—but who give up the conscious control of their bodies and completely give themselves over to an unknown power that cannot be of divine origin.

We can all communicate with the Divinity within when we keep the blabbering and over-blown left brain in its rightful place. Yes, its effect is essential, since it is the analytical ‘modem’ that observes the impressions that have been received and breaks them down into workable forms. Unfortunately, the average person identifies himself so strongly with his physical body that his brain has become lord of his thoughts. Just like robots, the five senses constantly transmit their impressions to the left brain (as they should). These impressions are naturally subject to the limitations of the material world. They are finite.

Since most people only consciously use the left side of the brain, every thought is viewed from a confining materialistic ­viewpoint. But what happens when an impression is received, not from the material limits of the five senses, but from the infinity within?—Then these divine thoughts, predominantly saved in the right brain, are quickly discarded as worthless by the external consciousness of the left brain. It doesn’t know what to do with them or doesn’t think their realisation is possible because the finite can never comprehend the infinite.

Our consciousness is usually dominated by an overpowering left-brain. Thus only half of our brain is active—and we are dimwits! The other common term—half-wit—says it even more clearly: we only use half our wits.

On the other hand, when Johannes Brahms composed, he swam in the borderless sea of divine spirit where everything is possible and unspeakable bliss dwells: “It was always such a wonderful experience that I could never bring myself to talk about it earlier. I felt as though I were in consonance with the infinite in that moment and no other thrill comes even close.”

Man expresses himself through four different vehicles of which we can only see one: the physical body. In our subtle emotional body we create feelings; we think with our mental body—and thanks to our etheric body, we remember.

Nevertheless, all of these consciousness processes are linked to the brain and engender a measurable effect there. If a certain area of the brain is damaged, we can no longer consciously access the corresponding brain functions, just like a telephone line that has been severed.

It’s no different with the memory. In reality, man has two memory systems: one we can easily access, and another where this is not the case. We have a memory that keeps learned knowledge from this earth life available for immediate and effortless retrieval—our left brain. But our etheric mind sits in the right brain, which saves not only a duplicate of the above-mentioned memories, but also all the experiences we have ever had during all our incarnations, even back to the time of our actual birth as an individual spiritual spark.

Now if the external consciousness of the left brain is turned off (for example, through hypnosis), it is possible to expose the memories of the unconscious that are interlinked with the right brain. We will remember things long forgotten, things that may have happened in an earthly life before this one.

If a person’s consciousness is sufficiently highly developed—if he has achieved sufficient conscious control over his right brain—the “veil of forgetfulness” increasingly and naturally becomes thinner and thinner, and he will remember things that he experienced in a previous life.

The Present Is All That Matters

Admittedly, it is very good that we are not normally able to access our own etheric records whenever we feel an impulse to do so. God knows, we have enough to work through in this life—imagine if we also had to grapple with the complications of our previous lives! We could never move past coping with our past!

We already live all too often in the past as it is. We dwell on it and don’t realise that that is the biggest stumbling block for our spiritual development. We hold tight to pictures and ‘souvenirs’ from old experiences and this has the effect that our attention is torn away from the present—from the NOW.

But there is nothing other than now. Nothing else is real; it is a lie with which we fool ourselves. ‘Time’ only exists in our human consciousnesses. The past is history and no longer relevant; the future has not yet happened. So where is reality?—Reality can only exist in the present. Acknowledging this is perhaps our hardest test. Because ‘tomorrow’ will never come. And as long as it’s not there, it doesn’t play a role. And when it comes, it is no longer ‘tomorrow’—it is NOW. Which is also why good intentions that we wish to implement tomorrow will never come to be. As long as we don’t do it now, it will never happen. And the world will not change for the better—or maybe just tomorrow.

End of complete article „The Yin and Yang in our Heads“

This whole article has been published in Facts are Facts print edition no.10.

Image Streaming - Our subconscious wants to communicate with us. So let’s learn how to pay attention. Find out more in our article Image Streaming: Films in the Language of God