Gymnastics for the Grey Cells

How can I start actively using my brain rather than simply owning it? Mental trainers are providing solid scientific advice for everyday life.

Many brain researchers believe that most people use only a limited percentage of their brain: a person is considered a genius if he exhausts more than ten per cent of mind potential. Yet it doesn’t have to be that way—because there are ways to bring those ‘little grey cells’ up to speed. 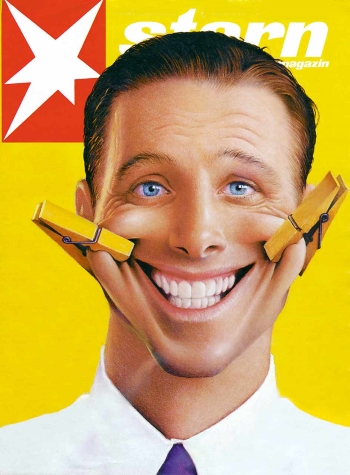 Brain-friendly working and learning: when ‘flow’ occurs in the brain, we feel naturally happy and can do without pegs.

Each person has about three pounds of brain matter. The grey cells, also called the cerebral cortex, form only a small part of this. Spread out, they would cover the surface of a tablecloth a few millimetres thick, albeit a tablecloth with truly magical properties.

As an embryo grows within the womb, 250,000 neurons or brain cells develop every minute. An adult may have 100 billion brain cells; that’s 90 billion white and ten billion grey. However, it’s not the neurons themselves that are important, but the number of connections that are forged between them i.e. the neural pathways. Ten billion grey cells can form over one thousand trillion (1015) direct connections amongst each another. That’s a ten with 15 zeros after it! If a computer were to count one neural pathway per second, it would spend almost 32 million years making its calculations.

And that sums up the brain’s vast mental potential. Whenever something makes an impression on us, a stimulus triggered in the brain forms a new brain connection i.e. a new neural pathway. If something ‘blows our mind’, so to speak, we will remember it for a very long time, but if something leaves us cold, we will soon forget it.

For this reason, a weak stimulus must often be repeated before a new neural pathway is built and the event is captured in the memory. The more strongly we are struck by an event or piece of information, the more quickly the ‘dirt track’ in the brain becomes a well-built ‘road’. ‘Highways’ in the brain allow for lightning-quick connections; on ‘dirt tracks’ the wheels of our grey cells turn more slowly and arduously.

We all know from experience that the strongest stimuli are always triggered when they are linked to intense feelings. Emotional moments remain enduringly in our memory, even when there is no repetition. They are like radiant (or shockingly dark) paintings hanging on the wall of our consciousness, releasing similar emotions whenever we view them in our mind.

Swimming Against the Current

A rolling stone gathers no moss, as they say. This well-known dictum can equally be applied to the brain—the more neural pathways we build, the faster it goes. In other words: the more frequently we learn, the easier learning becomes—regardless of what it is.

Our brain is possibly the most flexible organ in the body. The most fascinating thing about it, however, is that it can dissolve old neural pathways and replace these with new ones!

The German researcher Alexander von Humboldt once said: “It is perhaps bolder to doubt the Known than to explore the Unknown.” How true. We must sometimes be brave enough to throw out long-established and treasured ideas in order to adorn the walls of our consciousness with new pictures. This mental flexibility, however, seems almost impossible for some people. The phrase ‘You can’t teach an old dog new tricks’ would seem to hit the nail on the head here.

According to Vera F. Birkenbihl, it is precisely at this point that we decide whether or not we are prepared to actually use our brain rather than simply possess it. Many people, according to top German trainers, think exclusively along the neural pathways that were laid down overthe first twenty years of their life, moving along the well-trodden paths of the past and unable to open up to new things—forgetting what “Auntie Mame” tells us in Jerry ­Herman’s Broadway musical Mame (1966): “Open a new window, open a new door, travel a new highway that’s never been tried before...”

We often say, for example: ‘I can’t, it’s too difficult; I don’t have the talent for it.’ And as we do so, we build neural pathways in our brain that immediately trigger these feelings of aversion and failure whenever we are confronted with an unpleasant situation.

This is called negative learning, or self-fulfilling prophesy. We must therefore consciously ‘relearn’ by removing old neural pathways (thought patterns) and replacing them with new ones.

In other words, we should keep learning our whole life long. This will keep our ‘brain muscle’ fit, whose cells, incidentally, thicken just like a trained bicep.

Where does our consciousness dwell?

The answer to this question is still hotly debated today. Is our brain simply an unbelievably fine instrument on which the human mind can play virtuoso pieces, the control centre that transforms subtle thoughts and feelings into the material world of the body, as the occult lore of many cultures teaches? Or are those scientists correct who assume that the consciousness is actually seated in the brain? In any case, every thought, every emotion is immediately mapped in it. If certain brain functions are disrupted, a person cannot see, hear or speak; he cannot move or think clearly. In addition, the physical structure of the brain and its nerve cells changes when a person’s consciousness changes, too.

However: the brain cannot be the home of the conscious. Science itself has proven it, for example through the near-death experiences of people lying in a coma. Medically, near-death is meant when the heart no longer beats, breathing stops and the brain no longer shows any neural activity whatsoever. Neuroscience teaches that a person cannot have any experiences when the brain no longer works. Neuro-psychiatrist Peter Fenwick comments: “If someone can remember, even though his memory has been suspended, then one must assume that the information is first stored outside the brain and later anchored in the memory system.”

This is precisely what happens, in fact: all the experiences of a person are recorded in the so-called etheric body, one of a total of six subtle shells. Together with our visible physical vehicle they form the seven bodies of a human being.

In 1991 American singer-songwriter Pam Reynolds was deliberately made temporarily brain-dead because she was suffering from an almost inoperable dilation of the blood vessels at the base of the brain. Neurosurgeon Robert Spetzler from the Barrow Neurological Institute in Phoenix, Arizona, performed the difficult procedure. During the operation, Pam Reynolds was clinically dead for one hour.

“Pam’s case is unique, because she was c­onnected to medical instruments and was monitored the whole time, when she had her near-death experience,” explains cardiologist Michael Sabom. It is therefore true beyond a doubt that ‘the plug had been pulled’ on Pam’s brain at the time.

Despite this, she was able to remember how she jumped out of the crown of her head and observed the operation from about two metres’ up, totally uninvolved. She heard what the doctors were saying and was later able to describe the entire operation down to the smallest detail.

“I don’t understand how normal senses could possibly work when you’re brain-dead,” Pam’s surgeon Robert Spetzler openly admits. “I have no explanation for it. But I’ve already seen so much that I can’t explain. I am not so arrogant as to say that there is none.”

Brain specialist Peter Fenwick even goes one step further: “If such phenomena take place, then that means in fact that consciousness and the brain are not the same.”

End of extract „Gymnastics for the Grey Cells“

Would you like to know how to learn the ‘brain-friendly’ way (as effectively as possible and as efficiently as possible)? Would you like to know too how to get into the ‘flow’ and to take advantage of the Learning Curve to Mastery? Do you want to know how inspiration works, and how the two halves of the brain work together to make it happen? Then you should start reading issue No. 10. That’s the place where you’ll find not just the answer to these questions, but a lot more besides about the brain and how it functions. Read the complete article in the Facts are Facts print edition no.10.

Brain Halves - Their interplay holds the key to inspiration and an enhanced memory: The Yin and Yang in our Heads

Image Streaming - Our subconscious wants to communicate with us. So let’s learn how to pay attention. Find out more in our article Image Streaming: Films in the Language of God