The Illuminati and their actions from a spiritual perspective.

You must not lose faith in humanity. Humanity is an ocean; if a few drops of the ocean are dirty, the ocean does not become dirty. 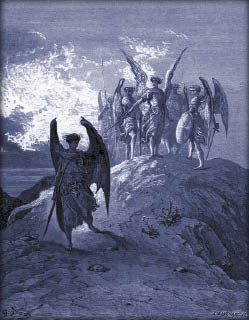 The Illuminati see themselves as the descendents of the fallen Angels, whose Lord is Lucifer.

According to their secret historical texts, the roots of the Illuminati are supposed to lie in the Garden of Eden. More precisely, in the Brotherhood of the Snake, which is supposed to have existed even before humankind was chased out of its earthly Paradise. From the Illuminati point of view, Lucifer was their God and Yahweh the god of the rest of mankind. According to them, it was Lucifer who gifted man with occult knowledge, whereas Yahweh jealously kept this from them. Yahweh wanted to control mankind and take away their free will. And so Luciferism developed and was practised by secret societies right down to the present day. That’s how the Illuminati tell it.

A confirmation of this is found in the Old Testament, which is of Jewish, not Christian, origin. The Old Testament was born from Kabbalah, which grew out of Judaism 600 years before Christ and united Babylonian magic and astrology.

The Illuminati claim that they descend from the ‘fallen angels’, from whom they supposedly received the ‘Ancient Wisdom’—also known as Kabbalah. These ‘fallen angels’ are referred to in Genesis,1 the first book of the Bible, and are called Nephilim, or “Sons of God”, who descended to earth and whose seed mixed with earthly man’s through marriage. Christian interpretations speak flatteringly of “mighty men”. Apocryphal Jewish texts explain, however, that these men were really Lucifer and his legions,2 who were chased out of heaven and took wives from Cain’s descendents. According to the Bible, they started a race called the Anakim. And the Illuminati teach that these beings from another world were the first to introduce mankind to the occult arts—including astrology, (black) magic, and alchemy.

The secret societies known today, including the Freemasons, the Knights Templar, the Knights of Malta, and the Skulls & Bones, etc. all have their origins in the Brotherhood of the Snake (mentioned above) which splintered into various lodges due to internal power games and quarrels. Even if the Blue Lodge Freemasons seem to be Christian, the secret higher levels are not, and the 31st, 32nd, and 33rd degrees are avowedly Luciferian.

Above even these higher degrees is the Order of the Illuminati, whose stated goal is world domination. Journalist Wes Penre writes: “Weishaupt planned to take over the world and he drew up cunning strategies to create a One World Government and a New World Order. This was all recorded in the so-called Protocols of Zion, which was probably compiled by Lionel Rothschild as a blueprint for the New World Order. Some people say that this document is a forgery. It doesn’t matter who wrote it; when you read it, you know that it provides a surprisingly precise template for the Illuminati’s program and that everything contained in it has either already happened or will happen soon. When a document so precisely describes what actually happens, it can hardly be called a forgery.”

Anyone who studies the long history of secret societies will at some point ask themselves how some of the noblest minds in the history of mankind—e.g. George Washington, Wolfgang Amadeus Mozart, Leonardo da Vinci—could be members of societies that today can only be seen as the breeding ground of all that is evil. How can this be? Did all those men only appear to be good? How could that be, when their fruit still provides such a wonderful harvest today? Aren’t we supposed to know a person by their fruits? Yet, isn’t there every evidence that these old lodges viewed Lucifer as Lord?

The answer to these riddles lies in the figure of Lucifer himself. He is basically Janus-headed. For although the old Kabbalists worshipped him as the dark god, Baal, who taught them the dark side of magic, there are also very different definitions and views of Lucifer.

Ancient esoteric philosophy describes Lucifer as those aspects of the divine Trinity that correspond to Wisdom, or God’s “mind”. Helena Blavatsky writes in her book The Secret Doctrine: “But in antiquity and reality, Lucifer, or Luciferus, is the name of the angelic Entity presiding over the light of truth as over the light of the day.” Blavatsky adds that this “Holy Spirit”, according to the gospel of the Pistis Sophia resides in the planet Venus,3 or Lucifer.

So here Lucifer is nothing more than a label for the divine light, the divine, intelligent energy that flows through the entire universe. Thus the name: the Latin word “Lucifer” means “light-bringer”. How, then, could Lucifer degenerate into a malicious daemon?

By man’s decision to be wicked! For it is man who qualifies this energy, also called astral light or Akasha, through his feelings, thoughts, words and actions as either good or evil every hour, minute, and second! Man created the “Devil” when he forced “Lucifer” to become evil and “fall” in vibration. And so “Lucifer” can be both God and Satan—according to how we think, feel, speak, and act. Blavatsky explains it thus: “Lucifer is divine and terrestrial light, the ‘Holy Ghost’ and ‘Satan,’ at one and the same time,” for “…it is mankind which has become the ‘Serpent of Genesis,’ and thus causes daily and hourly the Fall and sin of the ‘Celestial Virgin’ — which thus becomes the Mother of gods and devils at one and the same time,” depending on whether they act graciously and beneficially or whether they attract the shadowy powers that kill and destroy through wicked deeds. First, man created the astral daemons through his own wickedness—and then he used them for his own base magic, summoning them in rites and beseeching them to fulfill his self-serving lusts and desires… which makes him, in turn, dependent on them, even selling them his soul.

Some of you will know the phrase "daemon est deus inversus", or in other words ‘the demon is the reversed image of God’. We explain why Evil always works with the reflection or reversal of the Divine – and which often everyday things or actions we should beware. Read the full article to find out what former Illuminati members have revealed about its secret rituals and "education" based on psychological terror. This is a must-read article to learn what we must look out for if we choose to join the powers of Good. Read this article in our Facts are Facts print edition no.5.

Start reading our ten-page exposé on the Illuminati: Illuminati: A Glimpse Behind the Scenes

Read here about the actual steps being taken by this secret society to force the whole world under its yoke: The Goals of the Illuminati

Resignation is useless: find out here how each of us can support the forces of Good and how we can work with angels: The Triumph of Good: Let the shadows abate!