Healing with the ‘Breath of Life’

Illness manifests itself in our etheric body long before we experience it physically. Pranic healing works on disease or sickness in the place it first emerges—often before we even realise it’s there. This ‘no-touch’ method of healing activates the power of self-healing, harmonises energy imbalances in the etheric body, and strengthens life force. And it often works where all other medicine has failed.

“The situation was serious, but not hopeless—even if it felt that way at times.” Eva Berger1 , in her early forties, had been suffering from burnout for a few years. “For years, I was treated on all possible levels: with a potent cocktail of vitamins and a vegetable ­powder on the physical level, and with homeopathy and Bach flower remedies on the higher levels. I did gymnastics to build up my strength and went walking in the countryside a lot. My condition did im­prove somewhat, but I still felt as if I was about to stumble into the abyss. Just one wrong move, one false step, would plunge me into a new, deep state of exhaustion.” A saliva test had revealed that Eva was actually healthy. But the fact was that tests showed eleven times that her nerves were weakened and overburdened—in­­deed, practically shattered. Sometimes she was virtually unable to work on the computer at all for weeks at a time, because after a quarter of an hour piercing neural pain would occur in her arms and then spread throughout her body. So Eva Berger received a carefully prepared spagyric remedy to treat her nerves. 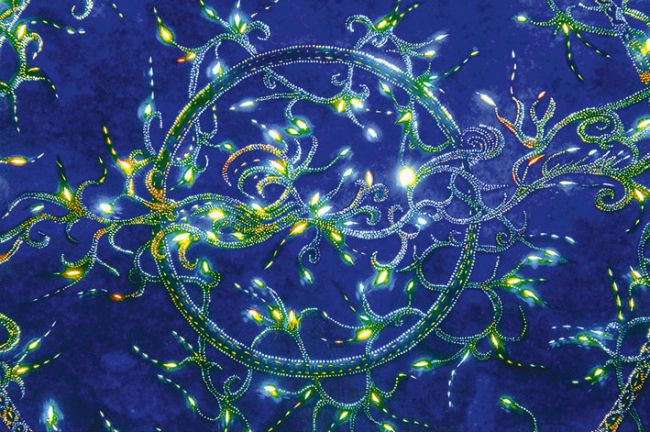 Although she was very eager to undergo the spagyric treatment, the end result was terrible: a hyper-sensitivity to all noises or other sensations that bordered on the hysteric. It also caused neural pain (ap­­parently without external cause) and an un­­controllable twitching of the eyebrows and mouth, which was particularly troublesome.
If Eva Berger had been a bundle of ner­ves before, she was now completely at her wits’ end. “I was about sixty per cent un­­able to work in what was supposed to be my prime. My kids had a mother who could no longer bear even the slightest thing, and my husband had a wife who wasn’t acting like a forty-something wo­­man, but an ancient old crone.”

Yet then something wonderful happened. A friend suggested that she go to a pranic hea­ler. “Anita Schenk trea­ted me for one and a half hours, and I left her practice like a woman reborn! I hadn’t felt so fit and alive for the last fifteen years; I was fizzing with energy

—whereas before I could hardly lift a finger be­­cause I ran out of steam so often. The neural pain was now a thing of the past, just like the heavy fatigue and un­­predict­able attacks of exhaustion. One week later, Anita Schenk treated me again for the onset of menopausal complaints, after which I no longer felt any ovarian cramps, and hot flushes were rare. I am eternally grateful to have discovered pranic healing. It has literally given me back my life!”

Those who believe that pranic healing belongs to the raft of ‘miracle cures’ would be wrong. Even though it comes from a Filipino man of Chinese origin by the name of Choa Kok Sui, it has nothing to do with “inexplicable spiritual healing”, but is instead based on treatment methods that have been researched for many years and can be learned by almost anyone. Pranic healing tackles illness where it first emerges: in the person’s etheric body. The etheric body is an (to us) invisible layer of energy that surrounds the human body, similar to the health aura that can be made visible through Kirlian photography.

Just as the physical body has vessels through which blood flows, the etheric body also has fine invisible channels or meridians, through which chi—also cal­l­­ed bioenergy or bioplasma—flows and is ­distributed throughout the whole body, nourishing and reinvigorating as it goes (see FaF 11, page 55). In order for life to be possible at all, the body must be supplied with prana, or chi (life force). If a part of the etheric body is weakened, this causes either a lack of prana or a blockage: the energy cannot flow as it should. If the condition lasts over a long period, sooner or later an illness will manifest itself in the physical body.

Choa Kok Sui, the founder of pranic healing, had been exploring paranormal phenomena since early childhood. For more than 30 years, he had devoted himself—in close collaboration with Yogis, healers, clairvoyants and medical practitioners—to researching pranic healing. His vision was to make this simple and ef­­­­­fective treatment available to everyone.

In principle, pranic hea­­­ling is related to acupuncture and acupressure, the difference being that the latter treat the meridians of the physical body with needles and pressure, while pranic healing deals with the meridians of the etheric body and the chakras. Choa Kok Sui explained the process thus: “Light can affect chemical ­reaction. This is the basis for photography. In electrolysis, electricity is used to ­ca­­­­­­­­­ta­­­­­­lyze or produce chemical reaction. In pranic hea­­­­ling, pra­na or life ener­­gy serves as the catalyst to accelerate the rate of biochemical reactions invol­­ved in the natural healing process of the body. When pranic energy is applied to the affected part of the body, the rate of recovery or healing increases tremendously.” This therefore has ab­solutely nothing to do with ‘miracle healing’; it is no more than the drastic acceleration of the body’s ability to self-heal. The fact that Science is not yet able to measure or substantiate life force, or pra­na, does not mean that it does not exist, or influence our corporeal wellbeing. In earlier times, people did not know about electricity, yet it was al­­ways there!

Pranic healing can also be used as a complimentary therapy if the patient is being treated with something else—even controver­­sial chemotherapy. “The patients don’t feel as sick; they seem to tolerate the chemo better,” explains Anita Schenk. Pranic healing always encourages, strengthens and accelerates the body’s process of self-healing, as it works to rebuild an optimal energy relationship.

Choa Kok Sui answers the question of what can be achieved by pranic healing in his book The Ancient Science and Art of Pranic Healing: “It can help parents bring down the temperature of their children suffering from a high fever in just a few hours, and heal it in a day or two in most cases. It can relieve headaches, gas pains, toothaches, and muscle pains al­­most immediately in most cases. Coughs and colds can usually be cured in a day or two. Loose bowel movement can be hea­led in a few hours in most cases. Major illnesses such as eye, liver, kidney, and heart problems can be relieved in a few sessions and healed in a few months in many cases. It increases the rate of healing by three times or more than the normal rate of healing.”

Of course, this requires from the healer a certain degree of experience and compe­tence. Training to become a pranic healer is therefore divided in­­­­­to various stages. Be­­ginners are not permitted to deal with ­dif­ficult cases in order not to aggravate an ­illness through lack of know­ledge. Unlike Reiki, these courses do not cost thousands and thousands of euros.

There are no ‘initiations’. “You can’t buy an initiation,” says Ani­­­­ta Schenk decidedly. “You have to earn it.” Anyone who practises pranic healing also believes that one must be prepared to work on perfecting one­­self, and always stri­­ve for purity of thought and feeling. To start each pranic healing session, the healer prays and asks for divine power to flow through him or her. Firstly because this strengthens the healing effect enormously, secondly to ensure that the healer lets the force of God flow through them and does not use his or her own energy on the pa­tient. “Trying to use your own energy would be like going shopping at the supermarket with­­­­­­out any money,” laughs Anita Schenk. It’s ultimately a blind alley and a sure way to bring lots of problems on yourself!

The healing method is essentially easy to learn. “Any healthy per­­­son with average intelligence, an average ab­­i­­­lity to concentrate, an open but discriminating mind, and a certain degree of persistence can learn pranic healing in a relatively short period. Pranic healing is easier than learning to paint or play the piano. It is as easy as learning to drive. Its basic principles and techniques can be learned in a few sessions. Like driving, to achieve a certain degree of proficiency requires much practice and time,” Choa Kok Sui goes on.

Healing Before an Illness Becomes Physical

Clairvoyants are able to recognise an illness in the etheric body before it manifests itself in the physical body. The bioplasma energy at the affected point is wea­­­ker and of an anomalous colour (often greyish, or a dirty yellow/red for cancer). Given that a pranic healer is not usually clairvoyant (Choa Kok Sui was not, either), they will learn to sense the points at which there is a lack or blockage of prana by reading the etheric body. Thus it could be that the pranic healer senses that a case of jaundice is afoot (a grey film, i.e. energy deficit, noticeable over the solar plexus and liver area), while physical examinations and diagnoses report the opposite.
If the person is not treated with pranic healing at this stage, it is inevitable that the illness will break out in the physical body weeks or months later.

End of extract „Healing with the ‘Breath of Life’“

Our article describes all the main chakras of the human body, as well as their physical and spiritual roles. We explain how and why emotions can cause illness. You will also learn how important the etheric protective field is for each energy chakra, and how psychological disturbances and even the phenomenon commonly known as ‘possession’ are connected to our etheric bodies. Take a look at the work of a prana therapist and read about some amazing healing success stories.

Find the full text in our Facts are Facts print edition no.12.

Read our inspiring article about prana, Prana: The Fiery Breath of Life.