Epidemics could finish off more people than war and starvation within a very short time. What if someone were to take advantage of this?

A question that more and more people are asking: can vaccines be specifically used as weapons against the immune system?

It’s like something out of a disaster movie: in Kiev, capital of Ukraine, many people will only dare go out if wearing a mask. President Juschtschenko declares a state of emergency for the whole country, as nine regions in Ukraine have already been placed under quarantine: public events and church services are no longer permitted and face masks are mandatory. About half a million people are thought to have fallen ill. Three hundred have already died and there is unofficial talk of three thousand dead: in short, Ukraine is in the grip of the swine flu.

The pictures flickering on the TV screen in October 2009 are bizarre—you don’t really know what to make of it all. Is it just a tasteless and cynical attempt by political opponents to exploit the hysteria around the demonstrably harmless swine flu for an election campaign? The media saw nothing worthy of interest in the reports from the Ukraine, nothing that needed to be examined more closely. Astonishing when you think of it, because there would have been plenty of material here to substantiate the alleged high risk of the dreaded swine flu. An exception was British newspaper The Daily Mail, which quoted a doctor from western Ukraine: “We have carried out post mortems on two victims and found their lungs are as black as charcoal. They look like they have been burned. It’s terrifying.”

Virologists on site feared coming into contact with a dangerous mutated swine flu, or a previously unknown flu virus, so samples were sent to a specialist lab in London for analysis. We are still waiting for the results to be made public.

Cut back to the Ukraine. Date: 30 October 2009; the pandemic is raging. Place: the Desniansko district in Kiev. Mounting eye-witness reports claim that small planes are spraying chemtrails, supposedly to counteract the swine flu. Yet the government denies this: no authorisation appears to have been given for any plane to fly over the city. Many residents claim, however, that the aerosol stank like chicken faeces and led to severe skin rashes in some people.

Just a Hunch or Insider Knowledge?

Fade back a few weeks to the recording studio of American radio station Republic Broadcasting several thousand miles away. On 11 August 2009, radio host Dr. True Ott received a highly curious phone call just at the end of his live show. In it, one Joseph Moshe explained to the astonished listeners that he was a microbiologist with explosive evidence that he wanted to pass on to a state’s attorney.

It apparently had to do with a contaminated H1N1 swine flu vaccine produced by American pharmaceutical company Baxter in the Ukraine that was, in reality, a biological weapon. According to Moshe, an adjuvant had been mixed into the vaccine, which was supposed to weaken the immune system and apparently contained the RNA component of the virus that caused the deaths of millions of people in 1918—the Spanish Flu. The caller announced that there could well be an outbreak in Ukraine in the near future.

The actual identity of the Joseph Moshe living in California has not yet been confirmed. Some claim it was Israeli professor Bar-Joseph Moshe, although this is highly questionable. However, it is certain that the man bearing such portentous news was arrested by the FBI on the evening of 13 August 2009 in front of running TV cameras.

After announcing that he wanted to inform the White House and bring all facts to public attention, Moshe fled through Los Angeles towards the Israeli consulate in a red Volkswagen Beetle. He never arrived: the FBI and a bomb squad with armoured cars wedged his vehicle. Microwave weapons crippled the car’s electronics and Moshe’s mobile phone; the police then fogged him with tear gas and a remote-controlled robot shattered his car window. Moshe was sprayed with several cans of pepper spray, tasered and finally roughly dragged out—all of which can be seen on the Internet portal YouTube (simply type in “Westwood stand-off”).

What happened to Joseph Moshe afterwards is unknown. Some speculate he was put on a plane and flown to Israel. The official reason for the arrest given by the authorities was once again fear of terrorism: Joseph Moshe was reportedly a madman who threatened to carry out a bomb attack on the White House.

There is no official evidence for the accusations that Moshe brought against Baxter. Yet it is not the first time that the US pharmaceutical has come in for criticism—its blood supplies were supposed to have been tainted with the Aids virus in the past, for example, although that too cannot be proven. A completely different state of affairs was Baxter’s blunder in winter 2008/09, which happened at the company’s own biomedical research lab in Orth an der Donau. Here, Austrian subsidiary Baxter AG produces “experimental virus material” including H3N2 flu viruses. Baxter then uses these pathogens in the Czech Republic to manufacture a flu vaccine against the seasonal flu. So far, so good. 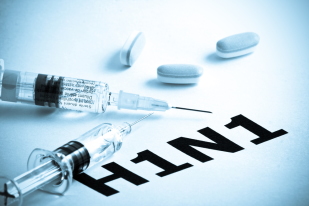 Yet a little over a year ago Baxter just managed to avoid disaster by a hair’s breadth. The corporation supplied a total of 72 kg of experimental flu substances to 16 different labs in Germany, Slovenia and the Czech Republic via Austrian company Avir Green Hills Biotechnology. Fortunately, a Czech lab decided to test the vaccine one more time on a dozen ferrets—all of which died, even though these animals should not even fall ill from seasonal flu viruses in the first place. It thus emerged that the H3N2 flu viruses, which are totally harmless to ferrets, had inexplicably been contaminated with the aggressive and non-declared avian flu virus H5N1. Even worse: these viruses had not been killed off as is usually the case with a vaccine, but were active!

In plain words: if this experiment on the animals had been ignored, tens of thousands of people all over Europe would very possibly have been infected with a highly dangerous disease—because live avian flu viruses would have been injected into people in a normal flu vaccine!

Baxter apologised, admitting a “serious error.” But experts are shocked that such a catastrophic slip-up could have happened in the first place, since the guidelines for a high-security research facility are supposed to prevent precisely this sort of thing.

The four EU states affected were investigating Baxter while the World Health Organisation was “closely monitoring”. After all, it was the WHO that supplied these dangerous bird flu virus strains to Baxter in the first place. Apart from a fine, the pharmaceutical multinational got off lightly. Austria treated the incident not as a breach of the security regulations regarding bioactive substances, but simply as a violation against veterinary requirements—and sent an official vet to inspect the Baxter lab.

This “serious error” could well have unleashed a new type of pandemic. Mixing two genetically related virus strains is called “virus reassortment” in technical-speak. It is very dangerous: if two different viruses come together in the same host cell, new super-viruses could emerge, against which birds, animals and people have not yet formed any antibodies and are thus completely defenceless. In this case, Baxter’s contaminated flu vaccine could have caused vaccinated people to develop a new type of hybrid virus that combines the high contagion risk of the harmless swine flu with the much more deadly aggression of the avian flu virus, which by itself is difficult to transmit. The WHO would then have far more reason to announce a global pandemic!

Who can blame Nation of Islam leader Louis Farrakhan for advising his fellow Afro-Americans not to get vaccinated against swine flu1 under any circumstances? According to this civil rights campaigner, it is actually a tool to reduce populations. On 18 October 2009 during a gathering in Memphis Farrakhan shouted into the crowd: “The Earth can’t take 6.5 billion people. So what are you going to do? Kill as many as you can. We have to develop a science that kills them and makes it look as though they died from some disease.”

In fact, conventional vaccines already offer diverse ways to die—even without adding a “conspiracy” to the mix. Because adjuvants, or in plain terms, additives, are actually a big problem in vaccines. These active agent enhancers and preservatives frequently contain the metals aluminum, and above all mercury, both of which poison the body in different ways. Thus the adjuvant squalene can trigger auto-immune diseases such as Gulf War syndrome, while thimerosal (or thiomersal) contained in all swine flu vaccines in Germany comprises up to 50% pure mercury. It is the most toxic non-radioactive element on earth and can cause cancer even in the smallest amounts. In addition, modern vaccines also contain so-called nanoparticles.2 Nobody really knows precisely what (side) effects these tiny little elements can have on the organism, but what is certain is that nano-sized substances suddenly exhibit completely different characteristics.

A French researcher has warned explicitly about the new swine flu vaccine, which could trigger a long-term “health disaster”.  Find out in the full article what’s making more and more experts so worried. We also tackle the question of whether governments and the world’s top scientists are actually working to release artificial killer viruses on mankind: official documents that have lain secret for many years, as well as statements from various researchers and politics speak volumes. We also take a closer look at the circumstances surrounding the emergence of Aids, particularly with regard to the words of a highly-reputed American scientist in a lecture from 2006, which – significantly – took place behind closed doors. Yet despite all this, these people have reckoned without one crucial thing – that the higher cosmic intelligence, perhaps what we call “God”, still has firm hold of the reins. So there is hope for the world yet – and we also provide some simple rules on how each and every person can take responsibility for their own health. Find the full article in Facts are Facts print edition no.6.

Depopulating the world is the global elite’s most urgent objective: find out more about this highly-charged topic here in our full report: Illuminati: One Billion is enough!

Find out  what goals US foreign policy has against developing countries, and what all this has to do with the call for a supreme global authority: America's “Development Plan” for the World