America's “Development Plan” for the World

International development assistance as a means to promote One-World Government. 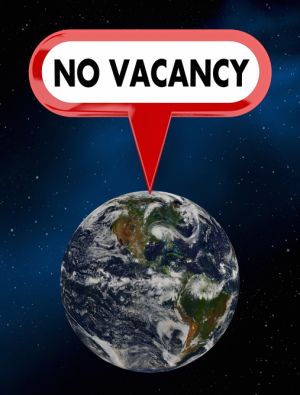 No Vacancy! The global elite sees the growth of the population as one of the most serious challenges.

In July 1969, the American President Nixon held a historic address before Congress. In this first speech on the issue of population, he said: “One of the most serious challenges to human destiny in the last third of this century will be the growth of the population.”

Nixon called for the creation of a high-calibre commission that would deal with the consequences of a possible over-population, and thus the Commission on Population Growth and the American Future was established the following spring. Nixon appointed as chairperson economics magnate John D. Rockefeller III, who had been pushing for the creation of this kind of expert panel since the Eisenhower administration. The sixty recommendations published by the commission in 1972 include a proposal to legalise abortions across the country, paid for by the government. It also suggested providing teenagers in particular with contraceptives—a truly provocative idea for the time!

Although Nixon officially kept quiet, his Secretary of State and former national security advisor Dr. Henry Kissinger gave the population issue the highest priority. The German-born Jew began his political career in 1957 as advisor to the New York Governor Nelson A. Rockefeller, and is still pushing the Rockefeller agenda today. The now 87-year-old Kissinger and 95-year-old David Rockefeller remain influential members of the secretive Bilderberg Group.

Under Kissinger’s aegis, the National Security Council submitted the so-called National Security Study Memorandum 200 to the US President in 1974. Classified until 1989, the document bears the heading: “Implications of Worldwide Population Growth for US Security and Overseas Interests.” In it, Kissinger and his like-minded associates call for a massive reduction of the population in less developed countries: those explicitly mentioned are India, Bangladesh, Pakistan, Nigeria, Mexico, Indonesia, Brazil, the Philippines, Thailand, Egypt, Turkey, Ethiopia and Columbia.

This plan was to be achieved by means of food scarcity, sterilisation programs and war. The independent government aid organisation USAID received additional financial assistance in order to implement this population policy in developing countries. Various headings such as: “Creating Conditions Conducive to Fertility Decline” or “Utilization of Mass Media and Satellite Communications Systems for Family Planning” [meaning abortion and sterilisation] can be found in the NSS Memorandum 200.

The National Security Council also proposed increasing development aid for Third World countries that commit themselves to the implementation of such depopulation programs.

And that’s not all. “The allocation of scarce PL480 (food) resources should take account of what steps a country is taking in population control as well as food production,” the Memorandum 200 goes on to say. “Mandatory programs” were to be put into operation by using food as “an instrument of national power.” Put plainly, Third World countries have to bow to the will of the global elite imposing deliberate famines on their own population if they do not want to be brought to their knees by the same methods.

Natives Are Nothing But a Nuisance

USAID director Ray Ravenott admitted in 1977 that the American Security advisors were not just concerned about global overpopulation, but also specific economic interests. He observed that his authorities’ objective was the sterilisation of a quarter of all women worldwide—a necessary action in order to protect the economic interests of the USA, because growing unemployment in over-populated developing countries would increase the danger of unrest and insurgency. Even back in 1974, the NSS Memorandum 200 had already indicated how important the “smooth flow of needed materials” was for the USA. In 1978, Henry Kissinger bluntly stated in another memorandum: “Depopulation should be the highest priority of the U.S. foreign policy towards the Third World… [because] …the U.S. economy will require large and increasing amounts of minerals from abroad, especially from less-developed countries.”

The then-CIA director George H. W. Bush was one of those tasked with implementing the plan. Nothing new for him—during his time as Texan delegate to the House of Representatives barely ten years previously, Bush Sr. was in fact chairman of the Republican Task Force on Earth Resources and Population. In this capacity, the future US President had in April 1970 already championed a family planning law that would support contraception, abortion and sterilisation.

In 1975, Henry Kissinger as chief of the US State Department created the Office of Population Affairs (OPA), a subordinate governmental body. The actual purpose of this agency was later masked with an innocent-sounding name: today it is called the Bureau of Oceans and International Environmental and Scientific Affairs (OES). “Accordingly, the OES has consistently blocked industrialization policies in the Third World, denying developing nations access to nuclear energy technology—the policies that would enable countries to sustain a growing population”, wrote Lonnie Wolfe in a Special Report on “The Haig-Kissinger depopulation policy” that was published in March 1981. Alexander Haig, by the way, was the NATO commander-in-chief in Europe and Secretary of State under Ronald Reagan. According to State Department sources, Alexander Haig is a “firm believer” in population control.

Fast-forward to recent months, to the abortive climate change summit in Copenhagen in December 2009: many observers were struck by the fact that industrial countries persistently refuse to allow even a very limited technology transfer to developing and emerging countries. Economic fears certainly play a part in this attitude, but perhaps there are much more important demographic motives behind it, too.

End of extract „America's “Development Plan” for the World“

Or: “Kill as many people in developing countries as possible,” to paraphrase the maxim of the global elite. This claim has been backed up by genuine quotations from politicians, state authorities and representatives from the world high finance. Find out in our Facts are Facts print edition no.6 what all this has to do with the call for a supreme global authority – a world government.

Depopulating the world is the global elite’s most urgent objective: find out more about this highly-charged topic here in our full report: Illuminati: One Billion is enough!

Are ordinary vaccinations secretly being misused to slash the world’s population? Can it be that man-made killer viruses are to be unleashed with the sole aim of triggering global pandemics for this very reason? Find out more here: Vaccinations: A Deadly Injection?