Illuminati: One Billion is enough!

Nothing troubles the secret elite powers quite so much as the world’s growing population. Their goal is to reduce this number to a billion—and by any means possible: wars, famine, epidemics, disease and vaccines that make women infertile. 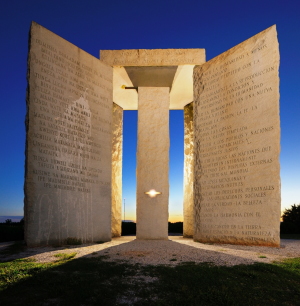 The Georgia Guidestones: a mysterious monument that was erected by an anonymous group of wealthy people encourages a drastic reduction in the world’s population.

On a hilltop in Elbert County in the US state of Georgia stands a huge granite monument built in March 1980. The identity of the architect is still unknown, for the well-dressed and eloquent man who entered the offices of the Elberton Granite Fishing Company in June the year before and announced his plan to erect a monument with a message to humanity gave a false name. R. C. Christian remains a phantom, as do the men who financed the construction of this “American Stonehenge”. Yet it is said that the monument is still an important ceremonial site for the occult secret society that aspires to world domination.

The four granite plaques surrounding the central columns are engraved with messages in eight languages, and call mankind to unity and respectful communion with Nature, in harmony with the Infinite. Critics, however, see in it the blueprint for a planned world dictatorship, which, for many people, could mean death. Hewn in stone, just as the Ten Commandments once were, these ten modern “guides” call for moderation in different aspects of life. The last point on the stone plaques admonishes: “Be not a cancer on the earth—Leave room for nature”! A request that good-willed and well-meaning people could hardly oppose. Yet what about the first and most important message on the Georgia Guidestones, which simply reads: Maintain humanity under 500,000,000 in perpetual balance with nature? Following this instruction would mean killing twelve out of thirteen people currently living on the planet.

Mankind—No More Than a Pox and a Commodity

After the fall of Communism, Mikhail Gorbatchev, the first and last President of the Soviet Union, dedicated himself to environmental protection and became the co-founder of Green Cross International. He also made a considerable contribution in formulating the so-called Earth Charter. According to Wikipedia, “The Earth Charter is an international declaration of fundamental values and principles considered useful by its supporters for building a just, sustainable, and peaceful global society in the 21st century. Created by a global consultation process, and endorsed by organisations representing millions of people,” the Charter’s “ethical vision proposes that environmental protection, human rights, equitable human development, and peace are interdependent and indivisible.” It is supposed to be ratified as a binding contract under supranational law by the international community.

Its guidelines are outlined in 16 articles, the seventh of which reads: “Adopt patterns of production, consumption, and reproduction [highlighted by editorial] that safeguard Earth’s regenerative capacities, human rights, and community well-being.”

Gorbatchev himself does not mince matters: “We must speak more clearly about sexuality, contraception, about abortion, about values that control population, because the ecological crisis, in short, is the population crisis. Cut the population by 90 percent and there aren’t enough people left to do a great deal of ecological damage.”

His vision of a sustainable world population of a good half a billion people matches the first of the Georgia Guidestones’ commandments exactly—strikingly so. Also following these lines is the President’s Council on Sustainable Development, an expert panel that advised US President Bill Clinton between 1993 and 1999. In answer to the earth summit in Rio de Janeiro in 1992, it concluded in 1996 that the world population should not exceed 500 million.

The multi-billionaire and former media czar Ted Turner—more on him later—expressed even more severe views that same year. In an interview given in 1996 to the magazine of the American conservation organisation The Audubon Society, Turner explained: “A total population of 250-300 million people, a 95 percent decline from present levels, would be ideal.”

Dave Foreman from the Sierra Club (another US conservation organization) and co-founder of Earth First! once confessed: “I see no solution to our ruination of Earth except for a drastic reduction of the human population”. Another time he said: “We humans have become a disease—the human pox!” The militant whale protector Paul Watson (Sea Shepherd Conservation Society) is also one of those who demand a world population of under a billion people, because “We are killing planet Earth”.

Yet it’s not only the radical environmentalists who fear that the planet will soon be bursting at the seams, but also the intellectual elite. The Club of Rome, for example, has been warning against overpopulation for decades. The First Global Revolution, published in 1991 by this influential think-tank, contains the statement: “In searching for a new enemy to unite us, we came up with the idea that pollution, the threat of global warming, water shortages, famine and the like would fit the bill.1 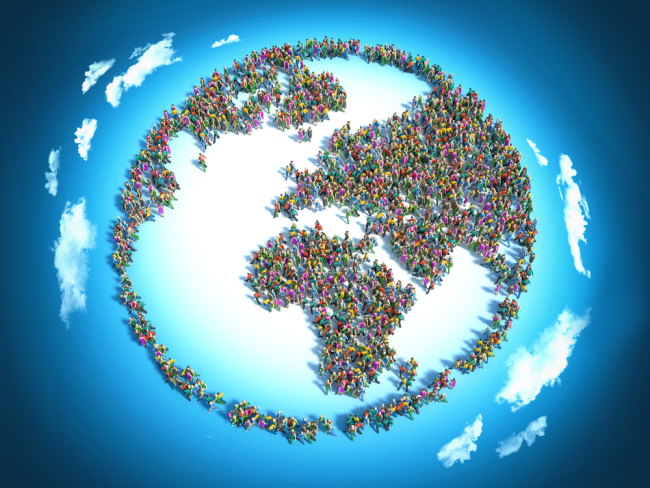 Too many people: the global elite fear planetary collapse.

“But in designating them as the enemy, we fall into the trap of mistaking symptoms for causes. All these dangers are caused by human intervention (…) The real enemy, then, is humanity itself.”

Jacques Cousteau, the internationally respected oceanographer, explained to the UNESCO Courier in an interview in November 1991: “The damage people cause to the planet is a function of demographics—it is equal to the degree of development. One American burdens the earth much more than twenty Bangladeshes. The damage is directly linked to consumption. Our society is turning toward more and needless consumption. It is a vicious circle that I compare to cancer.” He then added: “This is a terrible thing to say. In order to stabilize world population, we must eliminate 350,000 people per day. It is a horrible thing to say, but it’s just as bad not to say it.”

Paul Ehrlich, a professor at the renowned Stanford University, wrote in his book The Population Bomb: “A cancer is an uncontrolled multiplication of cells; the population explosion is an uncontrolled multiplication of people. (…) We must shift our efforts from treatment of the symptoms to the cutting out of the cancer. The operation will demand many apparently brutal and heartless decisions.”

These men are neither fantasists nor ignorant; they are pragmatists like former US Secretary of State Henry Kissinger, still a leading member of the Bilderberg Group and one of the eminences grise in American politics, who simply said: “The world population must be reduced by 50 percent.”

Convenient, then, that the UN Biodiversity Assessment on Sustainable Human Population should state, “All ecosystem management activities should consider human beings as biological resources”. In other words: human right to life is no longer inviolable, because one should cultivate mankind just like any other commodity. The document goes on to say that, “A reasonable estimate for an industrialized world society at the present North American standard of living would be one billion people. This must be implemented within 30 to 50 years.”

When this was presented to the US Senate on 9 September 1994, it caused such a furore that it had to be withdrawn. Yet the ideas contained within it managed to escape the shredder.

An article appearing on 24 May 2009 in the British Sunday Times is also interesting in this respect. It reported that some of the richest people in America had secretly gathered together to discuss the issue of global overpopulation and what they could do about it. “The philanthropists who attended the summit convened on the initiative of Bill Gates, the Microsoft co-founder,” the newspaper informed its readers. “Described as the Good Club by one insider it included David Rockefeller Jr., the patriarch of America’s wealthiest dynasty [current total assets unknown], Warren Buffett [37 billion dollars] and George Soros [13 billion dollars], the financiers, Michael Bloomberg the mayor of New York [16 billion dollars], and the media moguls Ted Turner [2.3 billion dollars] and Oprah Winfrey [2.3 billion dollars].”

Together with Bill Gates, these people have donated over 45 billion dollars to charity since 1996. The informal meeting took place on 5 May 2009 in New York and was evidently so secret that some billionaires told their personal employees that they were taking part in “security briefings”. According to Stacy Palmer, editor of the Chronicle of Philanthropy, there had never been such a top-class and simultaneously mysterious meeting. “We only learnt about it afterwards, by accident. Normally these people are happy to talk about good causes, but this is different—maybe because they don’t want to be seen as a global cabal.”

Apparently they mainly discussed projects in the Third World. “Taking their cue from Gates they agreed that overpopulation was a priority,” commented the Sunday Times article. It goes on to quote another participant, according to whom the group believed that the problem of population growth had to be tackled as a “potentially disastrous environmental, social and industrial threat”. “This is something so nightmarish that everyone in this group agreed it needs big-brain answers,” explained the guest, who wished to remain anonymous. “They need to be independent of government agencies, which are unable to head off the disaster we all see looming.”

Why so independent, covert, faceless? As the anonymous guest revealed, “They wanted to speak rich to rich without worrying anything they said would end up in the newspapers, painting them as an alternative world government.”

End of extract „Illuminati: One Billion is enough!“

Over a total of fifteen pages, we reveal the methods by which the global elite is striving to decimate the population – even as you read. We shed light on the origin of this inhuman – in the truest sense of the word – attitude, which began more than a hundred years ago with the so-called “racial hygiene” approach, or Eugenics, in Great Britain. Learn what role the Rockefellers have played, and how this powerful family has supported the conspiracy against public health, which first became public forty years ago. We uncover what is actually behind the innocent-sounding term “Planned Parenthood” and show how different vaccination campaigns organised by the World Health Organisation (WHO) aim to reduce people’s fertility. It has long been substantiated by Science that these are not simply “conspiracy theories”; researchers have been working for years on “contraceptive vaccines”. Read our comprehensive report to find out in which ordinary vaccines these substances have already been found, and whether the new vaccination against cervical cancer (currently so highly advocated for young women) is among them. Find out in our printed issue Facts are Facts print edition no.6.

Find out here what goals US foreign policy has against developing countries, and what all this has to do with the call for a supreme global authority: America's “Development Plan” for the World

Are ordinary vaccinations secretly being misused to slash the world’s population? Can it be that man-made killer viruses are to be unleashed with the sole aim of triggering global pandemics for this very reason? Learn more here: Vaccinations: A Deadly Injection?