The Power of Sound

How music caused the rise and fall of great cultures in antiquity—from ancient India to the Roman Empire.

If there were ever anything like a magic potion that could be poured into man to bring him to a higher plane, then this magic potion would be made of sounds. Sound can make glass shatter, drive men insane and bring Heaven closer to Earth. In this age, where we are awash in music, where music has become amusement available at the touch of a button, we have forgotten the creative force that is inherent in sound—that entire cultures were destroyed by the wrong usage of quarter- and third-tones1 and that our present culture threatens to choke on the materiality of the half-tone. 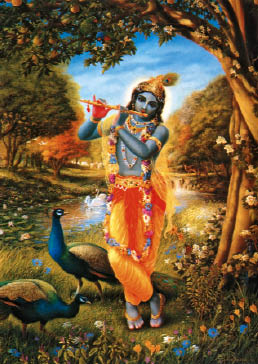 Krishna plays the sound vibration Om on his flute. Whoever hears this sound will acquire complete Vedic knowledge. The music of ancient India was the basis of this culture’s high spiritual knowledge.

In the first half of the 20th century, the veils to the world of inspiration were lifted and one of the master beings working for the development of mankind through music communicated through his disciple, Nelsa Chaplin, what momentum great, truly inspired composers such as Bach, Beethoven, Wagner, or Straus should bring to Earth and how music influences great cultures.2 The name of this Mahatma is Koot Hoomi Lal Singh, or—as we’re used to seeing in the West—Master Kuthumi.

The Greek philosopher Plato wrote that a musical education is a more influential instrument than any other, since rhythm and harmony find their way to the inner places of the soul, take them powerfully in control, lend them grace—and cause the soul of he who is properly educated to become lovely. The importance Plato ascribed to the effects of music can be seen in the following statement from his work The Republic: “For the introduction of a new kind of music must be shunned as imperilling the whole state; since styles of music are never disturbed without affecting the most important political institutions.”

Aristotle also agreed: “… Emotions of any kind are produced by melody and rhythm; therefore by music a man becomes accustomed to feeling the right emotions; music has thus the power to form character, and various kinds of music based on the various modes may be distinguished by their effects on character—one, for example, working in the direction of melancholy, another of effeminacy, one encouraging abandonment, another self-control, another enthusiasm, and so on through the series.” Different instruments also have different effects: drums and brass instruments, for example, primarily affect the physical body, reed instruments (e.g. flute, clarinet, etc.) the feelings, string instruments (e.g. violins, guitars, etc.) the mental-emotional, and harp and organ the spiritual-emotional level in man. So music influences our feelings and—as, for example, in the case of Bach—also our thoughts. And what every person has already individually experienced is also true for the masses: music can either lead peoples and civilizations to new heights or drag them down into the vortex of collapse. Tones create vibrational patterns that move through the ether, which then group themselves and together affect receptive soul-bodies—and this since the beginning of time. It’s true that music used to be a more exclusive subject than in today’s high-tech world—that a Handel or Chopin didn’t find his way to the masses as quickly as Guns’n’Roses or the Rolling Stones do today. But those circles responsible for the fates of entire peoples—kings, princes, popes—certainly did have access to the compositions of the time through their court musicians, and folk music certainly influenced the souls of the “common” people. And wherever these people didn’t travel very much—in China, for example—this inflexibility manifested itself as an attachment to old traditions. But where and whenever the fanfare of a new kind of music resounded, it was followed by an improvement in politics and ethics, and wherever a music began to decline, it carried its culture and civilization with it into the chasm. So where are we today?

Ancient India: Transfiguration Through the Quarter-Tone

When the Manu (the leader of mankind) formed the so-called fifth root race (to which we European-descended belong) in India to counteract the black magic that pulled the Atlanteans of the fourth root race into ruin, he forbade the playing of the old Atlantean music, the effects of which had proven to be devastating, and he introduced a new scale and the science of the mantras so that the new sub-races could learn to become receptive to higher vibrations.

Indian priests passed these mantras on over the following centuries; Indian music was exclusively associated with religious traditions and was only intoned at certain times of day. Music in ancient India was not developed as an art form in itself, but as a means to spiritual perfection and meditative contemplation. Of course, this kind of music influenced the creation of the sublime ancient Indian writings.

The powerful spirituality called forth by the quarter-tone was so subtle that it exerted a sublimating power on the mind and helped the Indians to acquire sublime, spiritual knowledge.

The people certainly tried to give expression to their feelings in song, but the means available were extremely limited. Ultimately, the sublime spirituality of Indian music led to the Indian people neglecting certain qualities that are needed for daily life—the Indians as a race became one-sided, passive, languorous, pensive, and too much occupied with spiritual things. So out of spiritual transfiguration there grew in the Indian people a kind of incompetency for life—a fate they might have been spared if they had allowed and encouraged new forms of musical expression.

End of extract „The Power of Sound“

It was the third-tone that predominated in Ancient Egypt, and was responsible for the rise and fall of this particular civilisation. In Greece, however, homage was paid to the half-tone of the physique. Find plenty of interesting connections in the full article in our Facts are Facts print edition no.7.

As early as the 1950s, scientists realised that, “… in next to no time you can reduce [philosophers] to a state of almost mindless subhumanity” (Aldous Huxley). Physicians have long explored what really happens in the brain and body at rock concerts – we provide all the information in our printed issue’s full article. A famous neurologist even wrote quite recently that certain types of music can trigger heart attacks. We also explain how the body is weakened by a beat or drum rhythm, particularly one that is frequently used in pop and rock music. Psychologists describe how hard rock and heavy metal (to name but two types of extreme music) can influence a person’s psyche and thus have a direct effect on our society – including greater suicide rates and increasing numbers of sex crimes. Read more here: Music and Psyche: Crippling Rhythms and Murderous Mice

Don’t miss our 17-page report on the (secret) history of rock music – from its rock ‘n’ roll beginnings to current stars such as Lady Gaga or Jay Z, who are quite blatantly spreading the dark goals of the Illuminati: Rock Music Report: In the Service of the Illuminati

The power of music was recognised as far back as the ancient civilisations; read our printed issue No. 7. to find out how it was involved in the rise and fall of early cultures. And don’t forget to read the article if you’d also like to know what great philosophers such as Confucius had to say about music and its influence on society, or how music can boost our intelligence and refine our soul: How Music Refines the Character

Water and music have a much closer bond than we could ever have imagined. Read here why jellyfish are musical, and what singing whales are doing for Planet Earth: Music and Water: Chiming Jellyfish and Singing Whales