Water and music have a much closer bond than previously thought. Read here about musical jellyfish, and what singing whales are doing for the benefit of Earth. 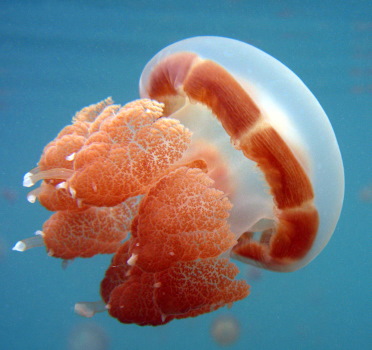 Everything has a ripple effect. No one would argue against the fact that our physical actions leave traces on Earth, yet it is an unknown truth that people’s thoughts and feelings do the same—and often to a much greater degree. The way we think, feel and even speak is mirrored in the realms around us, whether mineral, vegetable or animal. Not only that, but the emotions we hold in our hearts, our distinguishing features, also find an anchor in the physical. These human characteristics are then embodied in animals and plants.

Thus the stubborn donkey, for example, stands for human tenacity; the “greedy” crocodile embodies hunger and gluttony; the camel endurance and patience, the kangaroo the drive to move forward; the elk natural and harmonious sexuality; the polar bear an individual, solitary lifestyle enduring even in the most adverse conditions; the woodpecker represents solid craftsmanship; the horse intelligence, the lion authority; the porpoise merry childishness and playfulness; the hedgehog the ability to overcome anxiety; the rabbit speed and mobility; the swan the higher soul of man; the reindeer spiritual relations; the snake the “dark companion” of man that doesn’t necessarily tell the truth; the chameleon stands for adaptability and the giraffe for “gentleness”. And who would claim such a thing? The animals themselves!

We have already reported more than once about the findings of northern German surveyor and hydrographer Verena Staël von Holstein through her contact with the realm of nature. Even as a child she was able to see nature spirits, and for years has spent much of her time conversing with the most varied nature and elemental spirits. Her interviewer is usually Wolfgang Weirauch from the Flensburger Hefte publishing company. In this article we provide extracts from her three volumes Gespräche mit Tieren (Conversations with Animals). Since this issue covers the subject of music, we are keen to take a closer look at the beings that embody musical tones in the animal kingdom, namely the jellyfish of the sea, as well as those beings that enchant researchers with their mysterious song: humpback whales.

Verena Staël von Holstein’s interlocuter is the merman of her region. A merman is a protective spirit and the spiritual expression of water in the river valley. “Our” particular water spirit is called Etschewit.

As he relates in the third volume of Conversations with Animals, “Jellyfish are essentially chiming bells that swim in the sea. Large jellyfish consist of entire melodies; small jellyfish individual notes. (…) Sound has become denser in them. Since sound finds its most beautiful and divine form in bells—why else would you find bells in a church!—jellyfish have preserved this distinctive flared shape; they are essentially the church bells of Earth.”

According to Etschewit, jellyfish are spiritually significant because they enshrine cosmic melodies in the physical. Whales sing the ancient cosmic melodies, while jellyfish preserve them on Earth. Poisonous jellyfish embody aggressive, disharmonic music like the sounds of modern techno; even in ancient times, music of a similarly fierce nature was drummed at ceremonies held by “savages”. Just as varied as human music styles are the jellyfish themselves, of which at least 2,500 different species are to be found in the world’s seas. The increasing numbers of jellyfish appearing for example in the Baltic Sea is, according to Etschewit, a direct result of the ever-present music pumped out of our radios, department stores, etc. that makes up the soundtrack to our everyday life; this active music-making is chiefly what generates the existence of these creatures. Evidently, then, jellyfish epidemics are chiefly the result of mass-produced music.

Jellyfish have existed since Earth began. They are ancient beings whose presence here is linked to Earth’s evolution. Once upon a time, our moon was in the position of our Earth; her aged ancestor to whom the previous planetary chains belonged. Like everything in Creation, planets and solar systems come into being and die away just as quickly, and it was no different with our moon. Once a blooming celestial body, the moon was where the earthly teachers of wisdom successfully completed their series of embodiments until they had reached their ascension. This is also discussed in the writings of Helena P. Blavatsky, who calls the teachers of humanity Rishis, who come from the moon. The “ancient moon” referred to below does not relate to the skeleton we see in our night sky, but the once bright planet that was the moon before it “died”, before it passed on its remaining energies to its successor, Earth, and then partially petrified. Etschewit says: “Wisdom was developed on the ancient moon, wisdom that resounds out of the entire design of your Earth. Everything around you is made from infinite wisdom. Beings on the ancient moon who had achieved a higher consciousness worked hard to enable wisdom to exist at all. Beauty is simply the other side of the same coin.

“In order to maintain this beauty and wisdom, these ancient teachers, these moon beings, gave their sounds to your oceans and mountain streams. But the ocean is much bigger than the stream, which is why they specifically targeted the oceans: these are the most similar to their world. These teachers are even able to influence the most undisturbed regions deep down in the oceans, even if humans increasingly begin to disturb those regions as well. Yet the oceans are vast and comprise about seventy per cent of your Earth’s surface.

This constantly renews the wisdom of the moon, so the Earth remains wise. This is why the jellyfish chime in the world’s seas. This is putting it in black and white terms, since this wisdom has its effect in many other places; yet the easiest way to demonstrate this is in jellyfish, where sound is strikingly evident.”

The interviewer Wolfgang Weirauch asks the merman Etschewit what the “ancient teachers” have wanted to communicate to the world seas over the last few years.

Etschewit’s answer: “At the moment, the moon teachers are trying to tell people that they must work on their own human qualities with more awareness if they want to reach their goal on Earth. They tell them that thought is not everything; that the problems of your Earth cannot be solved purely by knowledge and logic, but that all three ways—Belief, Love, Hope (i.e. Thought, Feeling, Will)—must come into harmony. Nowadays, mankind hugely overestimate thought. And there are only very few people who can say with perfect awareness that they place Perception over Thinking, and can see that Perception has much to do with Feeling. This is what the ancient teachers have recently been trying to tell the Earth and its people through the jellyfish. They are very patient because they think in much larger time frames—you humans hardly look beyond the end of your nose. For you must survive—and only some are fortunate enough to be able to look at their whole life like that. Only very few are lucky enough to be able to start looking beyond their own life, since most people are often busy just surviving. Of course, there is an even bigger group of people who are not just absorbed in surviving; who would now be able to start working towards these higher goals, but they are much too sluggish to do so.”

Coming back to the subject of wisdom, Etschewit specifies: “Originally, wisdom descended from on high. Just as there are different forms of thinking—logical thinking, intuitive thinking, analytical thinking, thinking from the heart, emotional thinking, etc.—there are also varying forms of wisdom. There is what you could call logical wisdom; there is even something you could describe as heart knowledge, soul-making knowledge, musical wisdom, animal wisdom, plant wisdom. All these different forms have come through jellyfish. If looked at from an evolutionary perspective, jellyfish have been drifting in the oceans for a very long time. These are not young beings; they came about almost at the same time as the Earth emerged. At first they were invisible, but they soon took on a physical form since they were gateways for the sounds of the ancient teachers.”

According to Etschewit, jellyfish’s different colours and shapes are linked to the mood expressing the sounds which represent a jellyfish. In actual fact, jellyfish should not be poisonous: any poisonousness is a result of the destructive nature of the sounds they embody, as Etschewit explains in detail: “There are sounds that diminish awareness, that lead to ecstasy, and there are also sounds that make people violent, that cause man to be at war with each other; marching music, for example. Some people become euphoric, inflamed by sounds; there are inflammatory sounds and similar. All this causes the person to abandon his human level and go back to the level of an animal. In a case like this, self-awareness drops to an astral level. At that moment, the music that arises at this point becomes an astral body that is completely out of place. This astral level is so wrong that it can create the most poisonous of all poisonous results—because it has been created from twisted, distorted forces of self-consciousness. If this astral level locks itself into the animal being of the jellyfish, these extreme poisons will emerge. It should also be mentioned, however, that these jellyfish toxins have huge healing potential, although these are difficult to obtain and not easily available on the market.”

In our full article, a water spirit explains how recent troublesome jellyfish infestations off some of the world’s coasts have partly been caused by modern music. He also reveals that never-before-seen giant jellyfish representing “symphonies”, as well as “operas” and “church masses” are pulsing through the ocean depths. Plus, we also discuss in detail the mysterious song of the humpback whales, which sing the ancient songs of the lunar teachers - something that has great significance for the Earth’s balance. A fascinating, unprecedented insight into the spiritual life of these huge sea mammals, which have “consumed the entire wisdom of Earth” as a great nature being puts it. Find the full article in our Facts are Facts print edition no.7.

Facts are Facts issue 7 is all about music – from the dangerous and evil excrescence of today to the uplifting and powerful sounds that helped entire civilisations flourish. Find out about the varied music-related topics here:

If you’d like to read about what penguins want to tell mankind: Penguins: Discovering the Man Within the Bird