Sleep: Journeys through the Night

What do we actually do when our body is lying sleeping in bed? Why do we sometimes fall into dreamless deep sleep and other times jerk awake bathed in a cold sweat? Find out here why all sleep is not equal and how you can use the night to further your development! 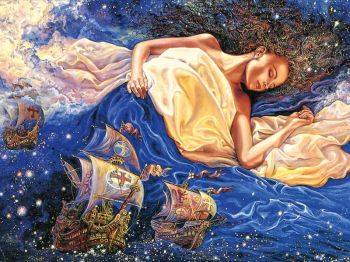 Maybe you think you’ve got everything under control. Maybe you think you know what’s what. Are not easily manipulated. And then you go to bed. You spend seven or eight hours in total unconsciousness. Sometimes you feel refreshed in the morn­­­ing, sometimes smashed, sometimes full of new ideas and other times full of de­­­­spair. Which shows that you don’t have the third of your life that you spend asleep under control at all! Prentice Mulford, an American philosopher who lived in the 19th Century, even went so far as to say that we live “two separate existences that alternately erase each other. Over the course of twenty-four hours, we are two separate beings that know almost nothing about each other. We live daily in two worlds, near each other in space, but separated by a chasm of unconsciousness.”

What do you do at night and what worries you—and when you do something, where? In what regions of space do you loll about? No idea, you say. That’s pretty normal, but don’t you think it should matter? Because while we certainly need sleep for the continued existence of our physical bodies, our souls needs it just as much.

Let’s start with what we can touch: the diving suit that we’re stuck in all day—also called our body. We inflict so much nonsense on it every day—from dumb and destructive thoughts and feelings of stress and hectic to burgers and pizza—that it can only survive when its inhabitant is quieted for a few hours every day. Then the body, or rather the being that controls it (we call it the body elemental) can cleanse our physical vehicle for the person to survive another earthly day in the best possible health. Research has also discovered that the metabolism and immune systems are kicked up during the night—and what happens when that doesn’t oc­­cur: “If someone sleeps poorly, a whole lot of physiological processes are disturbed. That is why people with chronic sleep disorders tend to be over-weight and have mood swings; they are more susceptible to infection and have a higher risk of developing chronic illnesses,” the Spiegel news magazine reported in its 44/2011 edition. Or as the German sleep researcher Jürgen Zulley summarises: “Too little sleep makes people fat, dumb, and sick.” The latest research shows that in order to continue to function well, the brain must protect itself from the chaos of human thought for a few hours each night. “Memories, thoughts, and emotions are ordered during sleep so that the consciousness is ­prepared for the next waking phase,” the Spiegel reports. According to the neuroscientist Giulio Tononi from the University of Wisconsin in Madison, the “synaptic connections are reduced again to a reason­able amount.” Meaning that whatever is not necessary, whatever was created from human hyper-stimulation, is cleared out.

Sleep is for a person what winding is for a watch.

That’s what the research tells us. In the Flensburger Hefte1 , Kordon tells us what happens to the body during the night. Kordon is a being who cares for many body elementals, which is why he is called a “body elemental shepherd”. Which means that he looks after those beings that keep our physical bodies functioning, counsels them, and comforts them when their dwel­­lers’ behaviour sometimes threatens to make them fall into despair. According to Kordon, in the night “my body elementals are able to work undisturbed under the direction of superior hierarchies but without the destructive influence of the astral body [Ed: a person’s feeling nature] and the Ego. That is why you are able to regenerate so well during the night, be­­cause you don’t get in the way with your astral self and your lower self.” When asked what kinds of beings might participate, he answered: “They are members of the first hierarchy, so very exalted angelic beings. They enter in at night to inhibit the decay of the physical body and the etheric powers, to harmonise the power balance and to regenerate the ravages of the day. With their willpower, they penetrate matter even to deep within the physical atom. Two different willpowers are always needed; otherwise there can be no matter. Whenever two willpowers from the exalted hierarchies intercept, matter is created. These exalted hierarchies do this for mankind, blessing them with a new, healthy impulse under the guidance of the Healing Spi­rit—and my boys, the body elementals, do the cleaning-up. We are the happy servants of these exalted hierarchies!”

Kordon says that the ego leaves through the feet at night and slips back in through the head in the morning. He adds that an especial cleansing of the astral body (the emotional body) takes place around midnight, which is the reason that “sleep ar­ound midnight is so much more resto­rative for you humans than at any other time.” During the deep sleep phase a kind of eversion of the “astral body and self in connection with the physical body and the etheric body” takes place. This generates a kind of deep recuperation.

Pharmaceutical sleeping pills may allow you to slip into unconsciousness, but they inhibit these deep sleep phases. Admittedly, they work on the neural pathways and the synapses—i.e. on communication within the nervous system—by interrupting certain processes of the neural transmission so that the consciousness has an opportunity to be still. But what re­­­sults is not real sleep—and in most ­cas­es, one’s consciousness the next day is fuzzy and not as functional and clear as it should be.

So the “elevated hierarchies”, as Kordon calls them, look after the regeneration of the sleeping, prostrate body: “These elevated hierarchies are especially important for people who sleep for only short periods of time. It is also important that the physis (Ed: growth plate) is adjusted at the right moment. These elevated hierarchies direct aging—or, in children, growth. They initiate the etheric forces in humans for these processes. You humans aren’t yet so advanced that you can regulate that with your consciousness. Even grey hair is an effect of the superior hierarchies. When a person develops grey hair, their external is being made to match their internal.” When asked what exactly we are to understand by that, Kordon answers: “Grey or white hair is a sign that a person has done so much work in the head area that the first signs of the white vestment can be seen. They have developed wisdom.”

Sleep is a Short Death; ­ Death a Long Sleep.

So much for the physical aspects of sleep. But where does the I-consciousness repair to during the still of the night? Science is left groping in the dark here. But the enlightened ones of spiritual science know it all the more. In the second worst case, the true person—the spiritual being that thinks, feels, speaks, acts, and that is only the occupier of the physical body—stays there where the unknowing think it is: in bed. Very materially oriented people who don’t concern themselves at all with the spiritual aspects of their life often remain bound to their body during the night and spend the whole night circling around it. This is a leaden sleep that weighs down, pervaded with oppressing dreams. That is how the Bulgarian sage Omraam Michael Aivanov describes it in the book Looking into the Invisible2 2. “Yes, there are different kinds of sleep,” he explains. “If most people knew which re­gions of the psychic world they visit in their sleep, they would be appalled. They plodge around in the swamp of their bad habits and base desires.”

In the night, when a person sinks into the sweet unconscious of sleep, his spiritual body separates from his physical. He remains connected with the fleshly body through a ray of energy—called the silver cord. This silver cord ensures that you can return to your body within the blink of an eye, even from the farthest corners of the universe. The intactness of this subtle bond also guarantees that his sleep—also called the ‘little death’—does not unexpectedly become the large, final sleep. That ‘sleep’ only comes when the silver cord is severed and the physical body then ceases its functions, while the true Self, the person’s spiritual body, returns through the tunnel of light to the higher (or sometimes lower) realms until its start in the next life.

As already mentioned, the majority of people, those who have dedicated themselves entirely to the mundane and who are blind and deaf to the higher vibrations, remained “chained alongside their bodies as if paralysed”. It’s a very different story, however, for the person who is inwardly striving ‘heavenward’ even in daily life: “If your soul is able to leave your body during sleep, it is not passive, but travels around, observes eternity, communicates with the heavenly spirits, and is strengthened with insights into love, wisdom, and truth. When it returns, it brings all of these revelations with it as memories and attempts to pass these on to the brain,” says Aivanov. “These memories—these are dreams. That is why you should always try to remember your dreams immediately after you awaken since the most meaningful images still float in our brains at that moment. Sometimes the dreams reappear during the day as memories; but it’s better to remember them right after waking.”

End of extract „Sleep: Journeys through the Night“

This six-page article reveals the fascinating world of the subtle reality that we all know, but are usually unable to recall during our waking hours. However, there do exist methods that help work around this forgetfulness. And it is just as important to prepare for sleep in the right manner, so that you do indeed reach the higher spheres, and not get stuck in the lower mires of the astral plane. If this happens, unpleasant things can be done to us during the ‘wee small hours’. We all know the feeling. So find out what to do when these spirits start causing trouble. Together with our simple prescriptions for a good night’s sleep, this article will give you everything you need to know to make the best use of the night. The full article is available in our Facts are Facts print edition no.12.

Find out here how ‘ghost buster’ Anton Styger frees homes, buildings, places, and people from malicious spirits, ghosts, and other dark beings: Anton Styger: The Man Who Drives the Dragon From the Door