In the year 553 A.D., 165 Church officials condemned reincarnation. Prior to that time, it had been a fundamental Christian teaching: following the trail of a conspiracy that changed the world.

Reincarnation is a fact. That it is no longer a part of today’s Christian beliefs is due to one power-hungry woman who had all references to reincarnation in the early Bible removed. A seemingly small act with historical consequences: how different would the history of the last two millennia have been if mankind had known that they themselves would reap the fruit of their (mis)deeds in a future earthly life—that they would have to sleep in the beds they had made?! 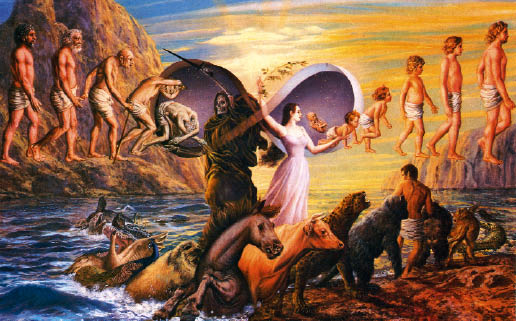 The law of Karma and reincarnation: In an endless cycle, we return to earth until we have learned to control our energies.

At the beginning of the Christian era, reincarnation was one of the pillars of belief. Without it (as later happened), Christianity would lose all logic. How could a benevolent, loving God give one person a silver spoon and leave the next to starve in their ostensibly only earthly life? Early Church elders and theologians, like Origenes, Basilides and St Gregory, taught reincarnation of the soul as a matter of course—it was written in the Bible, after all. Nowadays, most Christians suspect blasphemy if someone references reincarnation.

But let’s return to the 6th century after Christ, where a diabolical conspiracy was hatched in the court of the Byzantine emperor, Justinian, which would hold mankind prisoner in a false understanding of the reality of life and death for 1,400 years. In the generations before that, reincarnation was still an uncontested fact in the Christian church. Instead, whether Jesus had been more man or more God was heavily discussed. Nestorius, Abbot of Antioch, believed that Mary should not be called “the Mother of God”, since she had only given birth to the ‘human’ Jesus. But a Council declared Nestorius a heretic, sent him into the desert, and determined that Jesus was simultaneously human and divine. One of Nestorius’ bitterest opponents was Eutyches, who, on the other hand, believed that Jesus was only divine, as his human nature was completely subsumed in the divine. Today we call this teaching monophysitism (that is, the teaching that Christ’s two natures are joined into a new single human-divine nature). In 451, the Fourth Ecumenical Council (also known as the Council of Chalcedon) condemned monophysitism as heresy and persecuted its advocates. One of the most zealous persecutors was the later Emperor Justinian.

The Council of 451 Emphasises the Law of Reincarnation

As already mentioned, during these religious controversies, reincarnation was never once a topic of discussion. It was held to be a fundamental dogma, which was even reinforced by the Council of 451. Who could have imagined then that Christian theology would so essentially change with the ascension of Justinian to the throne of the Eastern Roman Empire in 527 and what profound repercussions the following centuries would suffer as a result?

The real actor in the shadows was a woman: Theodora, Emperor Justinian’s wife. She had made a sharp social ascent—and this daughter of a bear tamer from the Constantinople circus had used a woman’s oldest weapon to make her climb. Earlier, she had been a young and beautiful prostitute whose services were happily sought by the aristocracy. Hacebolus, the young governor of Pentapolis, fell for her charms and took Theodora with him to North Africa. But she abused the governor’s trust and, at the people’s cost, amassed great riches. When, in her greed, she overstepped the mark and Hacebolus was overwhelmed with complaints from the people, he threw Theodora out of his palace and confiscated all her goods. With only the clothes on her back, she fought her way through to Alexandria. At the gates to the city, she was taken in by a hermit named Eutyches. It was the same Eutyches who had originated monophysitism and was now living out his exile there. Later, Theodora would remember this fallen monk and use him to carry out her dark plans.

Back in Constantinople, she purposefully slept her way up the ladder of society, becoming one of Justinian’s concubines, then his favourite concubine, and, finally, in 523, his wife. Four years later, she and her husband assumed the highest position of power in the secular world: the imperial crown.

Empress Theodora Seeks Her Own Apotheosis

Theodora succeeded—well, almost. Her burning ambition pushed her ever further. There was one final step to be climbed: her own deification. Only then would she be equal with the Caesars of old. It wasn’t really that long before that the Roman Emperors were automatically deified and received a place of worship in the temple halls. Christianity had brought an end to this custom. And it was precisely on this point that the biblically recognised fact of reincarnation provided a stumbling block: For how could a woman enter eternity as a goddess when everyone was supposed to be reborn? What could prevent the errant empress from being reborn as a completely normal person—even as a simple beggar? Theodora knew that as long as reincarnation was anchored fast in Christian consciousness, the people would never accept her as a goddess. And so the doctrine of reincarnation had to be completely blotted out.

Theodora selected the monophysitist monks, who were soon to be pardoned from their excommunications, as willing helpers. They were to ensure that every teaching of reincarnation completely disappeared from all church documents.

You might think that such a request wouldn’t be possible—on a practical level alone. But Theodora had spread her own network of agents over the entire empire and took care that ‘her’ monks, little by little, took over leadership of the Church. And the entire power of the Byzantine Empire was at her service, for Justinian had already become her willing tool.

But it was not earthly power alone that accomplished this evil. Demonic forces were working behind the scenes, powers that saw their chance and knew how to take advantage of it. Because if it is possible to take away mankind’s belief in the atonement of their misdeeds and the resulting reincarnation, then not only can you subvert their sense of responsibility, but you also make them helpless and insignificant. The people will forget their true divine goal (to someday become gods and goddesses themselves), giving themselves over to the mercy of an external god and forgetting their own divinity. They wait for a salvation that will never come, because in reality, each person can only save himself. Such an humanity will easily surrender the world to evil.

The powers of darkness had found two helpers with tremendous influence in Theodora and Justinian. So it isn’t really surprising that both of them were reported to be possessed. The contemporary historian Procopius offers many examples in his Apocrypha. He tells of a monk who travelled to Constantinople to present the case of a farmer who had suffered an injustice. He was immediately admitted, but just as he entered the throne room, he cringed and withdrew, refusing to appear before the Emperor, and rushed fearfully back to his room. Once there, he told the chamberlain that he had seen the ‘Lord of Demons’ sitting on the throne and his presence was so terrible that he was not able to bear it. We should bear in mind that clairvoyance was more prevalent at that time. The demon that the monk saw was by no means a product of his imagination, but a reality from the astral realm that we are not usually able to perceive today.

At another point, Procopius quotes Justinian’s mother who once confessed to her confidantes that Justinian was not her husband, Sabbatius’, son, nor that of any other man, but that he was sired by a demon.

Whatever you might think about these reports, Theodora and Justinian’s actions were definitely diabolical. In order to accomplish their plans, Theodora first had to bring the Western Church (of the fallen Western Roman Empire) under her control. Flavius Belisarius’ armies helped her in this by securing Byzantine influence in Rome and enabling Theodora’s perfidy of deposing the Pope. One of the empresses’ favourites assumed the position.

After she had thus dispensed with the opposition of the Western Church, Theodora concentrated once again on Constantinople and, with the help of her puppet, the Patriarch Mennas, she convened the Synod of the Eastern Church of Constantinople (543 A.D.). This Council revoked the condemnation of monophysitism as well as the affirmation of reincarnation, codified in 451 A.D. This was the first deathblow to the doctrine of reincarnation.

The Synod, however, was not binding for the almost 3,000 bishops spread across the Empire. And so a Council was called to sanction the decisions. Invitations were sent to all bishops, but they were written so that one could hope that none of the bishops of the Western Church would participate. Pope Virgilius, Theodora’s accomplice, condemned the letters in the harshest terms and thereby strengthened the resolve of many bishops not to attend.

Read the full article in our printed issue to find out how in 553 AD the Church officially declared the doctrine of reincarnation heresy, and the devious tricks it used to systematically obliterate any hint at re-embodiment over the following years. Yet they were evidently not quite thorough enough, as allusions to reincarnation still exist in today’s Bible – we tell you where to find these passages, and explain why the Church’s oppressive power could never have worked had not the Christians stopped believing in the fact of reincarnation. Find the full article in Facts are Facts print edition no.6.

What do rebirth, reincarnation and resurrection really mean? Find a revolutionary clarification of age-old terms here: Reincarnation Is Not Being Born Again!