Reincarnation Is Not Being Born Again!

The author of this article has studied both the early Christian teachings of the Church Fathers as well as the Eastern religions. In the Occident and Orient alike, they not only knew of the fact that every person passes through many earthly lives, but also that we will one day arrive at the point when we are born again. But what does this mean exactly? 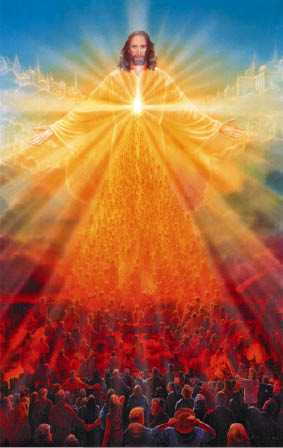 “No one comes to the Father but through me”: Is Jesus the Christ really the one and only saviour, as most Christians believe Him to be?

If you were to ask your neighbour, friend, or colleague what they understood by ‘rebirth’ or ‘being born again’, you would be amazed at the variety of answers. Assuming they don’t just uncomprehendingly stare at you like you’re a crazy person, these answers could range from total denial to faithful conviction to—if you’re lucky—well-founded knowledge.

When we look in the Gospels, the biblical core of Christian belief, the first step is to distinguish between reincarnation and rebirth. ‘Well, aren’t they the same?” you might very well ask. Not at all!

In Plato’s Academy1 , philosophical education usually began (and at that time philosophy still included all the sciences) with a discussion about what the term actually meant. Without conscious agreement on what certain terms mean, misunderstandings will be the order of the day. This school existed from 327 B.C. to 529 A.D. and it contributed greatly to the understanding of the messages from the angelic realm (= Evangelists). But wait, isn’t Christianity about faith? What does philosophy have to do with faith? Well… the churches have broken their sheep of the habit of thinking in matters of faith, even going so far as to view it as harmful. The priests much prefer to talk of the “Mystery of Faith”. The church congregation should believe, not understand.

But faith answers little if there is not previously an attempt, in the right way, to understand. Whoever takes the challenge of the evangelists seriously, to strive to know Christ (see, for example, John 17:3), cannot do otherwise than to take the first step of defining terms.

At that time, reincarnation was a matter of course for most Palestinians. Even if it was somewhat repressed in the gospels by later corrections and deletions in the canonical texts, it was not possible to completely eliminate the fact of reincarnation. This can be seen, for example, in the so-called conversation of the Sadducees and their question regarding the Resurrection (e.g. Mark 12:18-27). That there was a sect at the time that denied the Resurrection (by which is actually meant reincarnation)—and that that was what they were known for—clearly shows that this denial was not a well-established conviction. 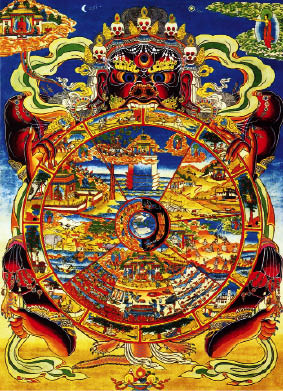 Bhavacakra—The Wheel of Life or Wheel of Reincarnation: for Eastern religions, re-embodiment is a fundamental fact, unlike for the three monotheistic religions.

Another example: Jesus the Christ says in Matthew 11:13-14, “For all the Prophets and the Law prophesied until John. And if you are willing to accept it, he is the Elijah who was to come.” So Jesus explains to the disciples that his contemporary, John the Baptist, had already come to the world in a previous life as the Prophet Elias. It is not possible to speak more clearly of reincarnation, even if we are talking about the re-embodiment of a prophet in this case.

Reincarnation is, as the Latin root re-incarnare shows, the “again-becoming-flesh” of the spirit and the soul from the spiritual world. That is: the return to the earthly world, with all your baggage—which we usually call ‘fate’ or ‘karma’. Fate encompasses the birth time and place, the historical situation in terms of mankind’s development, the cosmic constellation, being born into a given family with its genetic store, the spiritual and social environment, the abilities acquired in previous incarnations in the corresponding fields (talents), and the physical constitution. All of these things are determined by our thoughts, words, actions, and attitude in previous incarnations.

From this perspective, reincarnation is a divine gift that we are allowed to use for our continued progression.

Sooner or later, every person will have to come to terms with developing the Christ within: man’s true goal. But it could be that in a particular incarnation very different assignments or life paths are imposed that don’t necessarily lead to a knowledge of the Christ, but rather to a ‘completing’ of the wealth of experiences of one’s own self on a very worldly level in any given lifetime.

The ‘self’ referred to here is the person’s individuality in the spiritual world that develops itself over the course of many incarnations. A person’s personality—as opposed to individuality—is the “mask” (the meaning of the word-root) behind which we develop ourselves in physical life, and which is set aside at death so that new life can come into existence.

Let it be noted that there are frequent misunderstandings on this point. In the physical world we are always connected with the spiritual world. The spiritual world “carries” the physical one and permeates it to its finest layers. Anyone who denies this—such as the Catholic Church, which suggests that the individual is destroyed with the death of the personality, can only “resurrect” at the end of days, and in the same physical clothing that it wore at death (!)—brutally contradicts the evangelists and the epistles of Paul. Paul wrote in his admonition to the Corinthians: “Flesh and blood cannot inherit the kingdom of God.” (1 Cor 15:50).

Once we have defined reincarnation in its most basic meaning (i.e. the re-embodiment in the flesh), the question remains: what then is rebirth? Because man is fundamentally invested in development (evolution), it follows that we should use the gift of reincarnation for our higher spiritual development. When you look at it the right way, rebirth is hard and consistent work on ourselves, even a work that will lead to a rebirth in Christ during our earthly existence. This might initially be hard to understand, but will become clearer in the following text.

Man’s training (referred to above) to guide him to insight into the spiritual worlds usually has the following progression: preparation, enlightenment, and initiation. This is true for all the Mysteries, even non-Christian ones. Pythagoras (c. 570-500 B.C.) divided his Golden Verses into Preparation, Cleansing, and Completion. The evangelists describe many ways to come closer to the Christ and, finally, consciously become one with Him. Examples: The internalisation in the seven “I AM” Sayings in the Gospel of John, the experience of the content of the Sermon on the Mount, and the suffering of the Passion of Jesus Christ in seven steps: Washing of the Feet, Flagellation, Crown of Thorns, Crucifixion, mystical Death, Entombment, Resurrection, and Ascension.2

Well, you can extrapolate this from the Gospels when you read them insightfully. But is rebirth directly addressed in the texts?

End of extract „Reincarnation Is Not Being Born Again!“

This article deals with the mystical significance behind the seven “I AM” sentences and explains what “Lazarus rising from the dead” has in common with ancient Egyptian initiation rites. The article also contains a cross-section of the history of Christian mysticism, the Catechist school of Alexandria (where Origen taught), the School of Chartres and the Rosicrucians. This well-founded article provides a straightforward explanation of the differences between the fundamental meanings of the words ‘reincarnation’, ‘rebirth’ and ‘resurrection’. A second feature looks at the special event that so many Christians completely misunderstand: the Second Coming of Christ. Find these articles in the Facts are Facts print edition no.6.

In the year 553 A.D., 165 Church officials condemned reincarnation. Prior to that time, it had been a fundamental Christian teaching: following the trail of a conspiracy that changed the world. Find out more here: Reincarnation: The Church's Biggest Lie