Penguins: Discovering the Man Within the Bird

One of the sweetest beings on this planet is the tux-wearing, walking bird of the South Pole. Here follows some information about their lives and existence, which may surprise you. 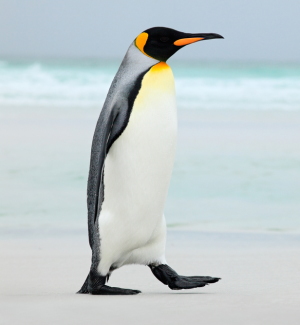 Wolfgang Weirauch from the Flensburger Hefte communicated with an emperor penguin in the Antarctica. Acting as mediator was Verena Stael von Holstein, who can see natural spirits and elemental beings since childhood and communicates with them regularly since a few years. In this case it isn’t regular channelling, but more of a conveyance of visual information from the elemental being – or, in this instance, the animal being. She then translates this superior form of communication to human speech.

The emperor penguin Ngok explained an astonished Wolfgang Weirauch that the penguins looked so human and lived at the South Pole just because man cannot live there. “Out of all animals, penguins represent humans the most.”

Penguins possess a streamlined form, because it is necessary for them to be able to swim fast (up to 36 km/hr) and dive up to 535 meters deep. Their prey isn’t found directly under the ice, thus they must be able to dive long and deep – sometimes through long underwater ice-tunnels. Due to certain compartments within their bodies, into which they pump air they breathed earlier, they can remain under water without breathing for up to twenty minutes! They need a lot of light since they navigate using their eyes and not sonar, like whales, or their sense of smell. Mankind is fascinated by the long march of the penguins to their breeding grounds. Ngok explains the reason for this long trek: “We travel to these places because our ancestor birds entered this earthly plain from the spiritual world there. Maybe you know the lullaby where God called the animals by name. The creator spirits did exactly that, also here by the South Pole.”

The penguins begin the breeding season during the Antarctic winter in May/June. The females lay just one egg each and then leave the colony to start their long way back to sea. Meanwhile the male places the egg upon his feet, covers it with a fold of his belly and carries it around in this fashion. For three months the males devotedly carry out this duty.

To this Ngok says: “The female doesn’t leave in order to torture the male, but to get food for when the chick hatches. We penguins have the possibility to store food in our craw and can keep fish there for a very long time. But it wouldn’t be possible to store the fish over months, so that both male and female can brood the egg and then feed the young with it. The time is too long for that. This is why one has to brood the egg and the other has to go off to get fresh fish. The hatchling will be raised on this feed. Penguins don’t suckle. They switch the moment the female returns and the male then goes to the sea.”

To the question of why the penguins go to the nesting place together Ngok replies: “Penguins can’t smell very well, but their hearing is excellent. Penguins are hearing-birds. They don’t have sonar. When diving they can’t hear, but among each other their hearing is very good. The pair goes to the nesting place so the female can find it again when she returns, she wouldn’t otherwise be able to find the male again. (…) The maternal powers are not needed for brooding and would even be a hindrance, as the remaining one would then have to tend to the other as well. That is why it is sufficient if the male concentrates all of his fraternal energy on the egg when staying behind. That is work enough, and so the male doesn’t have to worry about the female on top of it. But for all that, the male also goes to the nesting place as a partner in a kind of love relationship, he looks after the female.”

During incubation the males stand close together, the eggs on their feet, brooding and fasting. They look for shelter in enormous groups – up to ten penguins per square meter – and huddle closely together. At that they change places fairly: Once they are on the inside of the group and then have to face the fierce winds on the outside. When asked by Weirauch what happens with social interaction in such a penguin group, Ngok gives an interesting answer: “They lose their individuality and merge into one large organism. A kind of incubator forms then, a collective organism in which the individual has no more importance. Also, the eggs can only hatch due to an additional hood of warmth originating from the unified penguins, which the penguin forming thoughts from the spiritual world can pass into. For this the hood of warmth is needed; without it the little penguin beings can’t come into existence. In this region the frost spirits are immensely powerful and large; they would close off a single penguin from above. If every penguin would incubate on their own, their little being of warmth would not be sufficient to create an opening to the cosmos. The opening to the cosmos arises through the big warmth-egg all the penguins build together. It is so big that it can force the frost spirits aside, enabling the warm ethereal powers to enter from above.”

Indeed, so called ‘frost-giants’ exist – enormous cold spirits of crystalline nature. Once they settle somewhere it is difficult to dispel them. That’s why it is so difficult to heat up an entirely cold house again! The many loud and clamorous carneval rites from the old times are meant for them, in order to ‘dispel the winter’. Or others that include the use of fire and so generate warmth to symbolically dispel the cold spirits.

End of extract „Penguins: Discovering the Man Within the Bird“

Plus, Ngok relates how the penguin embodies the “Christ consciousness of man” in the animal kingdom and “represents people in Antarctica.” You’ll never look at penguins the same way again! Find the entire article in the Facts are Facts print edition no.3.

Read also our interview with Swiss adventurer Evelyne Binsack, who walked to the South Pole: “Where there’s a will, there’s a way!”

Find out more about the mysterious operation "High Jump" under Admiral Byrd, German flying saucers, and the entrance to the mythical "Shangri La" at the center of the Earth: Mysterious Antarctica