The internationally renowned biophysicist Ulrich Warnke from Saarbrücken in Germany has spent decades researching the effects of electromagnetic fields on living organisms. In this essay he proves by example of bird migration, among others, how our wireless communication technology has such a harmful effect on animal and man.

The relationship between life and the physical parameters of Earth’s surface and atmosphere has been known for many decades. Those responsible therefore had the opportunity long ago to question to what extent the excesses of artificially created electrical and magnetic fields might have the potential to destroy nature’s housekeeping. 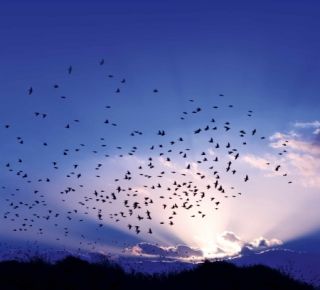 Birds in a flock are linked with each other through electrical fields of certain strengths and direction. Stronger, artificially generated electromagnetic fields can confuse a flock.

There are only two types of energy capable of transmitting information over great distances: electromagnetic and gravitational. Any forces acting beyond the boundaries of an atom can be traced back to these two energies; ultimately they have an infinite reach. Both energies are universally present and can be modulated in many ways. This is true, for instance, for light, the Earth’s magnetic field, cloud charges, atmospheric electric fields, and changes in atmospheric pressure. Together with atmospheric moisture and olfactory particles (scent), they are recognised as orientation aids to mobile organisms.

In the natural environment, there are “oscillating” electromagnetic fields of many orders of magnitude and with frequencies ranging over a virtually unlimited spectrum covering many frequency decades. They manifest themselves as a continuous and enormous “noise”—like an unlimited ocean, the surface of which is agitated by waves of any imaginable amplitude and extent. Nature has created senses that filter out very specific frequencies and intensities from this ocean of waves, analyse them, and convert them to forces. These filtered frequencies identify a specific sphere of life for specific life forms.

Only those energies that are important to the life of an animal are transformed. The forces generated from these energies control nerve cell membranes and protein structures such as enzymes—creating patterns, images and impressions that we call experience. Sensory organs are organs functioning as frequency analysers (GL), information amplifiers (GL) with gains up to a million: eyes, ears, sense of smell, taste, sensitivity to touch, light, warmth, chemical, electrical, magnetic and pain receptors.

The living world perceives stimuli such as light (including ultraviolet and infrared), sound (including ultrasound and infrasound), electrical fields and currents, magnetic fields, and also smells and water currents. The sensory performance of animals is often comparable to our technical measurement apparatus, sometimes even far superior. Physiologists can prove this by some astounding numbers: snakes, for instance, can sense temperature variations of a thousandth of a degree centigrade; long-horned grasshoppers and cockroaches can register mechanical surface vibrations with amplitudes (GL) down to 1/25th of the diameter of a hydrogen atom.

Organisms Orient Themselves to Magnetic Fields

The external magnetic fields act as moderators on the Earth’s magnetic field. They exhibit both a pronounced solar and also lunar (moon-dependent) diurnal variation.

Examples of the Use of Magnetic Earth Field Sizes

For a period of millions to a billion years, species had time to evolve and to adapt to the magnetic and electromagnetic conditions of their environment. They learned to use the natural magnetic field parameters as conveyors or carriers of a diversity of information:

Effects of the Earth’s field and of its compensation or effects of weak artificial fields have been detected in life at all levels of development: with bacteria, single and multi-cellular algae, higher plants, protozoa, flatworms, insects, snails and vertebrates.

All these examples support the existence and the vital control functions of biologically active magnetic and electromagnetic fields, with a specific frequency structure and corresponding information content, “arranged” to suit biological systems.

Artificial wireless communication such as mobile radio, radio, TV, and satellite communication is only possible because the power density of the utilised technical high frequency spectrum far exceeds that of natural radiation. Natural radiation on the surface of the earth in the 300 MHz to 300 GHz range is at approximately 0.001 microwatt/m² (= 0.001 μW/m²); today’s typical artificially created radiation level in cities is 10,000 microwatts per square metre (μW/m²)—i.e. ten million-fold. And the legal German limits even allow values up to 4.5 million microwatts (μW/m²) for the D-grid, up to 9 million μW/m² for the E-grid and up to 9.8 million μW/m² for UMTS.

As we evolved, we were of course also exposed at times to strong static and low-frequency electrical fields (typical voltages: cloud electricity up to 10,000 V, volcano electricity up to 20,000 V, lightning 500,000 V, sferics 10 V), in addition to constant static and low-frequency magnetic fields (Earth’s field, ionospheric field, cosmic field, lightning). But there were never fields as constant and with as many superpositions of different frequencies from different sources as we are now generating with our technology.

Some Bird Species Are ­Disappearing

But not only are bees and other insects disappearing—birds are as well. The house sparrow, for instance, has become noticably scarcer in England and some western European countries. An investigation carried out between October 2002 and May 2006 in Valladolid in Spain, was launched to examine whether this decline in the sparrow population was related to electromagnetic radiation from mobile base stations.

The result showed with a high degree of statistical confidence that the number of sparrows was reduced when the electrical field strengths of the antennae exceeded certain values.

A similar investigation was carried out in Belgium. The numbers of house sparrows were counted in the vicinity of several mobile radio base stations during their breeding season.This confirmed a significant relationship between the electrical field strength in the 900 and 1,800 MHz bands and the diminishing numbers of birds.2 It was noticed even earlier that storks that built their nests within a 200 metre radius of base stations could not rear any chicks, remaining without offspring. The results improved at distances of 200 to 300 metres. From a distance exceeding 300m, the stork bred with a success rate of 96.7%.

The electrical field strength at a distance of 200 metres averaged 2.36 ± 0.82 V/m, and only 0.53 ± 0.82 V/m at 300 metres. From their results, the authors concluded that the electrical fields of base stations are damaging to the reproduction of the white stork.3

Biophysicist Ulrich Warnke provides an in-depth essay on how animals, and especially birds, are oriented by their magnetic field sensitivity. He explains how birds are able to perceive high frequency transmitters, and also solves the mystery of formation flight. Find the entire article in our Facts are Facts print edition no.11.

Reports are flooding in from around the world about the lethal threat of mobile communications to birds: Too Much Mobile Ringing Will Soon Mean Birds No Longer Singing

If you would like to learn how mobile phone radiation is gradually exterminating bird populations, please click here: Birds of a Heavenly Feather