Dying Bees: To Gabble or Gobble?

Bees keep dying—wherever mobiles have become indispensible. And it’s not just the industrial countries; even developing countries are now affected. Read here about the most recent vital results that reveal how increasing electrosmog is threatening the survival of people, birds and bees and what we can do about it! 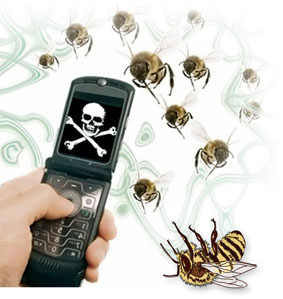 Radiation from mobile phones and transmitter masts is fatal to bees.

The 25 August 2009 marked the end of an era for Americans when Senator Edward “Ted” Kennedy, younger brother to John and Robert, succumbed to cancer aged 77. Both his brothers were shot. Yet how “natural” was the death of the “Lion of the Senate” (as he became known for his political influence) in actual fact?

For days, American TV channels broadcast seemingly endless portraits of the three now-deceased brothers of the Kennedy clan. Only rarely in this deluge of images did viewers actually learn what killed Ted Kennedy: a brain tumour, to be precise.

Not a single journalist or commentator questioned the possible cause of cancer in these reports. And if anyone did consider it, they kept their mouths firmly shut, knowing full well the kind of avalanche it could trigger.

In all likelihood, Senator Kennedy had literally cooked himself to death. How? With a small “microwave oven” that billions of people across the world hold against their heads every day. For 47 years in the US Senate, Edward Kennedy had been a very influential man who would use his mobile phone to talk to other important people day in, day out. And there, behind the ear to which he pressed this little device, the cancer began to run riot.

An ironic twist of fate? On the day of Ted Kennedy’s death, an international EMF working group published a report in Berkeley, California claiming that mobile phones cause brain tumours. This exposé was written by renowned scientists and is entitled Cell Phones and Brain Tumours: 15 Reasons for Concern. Science, Spin and the Truth behind Interphone. “Exposure to cell phone radiation is the largest human health experiment ever undertaken, without informed consent, and has some 4 billion participants enrolled,” said co-author Lloyd Morgan at the press conference. “Science has shown increased risk of brain tumors from use of cell phones, as well as increased risk of eye cancer, salivary gland tumors, testicular cancer, non-Hodgkin’s lymphoma and leukemia. The public must be informed.”

This view was obviously shared by at least one colleague to the late Edward Kennedy: not one month later, Senator Arlen Specter called a hearing on the 14th September 2009 before the responsible subcommittee of the Senate. The subject: “Brain tumours and cell phones”.

Cause of death not known?

We humans are not the only ones involved in this “largest health experiment of all times”—billions of other life forms that neither buy nor need mobiles are also affected. A good two years ago, our humming insect friends hit the global headlines, albeit not quite so prominently as the dead Senator Kennedy. Back then, experts and beekeepers were racking their brains over mysterious bee deaths in America, Europe and Asia, which had never been seen to this shape, form or extent before. Mysterious, because almost no perishing insects were found in the beehives—they were simply abandoned. And as ever when experts are uncertain about something, the phenomenon was quickly given a name: CCD—Colony Collapse Disorder.

Particularly badly affected was North America, where up to 90 percent of the bee colonies had diminished in certain places. Even Europe reported huge losses. And today?

Well, today everything has gone quiet in the press; the media have turned to allegedly more important topics like the financial crisis. Yet still the bees keep disappearing. In 2008, up to 70 percent of the population died on America’s East Coast (in the USA more than a third of all bee colonies have perished), while in Germany numbers fell about 25 percent.

Collapse of the Immune System 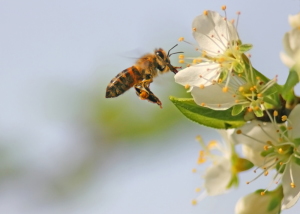 Does a lack of bees mean that we are supposed to pollinate our pear trees by hand?

Dennis van Engelsdorp of the American Association of Professional Apiculturists (University of Pennsylvania) Research Institute is among the scientists asked to investigate the bees’ mysterious disappearance. He relates a heretofore unknown phenomenon: “We have never seen so many different viruses together. We also found fungi, flagellates and other micro-organisms. This multiplicity of pathogens is confusing.” Van Engelsdorp suggests that the mysterious phenomenon is due to an immune deficiency, and poses the vital question: “Are these agents the causative stress factor or the consequences of a totally different stress?”

German magazine Der Spiegel quotes Diana Cox-Foster, a member of the CCD Working Group: “It is very alarming that the deaths are associated with symptoms that have never been described before. The animal immune system appears to have collapsed, and some bees are suffering from five to six infections simultaneously. Yet the dead bees are nowhere to be found.” (Spiegel 12/2007).

German researcher Dr. Sc. Ulrich Warnke, bio-scientist at the University of Saarland, explains why. He was among those who coined the current popular term “electrosmog” and has been dealing with the effects of electrical and electromagnetic fields on organisms for over three decades. According to Warnke, technical magnetic fields disturb the Redox or NO system1 in bees, which is enormously important for all life forms. If the Redox system balance and related free radical balance are disrupted, Warnke maintains, then the bees are no longer able to orient themselves by smell, and their vital learning processes no longer function. In other words, they fly in the wrong direction and cannot find their way home.

This is one of the first scientifically proven indications that electrosmog is indeed responsible for the mysterious disappearance of entire bee populations, as well as the actual cause of the many different bee diseases. As Warnke says, “But since NO also materially controls the immune system, disruptions to the NO household always affect the immune defences of the organism as well”

Although bee honey is completely a-bacterial (it does not spoil) and even has a strongly antiseptic effect (you can clean wounds and accelerate healing with it), the bees’ immune system crashes—very similarly to people. But why?

In the eyes of many alternative therapists, this is no coincidence. Instead, it is a typical, easily explainable consequence of electrosmog, from which more and more people are suffering—whether through low-frequency (power lines, home electricity, electrical equipment) or high frequency (telecommunications).

A damaged immune system can provoke a nigh-on immeasurable torrent of potential consequences, since every individual has specific biological weak points that can then manifest themselves as various diseases. This means that the same disease profiles do not form in everyone, which also makes it very difficult to prove a scientifically-tested connection with the electrosmog problem.

It is easy to forget that practically all physical illnesses have one and the same root: a disruption of the metabolism within a cell and/or the disruption of communication between the same. The cell is the smallest biological unit of every single organism, of course. Therefore it is the cells that react extremely sensitively to electromagnetic fields and radiation. This has to be so, as all life processes are ultimately guided by sunlight—i.e. by electromagnetic waves. Almost as important is the earth’s magnetic field, while even the food we eat exhibits a demonstrable energetic potential. From fish to plants, things exposed to a special electrofield are growing bigger than usual; agricultural crops are providing far higher yields and sometimes these animals and plants are even transforming into “new” much more robust prototypes, which in many cases had been extinct for a very long time!2 Modern energetic medicine has worked successfully with electrical impulses, magnetic fields and certain frequencies for years in order to heal people fully without falling back on pharmaceutical drugs. And they’re telling us that the technically-generated waves from mobile phone towers and other telecommunication transmitters are not supposed to influence living cells?!

In fact, cells communicate with light impulses (which can also be demonstrated thanks to Kirlian photography and other technologies) i.e. with electromagnetic radiation. This is, however, mostly a billion times weaker than today’s normal “limit values” for telecommunications, which are supposed to “protect” our health. Living cells bombarded with all this technically generated radiation is like a classical guitar ensemble attempting to play Vivaldi, while right next to them ear-splitting rock music suddenly pumps out of 1000 watt loudspeakers: the classical musicians go out of time and can’t play together any more. Of course you have to ask yourself what sort of idiot would start plucking at his guitar in a place like that, yet how on earth are life forms supposed to get away from such far-reaching mobile phone radiation coverage?

If cells “go out of time”, the organism becomes sick. Cell communication can be disturbed both by the intensity of the radiated microwaves and because modern telecommunication, especially mobile phone technology, transmits on those very frequencies or “biological windows”, which cells can “hear”. And as technical radio strength is exponentially bigger than the “volume” with which cells “speak” to each other, cell damage must already appear in field strengths that are far below the official “limit values”—even more so because these “limit values” are based exclusively on the so-called “thermal effects”. This means that they are simply supposed to inhibit damage, which can arise from the body overheating, because someone has held their mobile to their ear for too long on a phone call (shades of heated food in the microwave oven here!). No other damage is considered at these “limit values”.3

End of extract „Dying Bees: To Gabble or Gobble?“

The most up-to-date studies are investigated in our new report on cell phones, demonstrating that it is no longer just bees that have been suffering from mobile radiation, but also increasingly birds and bigger animals, too. Scientists also explain clearly and simply why bees react so sensitively to electromagnetic fields and radiation. Read about the most recent findings on how migratory birds navigate during their long journeys, and what all this has to do with the HAARP Project, for example.
Read about the most important facts on the topic of mobile telephony and why we must expect a huge increase in cancer among the population over the next few years. Find the full article in our Facts are Facts print edition no.4.

A Swiss vet presents a number of solid cases to show how pets such as dogs, cats, horses, etc. are also suffering from the effects of mobile and cordless phones (DECT). Read our article: Antenna Towers make it a Dog’s Life…