Why damage from cell phones is only now beginning to come to light. 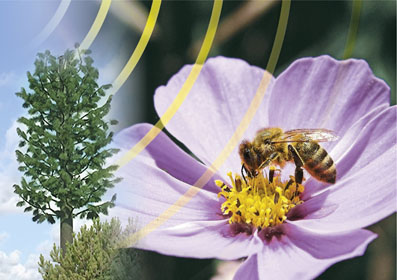 Wolf in sheep’s clothing: what looks like a tree is actually a mobile phone mast (left).

Critical souls might like to ask why many animals, mainly bees and small birds, have only been suffering so greatly from mobile telephony for the past few years. We’ve been using mobiles for about fifteen years now—and technical radio waves from the military, radar, and TV and radio have been going on for much longer. Does this mean that microwaves are not the prime reason for the suffering or even dying out of these animals?

Of course not! It is easy to explain why the situation has worsened so dramatically in the last few years, despite the complexity of the topic.

In many ways, living organisms are Nature’s true marvels. Most of them, including our bodies, can still function faultlessly even if things are not going particularly well. Even under stress or deficiency, the body does not exhibit any signs—at first. In time, perhaps you may get a little weak, but even so everything still runs smoothly. Maintaining this biologically in-programmed behaviour even when the body’s functions are in the “danger zone” is a fundamental requirement for a species to survive in emergency situations. However, these emergency situations must be limited—if they go on for too long, the body’s resources become more and more depleted until it collapses—and this happens suddenly, not gradually. So even the smallest additional strain can become the so-called straw that breaks the camel’s back: people fall sick “for no apparent reason” of cancer; bee colonies die off “out of nowhere”.

The danger is that we do not recognise it until it’s too late because symptoms did not appear, or were not correctly diagnosed. In other words, our body’s vast “ability to suffer” will ultimately be our undoing. If we were hit with a horrendous headache every time we used our mobile for a while, we would quickly decide to keep our mobile chit-chat to the absolute minimum.

As early as 1972, Canadian scientist Dr. Abram Petkau discovered that even the weakest radioactive radiation can damage living cells if they are exposed to it for a long time (chronically). In contrast, higher doses of radioactivity over the short-term (acute) causes less cell damage. As a result, the “Petkau Effect” was formulated, which applies to any type of ‘unnatural’ toxic substance—i.e. those generated by mankind that are not otherwise present in Nature: a low dose over a longer period of time is more harmful than a higher dose over a short period of time!

Whether asbestos, pesticides, pharmaceutical drugs, artificially generated radioactivity or mobile phone radiation—the longer we are exposed to these stresses (which do not naturally occur in Nature), the more dangerous they are—even in the smallest doses. This means that limit values for long-term exposure are invalid because they are not able to protect us effectively!

In contrast, Paracelsus’ Law applies to ‘natural’ toxic substances: in this, the dose determines the poison. This is why you can, for example, either kill or heal a person with snake venom or poisonous plants, depending on the dose administered.

Scientists and legislators are making a huge mistake if they think that unnatural electromagnetic radiation fields are the same as naturally occurring burdens whose dose simply should not exceed a certain limit—and the consequences on future generations will be clear for all to see.

In short, mobile radio is subject to the so-called Petkau Effect: the longer a biological organism is exposed to this radiation, the more it is damaged. Fatally, we all live constantly in this radiation because over many years we have transformed our world into a planetary microwave oven!

E-Smog is on the Up 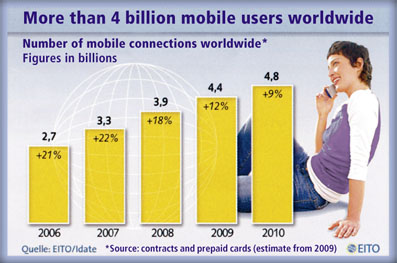 Huge growth rates: people are chatting on the move.

According to a statistical projection based on scientific data carried out by researchers and lead by former mobile telephony insider and American physician Dr. George Carlo, 2012/13 could prove a fateful year for humanity. If mobile telephony continues growing at the current rate, at some point in the near future most people’s immune systems will no longer be able to tolerate the global microwave exposure. It is feared that an epidemic of brain tumours and many other types of cancer could “suddenly” break out practically all over the world.

In 2006, 2.7 billion mobile phone connections were registered. By the end of 2009, this figure will have reached 4.4 billion—and there’s no end in sight. In industrial nations, growth rates remain between one and four percent since each inhabitant already owns more than one mobile, yet in recent years threshold and developing countries have reported nightmarish growth rates within the two-figure percentiles—cordless chitchat has become affordable even there. The number of mobile users in India alone is expected to rise about 32 percent to 457 million this year, a figure which makes it obvious why the Indian people are commenting on the fact that bees and sparrows are “suddenly” disappearing!

UMTS instead of GSM

These days it is not enough for people to own a mobile and use it just to make calls. No, we also want to use our mobiles as multimedia devices to send music, pictures and even entire films through the ether. Yet as these contain much more data (all transmitted by radio), exposure to microwave radiation is soaring. Consequently, the second generation GSM mobile phone standard is not sufficient, even though these now-old mobiles were able to send or receive up to 220,000 units of information (220 kbit/s) a second. The newer third generation UMTS network, on the other hand , enables a data transfer of up to 7.2 million information units per second (7.2 Mbit/s) and is therefore almost 33 times quicker (and accordingly causes more electrosmog).

In order to enable this massively increased capacity, UMTS uses a different data transfer process to GSM. Unfortunately this new technology is much more dangerous for living cells than the already-harmful GSM standard. In the globally-recognised REFLEX Study (2000-2004, financed by the European Union) Prof. Franz Adlkofer proved that GSM mobile radio already causes damage to our genetic make-up (DNA) and thus can considerably increase the risk of cancer. On 1st October 2007, the German physician and university lecturer warned urgently of the dangers of the new UMTS standard, whose introduction he criticised as an “uncontrolled and unplanned field trial on people”. Says Franz Adlkofer: “DNA strand breaks already appear at a fortieth of the limit value. UMTS signals are thus almost ten times more effective [gene damaging] as GSM signals.”

In summer 2000, Germany alone took approximately 50 billion Euros (at that time 98.8 billion DM) from the auction of UMTS licences. The Germans want to auction more UMTS frequency blocks by mid 2010.

The first global UMTS network began operation on the Isle of Man in the UK in 2001, followed by Austria the year after. Yet just a few years later, UMTS had begun to be mass-marketed in Europe (in Germany this new mobile radio standard only became commercially available from 2004). This means that most Europeans are still using the older GSM network—although not for much longer. According to an official prognosis, the number of UMTS connections in the EU grew 36 percent to around 172 million in 2009, while the number of current GSM connections decreased about five percent to 469 million. In Switzerland more than one in three, that’s more than three million mobiles, uses the UMTS standard—46 percent more than the previous year. And this is just the beginning.

A timely link should be mentioned at this point: since the UMTS network has begun to dominate, increasing numbers of bees and birds are vanishing. There is no doubt about it—we are literally cooking ourselves to death with our home-made bombardment of microwaves. And just like the frog in the heated water glass, we won’t notice the gradual change until it’s too late.

What Can We Do?

Go without your mobile! If that isn’t possible, use it only to send text messages and keep your calls as short as possible.

Use cable telephone equipment at home and at work. Most DECT base stations radiate constantly on full capacity regardless of whether you are making a call or not. If you depend on a DECT phone, at least ensure that the base station is only active during a call (the corresponding new models have the label “ECO mode+/Ecomode plus” or “fulleco”).

Avoid cordless Internet connections (WLAN) for your computer. It is not necessary to surf the net on the toilet, your commuter train or in the park!

Inform your friends and acquaintances about the dangers of microwave radiation, even if this is an awkward endeavour. Put pressure on the authorities and politicians. It’s time to dust off your armour and fight for life!

The German Association Kompetenzinitiative zum Schutz von Mensch, Umwelt und Demokratie e.V. (Competence Initiative for the Protection of Humanity, Environment and Democracy) in which renowned scientists have joined together, has published a series of articles on the Effects of Mobile Phones and Communication Radio. Four brochures have appeared in German to date (English translations are underway), which we cannot recommend highly enough to our readers: these put together the most recent and most important results in a clear and comprehensible way, and serve as an important tool with which to tackle this problem.

This whole article has been published in Facts are Facts print edition no.4.