Across the globe, the privatisation of public goods pours billions into the coffers of big business. In the case of water—that vital, basic resource—consequences such as raised prices and reduced quality are particularly drastic. As you might expect, opposition is strong—and effective.

“The water belongs to us!” chanted tens of thousands in Cochabamba, Bolivia’s fourth biggest city. They weren’t afraid, even though their protests had led to the declar­ation of martial law, many activists had been imprisoned, thousands injured, and several citizens had already been killed by the police or military. 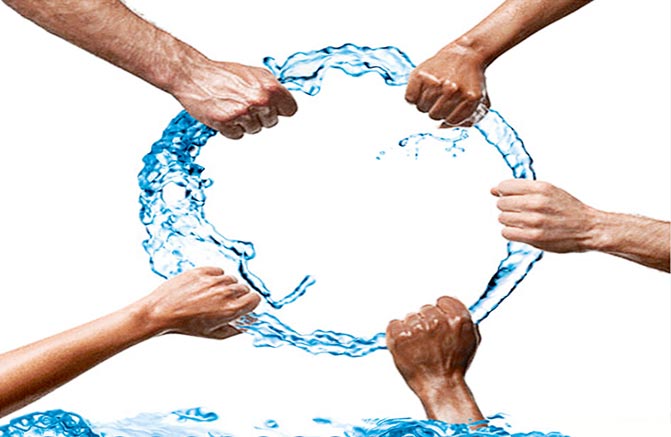 Something devilish is going on around the world: private businesses are seizing control of water, the Creator’s gift to humanity—with dramatic consequences for us all.

In front of a live TV camera, an elderly woman went up to a policeman in full combat gear and declared with heroic courage: “I am unarmed. But if you want to fight, let us fight.” Soon afterwards, the angry crowd managed to drive off the police and security forces, forcing them back into their barracks. The private water company Aguas del Tunari, a joint venture backed by the Ameri­can firm Bechtel, among others, couldn’t get out of the country fast enough. In April 2000, after half a year, the people had won the “Water War.” They had prevented the cession for 40 years of their water to Aguas del Tunari, which increased prices by bet­ween 30 and 300 per cent right from the outset. “Eventually, a law was passed that—when read between the lines—made it ­illegal to even collect rainwater,” Oscar Oliveira, one of the resistance leaders tells us. And the woman who so bravely stood up to the police concluded: “I was ready to die for our water.”

In Greece and Portugal, a catastrophe similar to Bolivia is just around the corner: the Troika, consisting of the European Central Bank (ECB), the European Commission and the International Monetary Fund (IMF)—all three organisations devoid of democratic legitimacy, and subject to heavy criticism—demands that the bankrupt countries make swingeing cuts. The list of privatisations includes the waterworks of Athens and Thessalonica, and the Portuguese state water company Águas de Portugal. Hundreds of thousands of Portuguese have already demonstrated many times (for example, taking to the streets to protest against austerity and the planned privati­sations) without making the news in the rest of Europe. In the small town of Pacos de ­Ferreira in the north of the country, the water supply was taken from the public sector years ago. The locals despair, as a report by the WDR (German public broadcaster) highlights: prices have risen by 400 per cent, and even drinking water from wells is now banned, although it was once common.

Just a short time ago, it was more or less unthinkable that countries could be pretty much forced to privatise water. But it seems that anything is possible under the pretext of the financial crisis, so it shouldn’t come as too much of a surprise that the European Commission has decided that now is the time to push through the so-called concessions directive. The directive envisages EU-wide tendering for public services under certain circumstances—including water. It doesn’t necessarily directly force privatisation, but it does allow big business to get a foot in the door. The European Commission argues that in order to “optimise the internal market in times of crisis,” more private companies should be able to make profits from publicly funded infrastructure. The directive should ensure “improved access to markets for EU businesses.”

Even Renate Brauner, the otherwise ever EU-friendly Vice-Mayor of Vienna and City Councillor for Public Utilities, claimed that it was “a back door to the privatisation of important public services.” Protest soon stirred across the EU, leading first and foremost to the launch of a European Citizen’s Initiative. All the ECI can do, though, is mitigate some of the worst effects of the legislation—it can’t stop the EU’s move toward liberalisation and privatisation of public services, including water. The only way countries can decide for themselves how to manage “public property = the people’s property” is to leave the EU.

Only since 2010 has the right to water been an official UN human right. Nevertheless, water is a scarce resource that every human needs and from which businesses and rich private individuals can make big profits—and use to wield a lot of power. Jean-Luc Touly has shone significant light into the darkness. The Frenchman spent 30 years working for Veolia, both in upper management and as a trade union official. By his own account, the company wanted to buy his silence with €1,000,000 hush money—which he turned down, immediately followed by his sacking. 2010 was also the year in which the film Water Makes Money came out—and Touly was its main source of information. Veolia tried to prevent its distribution, whereupon the film was premiered simultaneously in over a hundred towns and cities across Europe.

Nearly every water privatisation has seen the favoured companies letting prices shoot up while at the same time cutting back on essential maintenance work. As a result, water quality has often suffered. In France, where most water companies are private, almost all water is chlorinated; by way of contrast, hardly any water is chlorinated in Germany, where water supplies remain mostly municipal. According to a study conducted by the French equivalent to Which?1, the price of water in French cities supplied by private water companies is inflated by 30-40 per cent. Average losses due to leaks in French drinking water supplies are 26.4 per cent—the figure for Germany is 7.3 per cent. Secret contracts and corruption were/are the order of the day.

• The supply of water to Grenoble in the French Alps was in good condition before it was acquired by Suez, France’s second-biggest water company. It is believed that as a token of gratitude, the mayor received bribes worth millions in the form of travel, cruises, flats, and funding for his election campaign. The water price was raised sharply, yet maintenance work was drastically cut back. Roughly a decade later, Grenoble’s water supply was taken back into the public sector: maintenance work was tripled, but prices have remained largely constant. At first, the corrupt mayor Alain Carignon continued his rise, becoming Communications Minister in the Baladur government, but eventually he ended up in prison. Jérôme Monod, then Chairman of Suez, remained unaffected. In 2000, he became President Jacque Chirac’s closest advisor.

• Again and again, companies such as Veolia and Suez lured mayors with the pro­mise of paying an “entrance fee” for their water: the town council would retain ownership of the facilities; the private company would run them and pay handsomely for the privilege. That’s the concept of Public-Private Partnership (PPP), designed to faze opponents of privatisation. In reality, it repeatedly became clear that this ‘partnership’ was nothing more than a concealed loan, to be paid back with interest many times over by the water customers. In Braunschweig, Germany, for example, Veolia (which was running the sewage system) paid nothing for the right to use the drains, being allowed to do so for free. The loan was serviced via a front company (Abwasserverband Braunschweig) and the city’s debts were transferred to various different companies. Despite the sale of the “family silver”, Braunschweigers found themselves paying more than ever. The contracts were kept secret—a common tactic in other towns and municipalities—and were leaked to opponents of privatisation from within the administration.

Cities the world over have been faced with similar problems—from Berlin, Toulouse and Klagenfurt to Budapest, Odessa and Casablanca, even Haikou in China. Yet local opposition can bear fruit: in Paris of all places—the power centre of the water giants Veolia and Suez—the city government succeeded in bringing water back under municipal control. Joyous celebrations ensued—fuelled by water. Several French towns and local authorities have already followed this example.

In the full article you will discover just how deeply European politics has already been captured by lobbyists from the water multinationals, and just what means investors like the Bush family and Big Oil are using to seize control of as much of the blue gold as they can. If the public stands up to them, they can still be stopped. We show where and how the public have already successfully resisted.

The full article is available in Facts are Facts print edition no.14

Want to know just how multinationals are trying to seize control of food supplies worldwide? Then click here: Patents: Taking ­Control of Life Itself

An evocative exposé of the (mostly suppressed) dangers of genetic engineering can be found here: Genetic Engineering: The 'Safest' Way to Get Sick