Humanity moves across the earth in seven great evolutionary waves. A cosmic plan is at their source that leads each individual human soul to perfection – even if it takes aeons to do so. A person incarnates in different root races until he or she has finally learned everything that this planetary classroom has to teach. 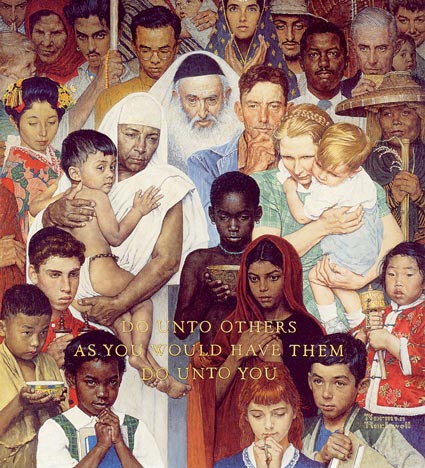 Be warned, dear reader: this article is politically incorrect – at least at first glance and for superficial demagogues. You will read the word ‘race’ more times than you can count. You will learn of our thesis: that there are truly and incontrovertibly different races on earth – a yellow one, a red one, a black one, and a light-beige-pink one, which people mistakenly insist on calling ‘white’. And of course, black isn’t always black, but encompasses all shades from light brown to dark mahogany; red often appears brownish, and yellow is a shameless exaggeration for that beautiful olive-bronze tone which hides behind this racial description. And the light-beige-pink humans spend countless hours and sweat to get at least a little red-bronze colour – although some of them are still proud of calling themselves ‘white’, even when they are as brown as a pretzel.

Ah, all the politically correct thought-police have pulled out their highlighters and are now underlining every third word in this essay that could find me guilty of racism. I’m afraid I’m going to have to disappoint you if you want to put everything in the same box, because I find it incredibly beautiful that there are small-hipped, fat-bellied, bald, crinkly-haired, button-nosed and long-nosed, brown and blue-eyed people on earth. And I love to see the glowing eye whites in black skin; the porcelain complexion of a Japanese woman, and to catch the sight of light-brown legs in the early spring that weren’t baked in a tanning salon.

So the first postulate is out in the open: It is wonderful that there are so many different types of people, and it merely reflects a Westerner’s inability to love that they think they can only make it through life, in one piece physically, sporting an ideal nose from ‘Doctor Nipandtuck’.

Maybe you think a red rose is the most exquisite of all flowers. But would you still think it was the most beautiful and most precious if suddenly only red roses were to be found blooming on all the lawns, marshes, and gardens of the world? Exactly.

Second postulate: A person is not his body. What makes a person a person doesn’t belong to any race. Spirit is spirit. Spirit is light, and light is light – whether it moves around in a black, brown, reddish, bronze, or light-beige body. We all look the same under our skins.

Third postulate: Since reincarnation is a fact (in spite of that what the politically correct thought-police care to believe), no person is ‘white’ or ‘black’ or ‘red’ forever. “You choose your next life by what you do in this one.” (Richard Bach: Jonathon Livingston Seagull). The nature of the life experiences to be had determines what nation one is born into and what colour the skin.

For example, people who incarnate in China want to learn humility. Someone once said about Switzerland (and this is just a hypothesis), that it is possibly the home for older souls who have had rather difficult experiences and who therefore need a land that gives safety and security. Be that as it may! To hate or despise a certain race means we have stamped our ticket for that race. In our next life, we will be able to experience ourselves what it feels like to be despised by others. Or we may decide to atone for past hate by working especially hard to end discrimination towards people from another race.

Denial of the obvious motivated by political correctness – that there really are different races of human beings – leads today to the belief that skin colour is only dependent on the kind and amount of vitamins that various peoples consume through diet or sun. This is what the Californian anthropologist Nina Jablonski claims. Or, like Dr Robert S. Schwartz, one shrugs off racial differentiation simply as a ‘social construct’ devoid of any scientific classification. For Dr Schwartz, then, all studies that have brought racially specific differences to light (e.g. a study showing the response of people belonging to various races to certain medical drugs) are nothing more than pseudo-science.

Undoubtedly, the oppression of foreign races is one of the darkest chapters in human history. Slavery, or even the daily discrimination that was still practiced in the USA or in South Africa until only a few decades ago, and was seen as natural and appropriate, was a disgrace for all those who believed they were the ‘chosen ones’ amongst mankind because of their lighter skin tone. The way out of this dark tunnel of inhumanity is not, however, to be found in seeking escape in the tunnel of ignorance, and then looking around in the darkness and claiming that there are no races (because in the night, not only does every cat look grey, so does every person). The way out is through seeing the divine that can be found in every person’s eyes – no matter if they are round or almond-shaped, black or blue. We are all travellers on a long journey and every life is a stage. Some are further along the way, while others dawdle on enticing detours, and then there are those who trail far behind – but ultimately, all will attain the goal of re-found divinity. And sometimes the slower traveller crosses the finish line ahead of someone who starts too ambitiously and overexerts himself, giving up just before the end. So who has the right to judge?

After this introduction, it should be clear to even the most critical reader that we do not want to preach a sermon about supermen or subhumans, a teaching which is a product of the Antichrist – namely a result of arrogance, superiority, and self-righteousness, and therefore a lie through and through. But it must still be possible, even in our current political climate, to conduct evolutionary research and publicise the results. Otherwise, we live in ignorance, decreed by law – and ignorance is a dangerous breeding ground for misjudgements and misdeeds of all kinds.

The Human Was Not Always ‘Human’

If we take a look back through the evolutionary history of humans on this planet, we find five large evolutionary waves that have been called root races in the occult writings of the East. There are seven in total; but we today are only at the beginning of the sixth wave and the seventh wave lies far in the future. “Each of the seven races sends seven ramifying branchlets from the Parent Branch: and through each of these in turn man has to evolve before he passes on to the next higher race; and that – seven times,” writes the Master K.H. in The Mahatma Letters.

One continent belongs to each of these races. The people of the very first, ‘Adamic’ root race who lived on the newly created earth have very little in common with today’s humans. They lived in the area of today’s poles, which were supposedly tropical at that time. They were happy innocents, etheric and in a state of childlike consciousness. They were made solely from the elements of Air and Water, according to Blavatsky’s Secret Doctrine. They lived in gigantic, ‘hazy’, subtle bodies and their only sense was hearing. This race was genderless and did not yet possess ‘human intelligence’. These innocent people, who knew nothing of evil or sin, lived hundreds of years in their etheric bodies before they laid them aside and, just as we change our clothes, took on a new, fresh body. They didn’t know actual death; and as soon as they had passed through all seven sub-races of this first root race and had completed all of the necessary experiences in their allotted time, they were freed from the wheel of reincarnation and journeyed on to another planet.

The second root race, the ‘Hyperborean’, lived on a continent that surrounded the North Pole like a ring – that is part of today’s Greenland, the far north of Siberia, Alaska, and Canada. The Earth at this far distant time was still not completely solid, i.e. not yet really physical, and the conditions for life in this area were similar to those today in the tropics and subtropics. The beginnings of the sense of touch were added as the second sense. The people of this second race were still etheric and they were androgynous. They reproduced, as strange as this will sound, by division or breaking apart, rather like a cloud that splits in two. These humans became increasingly solid throughout their evolution until they finally incorporated the element of Earth.

The people of this wave matured in large eggs (remember the movie Cocoon?) and emerged from them like birds still do today. So we can see that the development of human reproduction began in the mineral kingdom, as it were, (with the outpouring of its essence) and developed through plant-like reproduction (a severed part of a plant is able to reproduce the entire plant – see the creation of Eve from Adam’s rib) to the bird and animal kingdom (maturation in an egg), until it finally reached the sexual reproduction of the animal kingdom. But this will not be the end of human methods of reproduction. All of this, however, relates only to the reproduction of the lowest vibrating human body. Far in the future, when humans have become etheric again, they will create their children by joining the light streams of two beings – as we might imagine angels reproducing. In the middle of the second race, “He (Man) is still gigantic and ethereal but growing firmer and more condensed in body, a more physical man. Yet still less intelligent than spiritual, for mind is a slower and more difficult evolution than is the physical frame….” (Secret Doctrine). These primitive beings were made from astral material and would be invisible today, which is why there are no traces left of them that can be detected by science. These people also lived in an ideal world and completed their ascension to higher worlds in the time allotted them.

The actual ‘becoming human’ only took place in the course of the third, or ‘Lemurian’ root race, during the Jurassic. Like the plants and animals, humans were also gigantic as they began to develop bones and separate into two sexes. Now they became bodies, clothed in animal skins, as we read in Genesis, along with, “There were giants in the earth in those days” (Genesis 6:4 [KJV]). That is when actual human evolution began, as is symbolised in the Bible by Adam and Eve.

In the full article we introduce all seven of humanity’s original root races, describing their outstanding qualities and the higher cosmic reasoning for their existence. For humanity too develops according to the evolutionary plan foreseen by the Godhead. This article will provide you with new insights into the history and direction of human development.

A series of three articles telling the story of Atlantis can also be found in this edition: Atlantis - A Myth Abused

In the same edition of Facts are Facts we also dedicate a nine full-page article to Lemuria, the myth-shrouded lost continent that existed long before Atlantis and sank in the floodwaters of what is today the Pacific: Lemuria – The Lost Continent