These days we may as well talk about Mother Plastic as Mother Earth. That’s because everything today is made of the stuff: it’s considered pretty (artificial flowers), cool (mobile phones) and essential ­(bottled water). But plastic is much more than that—first and foremost it’s dangerous to our health. Read here how dangerous your water bottle really is and why it can be an effective method of ­contraception! Why? Because plastic can make you infertile! 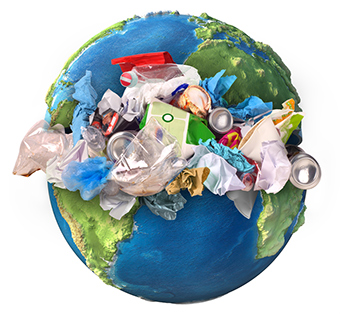 How much plastic can our planet take?

When about 250 million tons of plastic are produced every year on top of what’s already there, then it can safely be claimed that plastic is everywhere. Don’t believe it? Then how come traces of plastic can even be found among the Eskimos and Amazonian Indians? How is it possible for Amazon Indian tribes to be “contaminated” by plastic substances? Simple: plastics are not at all as safe as the industry would have us believe. A variety of ­factors means that highly toxic chemical substances in plastics are released into the natural world and from there get into the food chain. Or the film set. Just imagine—you’re a stuntman in the deserts of Morocco where films such as Star Wars, The Mummy, Gladiator, Prince of Persia, etc. are regularly shot. But these days you have to clear the whole desert of plastic before filming can even start. That’s the reality.

Why Are Plastics So Dangerous to Health?

The problem arises during manufacture. A manufacturer of plastic bottles buys the basic materials from a supplier of his choice. Plastic in its basic form mostly occurs either as powder or pellets, from which the manufacturer produces his bottles. The dangerous thing is that he doesn’t know how his supplier has manufactured the pellets or powder. He just gets told: “Look, my product is the best. It’s thick, it won’t alter the flavour of the drinks, it won’t break and it won’t fade. It’s so good that unfortunately I can’t tell you the precise ingredients because these are protected and therefore secret!” And that’s that. So the bottle-manufacturing company never gets the chance to test whether all the ingredients are non-hazardous.

Added to this is the fact that these days most “cheap plastics” are produced in countries like China where health spe­cifications are much lower, or indeed ­non-existent. It’s no problem to get plastic produced in China that no one would ­ma­­­nu­­­­­­facture for you in Europe. In China, highly toxic substances—which are ban­­­ned in the EU—are used to produce plastic. The Chinese manufacturers are most likely aware of this, but don’t seem to care. Instead, they point out that the employer is responsible for adhering to the requirements of his country. If the employer in question isn’t bothered about maintaining these standards, then we may eventually come into contact with these dangerous materials in Europe—despite valid safety restrictions.

One clue as to whether or not you are in possession of “inferior” plastic is if the pro­­­­­­­duct smells (sweetish, sharp and irritating odour): these are toxic and potentially harmful gasses. In the case of PVC, it could even be carcinogenic.

Officially, it is assumed that plastic is an almost inert material. This means that under normal conditions (i.e. for which it is intended) the plastic product does not react with other chemical substances. Yet unfortunately this is not so. The human geneticist and environmental health scientist Klaus Rhomberg warns that plastic is anything but inert and that substances can actually be released from it through normal use, abrasion and heat, for example. (Is that why Evian states on its labels that you should store its bottles “away from sunlight”, perhaps? Maybe it’s not just because heat causes dangerous germs to form…)

Effects on the Body

Various types of plastics contain different chemical substances that change its properties, making it soft, stretchy, taut, milky or transparent for instance. They are added because they do not form any chemical bonds with other components of the plastic. As a result, these plasticisers, ­fla­me retardants or stabilisers are “free” and can therefore be dissolved relatively easily, or gradually escape from the plastic. Re­­search has recently indicated that these leaking chemical substan­ces can have devastating effects on the body.

Such as… In a PVC factory in Venice, 170 workers died of cancer as a result of having breathed in toxic vapour during the production of vinylchloride (basic product of PVC). 377 more fell ser­iously ill, including from Raynaud Syndrome (triggered by vinylchloride), which causes the limbs to become numb and white and feel constantly cold. However, the factory in question staunchly refused to accept any blame. Italian prosecutor Felice Casson was the only legal professional that was prepared to take on the job—perhaps not so surprising when you consider that he had already acted against organised crime, human trafficking and drug rings. Clearly a man for getting a tough job done. Casson says that all international corporations have sig­ned a non-disclosure contract in which they swear to keep under lock and key all studies and data proving that PVC is carcinogenic. Those who came into possession of such documents and evidence were obliged to sign this confidentiality agreement.

Hard to imagine, isn’t it? But the best is yet to come—just consider this example of what the plastics industry is built on: for his film Plastic Planet, director Werner Boote visited a plastics trade fair in Düsseldorf to confront the exe­cutives of PlasticsEurope with his findings. With him he had brought more than 700 studies proving the danger of plastics (female snakes growing penises; diabetes in children; cell death; children with behavioural problems; more plastic than plankton; testicular cancer in children; etc.). Boote is of course a fair film-maker and also brought studies with evidence to the contrary. Although, believe it or not, there were only ten of these. Ten! The fact that these studies were commissioned and financed by large international corporations doesn’t really improve matters. It comes as no surprise to find that the film team was rather unceremoniously booted out of the trade fair.

But back to our company in Venice. In the end, the Italian High Court confirmed that there was indeed a link between vinylchloride and these dangerous illnesses (also confirmed by the WHO). It was also proven that the company had known of the dangers—and that vinylchloride is carcinogenic.

Did you know that your child’s inflatable water ball is made of PVC, for example? The very things that always smell so “nice.”

Yet that’s still not all. The various, sometimes strictly secret, sub­­­stances added to plastic products do not just have a carcinogenic effect on the body; they are also endocrine disruptors. This de­notes substances that act like hormones in the body and thus disrupt the endocrine (hormone) system.

Probably the best-known ex­­ample of this kind of “artificial hormone” is Bisphenol A (BPA), which occurs both in PVC as well as in polycarbonates as antioxidant and plasticiser. Approximately 65% of the global production of BPA today is used for polycarbonates. BPA can therefore also appear in your water bottle, baby bottle, plastic tubs and micro­­­­wave containers. As BPA is also used to make epoxy resins (coatings & lacquers), it can also be found in the internal coating of drinks cans and tins, the metal lids of bottles and in the surface coating of wine barrels and tanks for drinking water.

In short, we are—or at least our food is—surrounded by BPA; it has practically become a food ad­ditive. Various factors such as heat, abrasion and damage mean that BPA and other substances are able to escape and get into the body where they act like the natural hormone oestrogen. And this artificial “hormone” oestrogen can knock the body completely out of balance.

The Feminisation of Men

If a pregnant woman exhibits an overly high BPA value (and/or of phtha­­­­­­lates), the unborn baby boy’s production of testosterone may be disrupted. This could lead to a reduction in the distance between the anus and the penis. BPA also affects unborn girls, as well as children and adults. We know, for example, that puberty begins much earlier in girls, while boys and men become “feminised”—for example the penis does not fully develop in puberty, the testicles shrivel and sperm quality is diminished.
Within the last 50 years, sperm production has in fact dropped by 53%.

The most common elective plastic surgery procedure performed on American men is now to remove ‘moobs’ – male breast tissue. At the same time, more and more women are becoming infertile. We demonstrate how omnipresent plastics play their part here. We also explain what ‘plasticised water’ is doing to our waterways. Luckily, there is much that we can do as individuals to hold off – at least in part – this flood of plastics. We provide some helpful tips and tricks and also give you vital information about the most important sorts of plastics and the dangers they pose. From now on, you will understand what the codes and symbols on plastics mean, and  whether or not that piece of packaging in the supermarket really is dangerous (and to what extent).

Find the full text in our Facts are Facts print edition no.12.

Earth is slowly choking on our plastic waste. Read in Globalisation: Overindulging on Wealth about the dangers of globalisation to our planet.