What really makes us happy at work and at home? You’ll be amazed: it’s not money – and that’s a scientific fact!

Would you like to have a chance to play ‘dictator’? And do science a good turn at the same time? In an experiment called the dictator game, participants receive a sum of money, and have to decide how much to give to an unseen co-player. Most of them, quite naturally, keep the money for themselves. If, however, the test subjects are exposed in passing to concepts like ‘divine’ and ‘spirit’ before the game starts, the average donation increases by more than half; most participants are now prepared to do the decent thing and give half of the money away – whether they categorise themselves as religious believers or not. 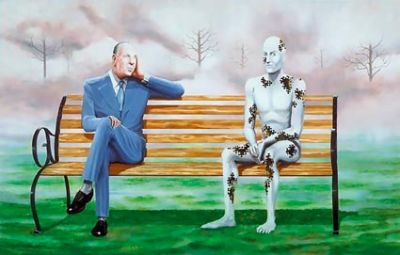 Why? Because, deep inside, people are good. All that’s needed is to remind them of it, or to direct their thoughts towards higher things. And the highest thing we can strive towards is the divine. If our consciousness is directed towards it, this produces a resonance within us, and, so to speak, an attractive force. It then becomes easier for that inherent goodness to manifest itself. This is inherent to every human being, independent of their religion.

Equally inherent to the human condition, however, are those two conflicting forces within our breasts. If we believe we are acting anonymously, then selfishness often seems the best option. Like a small child, most of us need someone watching over us to keep us cooperative and agreeable, as psychological experiments have demonstrated. We need, for example, a ‘Princess Alice’:

University of Belfast psychologist Jesse Bearing led children into a room containing Velcro balls, with a target on the wall. After explaining the rules for throwing the balls at the target, he left the room on a pretext. As might be expected, most of the children couldn’t resist long. As soon as the authority figure was gone, they ran up to the target and stuck them on by hand, slightly off-centre to make it less obvious.

With a second group of children, Bering placed an empty chair in the room, and told them that the “invisible Princess Alice” was sitting there “watching every­­thing that happens in the room.” Under the Princess’ eyes, the children threw the balls according to the rules. Only a few doubters dared to cheat – but only after waving their hands above the empty chair, to make sure that there was really no one there.

This experiment might make you smile, but in fact it clearly demonstrates the destructive effect the lack of faith in a higher power has on our society. Whoever no longer believes in divine authority, no longer feels responsible to it – and sees little or no point in leading a considerate life that takes into account the needs of others. They live instead by the motto: Après moi, le deluge. Living in this manner is only possible because people no longer believe in life after death (let alone reincarnation), falsely believing instead that their unrestrained egotism will be free of consequences.

Basically, we have two choices: selfishness or selflessness. If only selfishness is rewarded, the spiritual is reduced to a farce. Ambition is limited to getting on, winning power, money, respect and status symbols. The pursuit of the highest goals, in terms of character as well as career, previously the guarantor of human progress, is forgotten in the process. No longer do people strive to do things for the benefit of the many, but work solely for themselves. A truly narrow-minded and miserly worldview, leaving no place for honour. Our individuality, our spirit is extinguished as we imperceptibly turn into instinct-driven robots, the puppets of our own desires. The pure selfishness epitomised by the Homo oeconomicus theory that we saw in the previous article ensures it. Yet even when spread across the world by influential organisations like the Tavistock Institute or the RAND Organisation (both tools of the Illuminati1 ), this ideology would never have been able to triumph in the way it has, were it not for the fact that people have abandoned their faith in God.

When Success and Desire Become Dangerous

Too much money ruins your character. This is a fact the Russian researcher Sergei N. Lazarev proved during his research on the human energetic field2 . The more money someone has, the more spiritual and loving, in the most general sense, they have to be, to compensate for the money’s energetic millstone effect. Whoever can manage that, can be happy even loaded down with a fortune. But if we make the pursuit of money an end in itself, it will inevitably poison the soul – with grave consequences extending far beyond this earthly life.

This applies collectively as well as individually. A patient once asked Lazarev his opinion of the Western worldview, which sees success as the highest goal. The bioenergetics researcher answered: “When a society declares human happiness to be the highest goal, it is doomed to fail, in the long run or the short term.”

Lazarev warned him: “So you should consciously remind yourself that any plans for the future you make, any human happiness, should always be simply a means to reach the divine.”

It is perfectly acceptable to have dreams, desires and goals. Yet you should never become obsessed with and dependent on them – especially not when they are of a material nature. Otherwise, you come to resemble a tree with a mighty trunk and a broad crown, but with feeble roots. The first storm that blows into your life will knock you down. Society as a whole won’t be immune to this effect if it loses itself in the hedonistic pursuit of sensual pleasures of all kinds.

Moreover, we become dependent on those who simultaneously encourage and enable our addictions. This happens constantly on the internet, where we are daily confronted with personally tailored offers designed to seduce us into satisfying desires – with nothing more than a mouse click, mind – that hadn’t even existed before we switched on the computer. Since this process also includes the collection, storage and painstaking analysis of our consumer profile and personal data, step-by-step we fall inexorably under the control of Big Brother – who nowadays might more aptly be named ‘Big Data’.

“At the immaterial level, all humanity melts into one,” wrote Lazarev at the turn of the millennium. “That means that if the emotions of all humans were chaotic in regard to each other before, from 2002 they will be joined in a unified direction. If this direction proves to be wrong, i.e. if it forms a counterweight to natural law, it can cause a blockage that manifests itself in a series of natural disasters, epidemics, and conflicts.”

The Earth is forced to discharge the destructive potential of our misguided human energies in exactly the same way that lightning removes tension from the air. This also means that, to a certain extent, we ourselves control how badly we are affected by natural disasters. The simple solution is to direct our attention once again toward the divine and to live in accordance with it. That’s why Lazarev softened his dark prophecy with the words: “If you turn towards God and love, the future changes and such predictions lose their validity.”

Is it really true that to attract the best managers, you have to pay them the
multi-million salaries common on the international marketplace? And how do you know who the ‘best’ managers are in the first place? Are they the ones who promise shareholders the greatest possible profit maximisation – the ones who are prepared to sacrifice their last flickers of humanity on the altar of shareholder value to achieve that goal?

What the voice of plain old common sense has long been telling us is now being backed up by more and more economists: only an appropriate, but not excessive, pay packet can attract the best, most decent managers – the ones who want to do the job for the love of the work itself, and not just for the money. People who consciously reject the highest financial offer are demonstrating a certain measure of idealism. Following on from that, they also feel more responsibility to their workers and to society at large. These are exactly the kinds of people who can lead a business to success in the long-term, without leaving a trail of destruction in their wake.

What about the additional financial incentives – the perks (material benefits) and the bonuses (yet more money) – that are designed to spur us on nowadays? You may be surprised: the latest research shows that ‘payment by results’ doesn’t work! For example, a study conducted on four thousand family businesses showed that it had a terrible effect on the working atmosphere – and hence the companies’ long-term prospects. If, figuratively speaking, you start waving a wad of cash in the workers’ faces, then that’s not going to do much for a company culture based on higher values. Any feeling of camaraderie based on respect and professional appreciation will be lost. Personal engagement, enjoying your work, loyalty – none of these count anymore, only results that can be measured.

Everyone Wants to Develop

The business coach Alois Manfred Maier described the law of motivation in his book Schöpferisches Management (‘Creative Management’): “Motivation does have a source. But simply increasing pay packets doesn’t increase motivation. Workers will be motivated, committed and loyal if they can identify with the business, if their efforts are acknowl-edged and if they enjoy their work.” In summary: As long as someone has the chance to develop, they will be motivated.

That doesn’t mean that an additional and appropriate financial incentive needs to be done away with, you might think. What harm can it do? Swiss economist Bruno Frey, Professor of Behavioural Science at Warwick Business School, sees it quite differently: “People are prepared to do a lot of their own accord, without needing to be paid for it. A worker who enjoys his work is concerned simply with making sure everything runs smoothly. To do that, they are prepared to work more perfectly voluntarily.” This voluntary inner motivation is known as intrinsic motivation. Its opposite is extrinsic – motivation from the outside, rather than from an inner drive. “Extrinsically motivated workers, on the contrary, only work more when they are paid for it,” continued Frey. “Their motivation is directly linked to monetary compensation. It is commonly assumed that both forms of motivation can simply be added together, and that performance related pay increases motivation. That’s dangerously wide of the mark. Performance related pay lowers, or even completely nullifies, intrinsic motivation.”

So, science once again confirms Jesus’ warning from 2,000 years ago: it really is impossible to serve two masters at the same time. The temptation of external values, the seduction by the material, destroys the inner contentment that can only grow in service to and sacrifice for a higher goal. Whoever has eyes only for money has lost sight of this service, and made a Faustian bargain to sell their soul to the Devil.

For there is one thing we must never forget: we humans are spiritual beings on an earthly journey. Buried deep in our souls, our longing for the highest wants to spread out its wings, to learn to fly, as it were, like Jonathan Livingston Seagull. Antoine de Saint-Exupéry expressed this feeling in his own poetic manner: “If you want to build a ship, don’t drum up people together to collect wood and don’t assign them tasks and work, but rather teach them to long for the endless immensity of the sea.”

This whole article was published in Facts are Facts print edition no.15.