Looking for: Love that Lasts

We can send space probes through the solar system, but we have forgotten how to keep love alive. The reason can be found in the very place where the probes are headed: in the sun, the source of divine love. Whoever blocks this source prevents earthly love from succeeding. This is more than just ‘religious’ doctrine: it’s a fact, recently proven in the discipline of field energetics. Read on to find out how you can breathe new life into love – and keep ‘divorce’ a foreign concept. 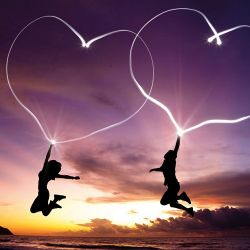 How deep is your love? Do you love your spouse and your children, but keep the rest of the world at a distance? Do you love your entire family, including your grandparents and all your aunts and uncles, but couldn’t give a damn about anyone else? Does your love include your fellow countrymen, your car, your garden, and your dog? Or is your love boundless, extending to even the smallest things? Do you love everything that you can see and touch, even the things that you know exist, even though they lie beyond the bounds of everyday perception? And do you even love the things that don’t belong to the lighter side of life – trips to the dentist, wasps at a picnic, tax returns? If you’ve reached that point, then it’s possible to say with certainty that your capacity for love has reached divine proportions; that is to say, love pours forth constantly from your being, and even things like dentists, wasps, and tax returns can’t slow down the flow, let alone check it. You can look forward with confidence to a happy, healthy, and fulfilling life. However, the narrower the focus of our love, the more dangerous life becomes.

Now admittedly, compared to the dull, coarse people of the Middle Ages, we are all love-crazed and super-sensitive. In general, Western man’s capacity for love has increased enormously. This has a lot to do with the fact that, contrary to the way things sometimes seem, the world is becoming a brighter place, and we are in the “Nearer, my God, to Thee” phase – leaving few hearts completely untouched. Nevertheless, there are still parts of the world that haven’t moved out of the Middle Ages, where the masses will walk over corpses to look after number one. This is because an excess of life streams are now incorporating, in order to hopefully be carried part of the way by the tide that is lifting us all upward. That is to say, many who spent a long time hunkered down in the dark regions of the Beyond have now appeared, and life for them is no piece of cake (as befits people with their karma). For us, on the other hand, every day is Another Day in Paradise, like the song Phil Collins dedicated to the homeless. Do we recognise that? Do we value it? Of course, we can only do so when paradise blossoms inside of us too. If our inner being is a wasteland, then we will feel as ill at ease even in the paradise of the outside world as we would do arriving at a party dressed for a funeral. But how do we turn our inner world into a paradise?

For most people, the closest they get to paradise is when they are most deeply in love. It’s as if the sweetness of heaven descends upon you – everything glows, shines, gleams. Every single cell longs, sighs, and celebrates as soon as the object of their affection is present. What used to be a tiresome chore becomes enchanted ecstasy, transformed by the magic of love – train journeys in packed carriages, the daily grind at work, doing the housework. The person who conjures up this state of ecstasy becomes a dream figure who you want to grab hold of and never ever give up. So you get married – and then, ever so slowly, everyday reality creeps back in. The prince turns into a frog, ecstasy turns into sobriety, choice turns into obligation. Perhaps a baby comes along, perhaps two, and they don’t bring that state of intoxication back; au contraire, after four or five years, the relationship has run out of steam. Hence the divorce application: “Unfortunately love disappeared and friendship was the only thing left.” So the couple drifted apart; the partner just wasn’t serving as the fuel for those emotional highs anymore. The trend in divorce rates demonstrates, unfortunately, that this cliché is all too real. In 1960, the divorce rate in Germany was still under 10%. By 1970, it had reached 17.2%, by 1990, 30%, exceeding the 50% mark in 2007. The majority of marriages were falling victim to so-called ‘irretrievable breakdown’.

These couples have simply forgotten where love comes from, where it goes – and how to stop it getting away.

To begin at the beginning: the state of being in love could be compared with courtship in animals, serving more or less the same purpose i.e. the production of the next generation. That is to say, if men and women didn’t fall head over heels for another person, the wish to have children would be difficult to instil. The only thing that can drive us to exchange our freedom for the bond of marriage, wild nights for feeding and nappy-changing, is this turbulent, hormone-fuelled rush. It really doesn’t have much to do with love. In the best case it is destiny: let’s not kid ourselves, the person to be married in this incarnation is predestined for their partner. It is their duty and obligation to march up the aisle only when they feel that they have met Mister or Miss Right.

Yet now all Mister and Mrs Right do is sit on their sofa in front of their giant flat-screen TV (with Dolby Surround), bored. Is that all life has to offer? No pleasant tingles, no dreams, certainly no soaring emotions? Passion that paves the way for an existence that is mostly suffering, that lets inner happiness fade into a mirage? It’s not surprising that many people feel cheated (even without actually being cheated on) and come to believe that earthly happiness consists solely of chasing after money and status symbols. Which eventually become stale and worn out too. Next follows another ‘love story’ for a couple of years, only this time with the added burden of childcare and child-support payments.

For all that, a love marriage is a luxury of relatively recent date. For centuries, marriages were joined for reasons of convenience and inheritance. Producing the next generation was more a tiresome burden than a source of exhilarating happiness. Can it be that a love marriage is actually no more successful than a completely passionless marriage of convenience? Or to put it another way: what is going wrong in the haven of marriage – which nowadays is more often a storm in a port than a port in a storm?

At present, from Russian energy field researcher Sergey N. Lazarev’s1 point of view, the future of the institution of marriage does indeed seem bleak. And for one reason: because although Westerners have expanded their emotional world over the last two hundred years, their love and adoration of God has waned. Since we are Gods in embryo, all carrying the divine spark in our hearts, we forget our divine origins when we cut ourselves off from the source of love. Because love comes from God. No one can ‘make’ love, least of all between the sheets. It surrounds us in every single electron, making up the seen as well as the unseen Creation. All we need to do is recognise its presence and, full of gratitude and appreciation (indeed, perhaps even with inner adoration), accept it within ourselves and let it flow onto whatever we choose. And once we have tapped into this spring of love, we will realise that it can’t stop at our close or even extended family, or indeed country, but that it must flow freely; that it wants to envelop everything in its warmth and light.

End of extract „Looking for: Love that Lasts“

In the full, ten-page magazine article you will learn how the latest findings in energy field research provide confirmation of the great world religions. At the same time, we shine a light on such topics as 'No future without God', 'Morality is vital for our survival', 'The mistake can only be found in you', 'The power of forgiveness', 'The right way to deal with children', 'Honour your parents', 'Nothing is possible without women', ‘Of 'sin' and infertility’ ,as well as 'Rebirth or death'. What you are going to read in this uplifting piece will change how you look at the world – and be a valuable aid in not just finding true love, but above all in keeping it strong. You can read the complete article in the Facts are Facts print edition no.16.

This article appears in Facts are Facts No. 16