James the Just was not only Jesus’ younger brother, but also his successor as leader of the first Christians. If Christianity had built its church on this rock, the world would be a different place today. Read here the forgotten story of a man whose memory was deliberately erased by the Church.

The disciples said to Jesus, “We know that you are going to leave us. Who will be our leader?” Jesus said unto them, “In the place where you are to go, go to James the Just, for whose sake Heaven and Earth came into existence.”

The Gospel of Thomas (Logion 12)

Professor André Lemaire from the Sorbonne University in Paris was speechless, not to mention shocked. The world-renowned expert in 2,000-year-old Aramaic hieroglyphics was in Israel for a few months doing research where he had met with private antiquities collectors several times. One of them wanted to show the scholar something: a mini sarcophagus made of sandstone, not much longer than 50 centimetres (20 inches). Around the beginning of the Christian era, the Jews used coffins like these for a second burial of the deceased, who had already been allowed to rest laid out in a burial cave for one year. Once the body had decomposed to the bare skeleton, the bones would be lovingly gathered up and interred in a small stone casket, which is known as an ossuary.1

This alone was not enough to excite an archaeologist, since thousands of bone-boxes such as this had previously been found in the area around Jerusalem. What made antiquities researcher Lemaire’s eyes pop was not the ossuary itself, but the engraved writing. “I was stunned,” he later recounted. “You can read it quite easily: James, son of Joseph, brother of Jesus.” 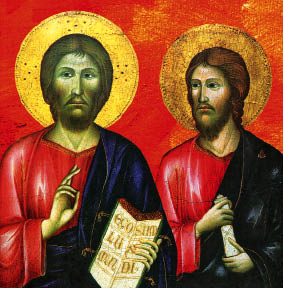 Not accidentally portrayed as twins: Jesus (left) and his brother, James the Just.

When this artefact (today known as the James Ossuary) was presented to the world in autumn 2002, the news exploded like a bomb. Professor Robert Eisenman from California State University, who has written a 1,000+ page tome on James, the Brother of Jesus,2 expressed what many researchers were thinking: “If it’s authentic, it’s the discovery of the millennium, maybe even the most important find of the last two thousand years—this inscription proves that Jesus existed in the first century.” For what has been a fact for thousands of years for (approximately) 2.26 million faithful throughout the world, still draws the scholarly world into doubt: Did Jesus really exist?

The ossuary would be their first direct archaeological proof of the reality of the person Jesus. With such an important historical discovery, there was certainly no lack of doubting voices, voices that spoke of forgery. André Lemaire counters: “The shape of the letters and the grammar were legitimate. The inscription was ancient, not modern, obviously authentic.” Most scholars and all scientific test results that are available to the public confirm the authenticity of the inscription. Nevertheless, not everyone is convinced. In Israel there has even been an ongoing trial that started five years ago and whose verdict is due any time.

But the focus here is more on James and less on Jesus. While the ‘scholars’ are still arguing over Jesus’ existence, faithful Christians might be more shocked by the claim that their ‘Saviour and Redeemer’ supposedly had a natural brother.

The ‘Mother of God’ had other children?! That is approaching blasphemy, since Catholic and Orthodox Christians must believe in the doctrine of “Mary’s perpetual virginity”. A claim that was first put out into the world by the ‘Church Father’ Jerome (347-419), four hundred years after Jesus’ death. He even ascribed life-long chastity to Joseph. It was only much later, in response to the Reformation, that the Roman Church declared the dogma of Mary's perpetual virginity. This obviously contradicts the historical facts, which is why the evangelists and authors of other early Christian works completely naturally refer not only to Jesus’ brother, but a whole band of siblings! Mary and Joseph had at least seven children of their own, the names of which are listed by the evangelist Mark (Mark 6:1-3). Moreover, Luke writes that Jesus was Mary’s firstborn (Luke 2:7).

We will explore which feeble tricks the Church used to explain these facts away, why Jesus cannot have been conceived by the Holy Ghost, and what this all has to do with celibacy in a later edition of Facts are Facts.

Like Joseph and even Jesus, James (Ya’akov) was a very common name at that time. Even among the apostles there were two bearing this name: James, the son of Zebedee and brother of John, is today honoured as James the Greater, whose mortal remains lay in the northern Spanish pilgrimage site Santiago de Compostela. Then there was James, the son of Alphaeus, whom the scriptures refer to as James the Younger or James the Less.

It is no coincidence that this ‘lesser’ James is often confused with James, the Lord’s Brother, who, however, was not a member of the original disciples. Everything that portrayed James the Just, as his contemporaries called him, in a bad or insignificant light suited the Church just fine. Which is why they were never really interested in clarifying such fallacies.

The princes of the church would have preferred to erase the admonishing nuisance and painful thorn in the flesh of their orthodox doctrine from the annals of history altogether—but that was not possible; his influence on budding Christianity had been too powerful. It is probably for this reason that James appears relatively infrequently in the New Testament, considering the authority that he actually possessed. Luke, for example, never mentions him in his gospel. This stands to reason, for Luke was also a great admirer and student of Paul, whose theology of salvation (“only faith in the Saviour Jesus Christ can set us free”) was diametrically opposed to James’ teachings (“faith without good works is dead”).

And something else stands out: neither in the Acts of the Apostles nor in the Gospels nor Pauls’ letters is James ever introduced to the reader. Everywhere he is simply… James. The reason, and all scholars are in agreement here, is easily found: James was so well known to the people of his time that every introduction of his person would have been completely superfluous.

If we look beyond the Bible and study the early Christian literature, the person of James shines in a much brighter light. The Church father Clement of Alexandria (150-215) writes, for example, in his work Hypotyposes (Outlines): “After the Saviour’s ascension, neither Peter nor James (the son of Zebedee) nor John claimed primacy (although they were especially recognised by the Saviour), since they elected James the Just to be bishop of Jerusalem.”

Even though James certainly didn’t hold the title of Bishop, it will nevertheless be made clear that he led the original congregation in Jerusalem. In this, we have clear proof that it was not Peter at all, but James who was the direct successor to his older brother and it is he who therefore must be considered as the first “Pope”. What is more, Peter had denied his Lord and as a result he fell into God’s disfavour, as Jesus had warned the disciples would happen (see pg. 53).

Epiphanius and other Church fathers also confirm James’ spiritual authority. And Eusebius, the bishop of Caesarea (c. 260-340) and commonly accepted “father of Church history”, even goes so far as to write that James was the first to “sit on the Episcopal throne of the Jerusalem Church.”

Notice that with such wording, we can see that already three or four hundred years after Jesus’ mission the desire for worldly power had crept in: power such as a monarch deserves, but not a spiritual leader.

And whoever calls the shots in Jerusalem also radiates his authority into the far-spread Christian congregations such as Antioch, Ephesus, Corinth, or Rome. Jerusalem was the place where Jesus taught and was crucified. It was the seat of the Apostle’s Council (led by James), the Mother Church and it was the epicentre of a new spiritual current that was about to conquer the world.

Ancient scriptures such as the Apocryphon of James or the First and Second Apocalypse of James confirm something that also appears in the Gospel of Thomas:3 It was Jesus himself who appointed his brother James as his only successor. He was also the one who gave the Apostles their missionary assignments after Jesus’ crucifixion and decided that he himself would go to Jerusalem to build up the Mother Church. The Second Apocalypse even refers to James as the “Guardian of Heaven’s Gate,” which of course reminds us of the role traditionally assigned to Peter at the Pearly Gates. And whoever enters through this gate, according to the Second Apocalypse, not only belongs to Jesus, but also to James. It makes sense, then, that this apocryphal writing calls the “Brother of the Lord” also an “Illuminator and Saviour”, “he whom the heavens bless”.

The term “beloved” was a very common designation with a clear meaning. By repeatedly referring to his brother as “beloved”, Jesus was clearly indicating that he had selected James to be his spiritual heir and successor.

In light of this information, it becomes clear why Peter, after his escape from prison, first wants to inform “James and the brothers” (Acts 12:17). And also Paul, who, upon his return to Jerusalem after a three-year missionary journey, reports in a letter that, aside from Peter, he had seen “no other apostle apart from James, the Lord’s brother” (Gal 1:19).

Next we look at how James the Just is depicted in the Bible and why in the Gospel of Thomas, discovered fifty years ago in the Egyptian town of Nag Hamadi, the following is written of him: “for whose sake Heaven and Earth came into existence”. Unlike Paul, James taught that Man could only redeem himself by performing good deeds. We look at what Jesus’ brother once wrote, and thereby shed light on Jesus the Christ’s actual “redeeming act” in this context. What Paul and the Christian Church made of this no longer bears any relation to the truth. In the full text you will also read about James’ cruel end and why many of his contemporaries associated the decline of Jerusalem with his martyr’s death. Find the article in our Facts are Facts print edition no.9.

Read here a critical analysis of Simon Peter, the patron saint of Christianity in general and the Roman Church in particular: Simon Peter: Built on the Wrong Rock

Reincarnation: What do rebirth, reincarnation, resurrection and Christ Consciousness really mean? You'll find a revolutionary clarification of age-old terms here: Reincarnation Is Not Being Born Again!

In the year 553 A.D., 165 Church officials condemned reincarnation. Prior to that time, it had been a fundamental Christian teaching: following the trail of a conspiracy that changed the world. Find out more here: Reincarnation: The Church's Biggest Lie