Energy saving bulbs – no thank you!

“Don’t believe any statistics that you haven’t falsified yourself!” You don’t have to smuggle in false data these days to draw false conclusions – just don’t bother considering all the aspects. Official figures and arguments regarding energy saving light bulbs and the light bulb ban are no exception here.

A short-lived potential for saving 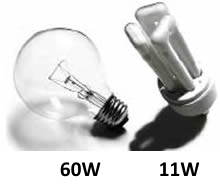 Same light – 1/5 consumption This calculation by advocates of energy saving bulbs is way off.

“Save the climate” was the slogan with which Greenpeace smashed ten thousand bulbs in front of the Brandenburg Gate in Berlin two years ago. Just a few weeks later in May 2007, Greenpeace Switzerland wanted to save the equivalent of output from the Gösgen II nuclear power plant by consequently using energy saving bulbs – at least 14 percent of Swiss energy consumption. In Germany, the Federal Environment Ministry calculates that energy saving bulbs would save 22 billion kilowatt hours of electricity, which would correspond to a carbon dioxide emission of 1.8 million medium-sized vehicles as one could shut down one or two smaller coal-burning power stations. Sounds unbelievably good – even when you know that the official greenhouse gas theory and resulting hysteria about CO2 is not wholly beyond doubt.1 Despite such grandiose assurances, the amount of electricity saved – used to justify the EU’s incandescent bulb ban – still officially only totals four percent. Michael Kaufmann, deputy director at the Swiss Federal Office for Energy, explained in an interview on 25 November 2008 that replacing all incandescent bulbs with energy saving bulbs “yields one to two percent” and admitted that this is “actually little”.

If you check again, the figures tumble even further like prices in the sales. Thus one can glean from the October 2008 issue of testing magazine Öko-Test that the lifespan of energy saving bulbs and the amount of electricity they save are considerably smaller than as stated by the industry. “Energy saving bulbs never use 80 percent less than customary light sources,” explained Gabriele Achstetter from Öko-Test in the Süddeutsche Zeitung. “There is even a model that needs more electricity for the same luminance as traditional bulbs.”

Even if energy bulbs could theoretically save about one percent on total electricity consumption, it would be a totally different story in practice: in contrast to incandescent bulbs, an energy saving light bulb actually responds badly to frequent switching on and off, through which action its life duration is massively shortened. So what are we to do, then? Whereas in past we would briefly switch off the (incandescent) light when leaving a room, would we now not simply leave the (energy saving) light burning? Energy saving bulbs tempt us into wasteful illumination without a guilty conscience. Save electricity? No need anymore.

Ordinary incandescent bulbs are accused of emitting most of their energy in heat, not light – which is true. This energy is, however, not lost in all cases (as is suggested to consumers). When do we actually need the most artificial light? Exactly: the winter half of the year, which is of course also when we put the heating on. The warmth of incandescent light bulbs comes in handy here, as it helps to save on heating costs with correct space heating regulations.

If one factors in such points in the figure juggling, just one percent – generously calculated – of the actual electricity consumption remains from the boastfully-promoted eighty-percent saving on electricity (relating to incandescent bulbs).

The eco-balance of energy saving light bulbs is also worse than generally described. For one thing, they expire on average much quicker than is noted on the packing by their manufacturers. This is why high transport and manufacturing costs (almost all energy saving light bulbs are produced in China, which is not exactly known for its environmental protection) are more significant than is officially recognised in the tidied-up figures. In the long run, all of this uses up energy, even if it is so-called “grey” energy, as it is forgotten by most. 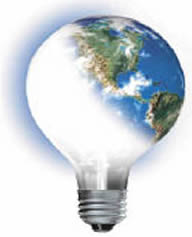 Secondly, energy saving light bulbs become toxic waste after their demise. Simply throwing them in the rubbish like we did with incandescent bulbs poisons the atmosphere with mercury – which unfortunately is the norm. Nine out of ten energy saving light bulbs in Germany still end up in the household garbage, instead of being disposed of properly. However, handing them over at the collection point all broken up is equally bad, incidentally.

At the same time as the EU is touting energy saving bulbs containing mercury as environmentally friendly, they are also banning the sale of thermometers containing this same element from April 2009. To protect Nature…

Used incandescent bulbs, on the other hand, do not poison the environment. Neither do they need to be transported over vast expanses of the earth (which costs energy) in order to undergo costly recycling (which also costs energy).

Lots of electrosmog – and then some!

When the Wolfram filament emitted its warm light in residential dwellings, the world of electricity supply was still in order. Today, modern energy saving light bulbs are making the experts sweat. Fluorescent lights such as energy saving light bulbs feature built-in electronic ballasts, which strain the electricity network with their backlash. In extreme cases, conductors can be overloaded, and transformers overheated. In older home electrical installations, such discharge lamps can cause fault currents, which not only disturb data transfer (cable TV, networks), but also lead to an even greater corrosion of the wire installation.

In addition, fluorescent lamps cause an awful lot of electrosmog. The number of people in close proximity to energy saving light bulbs who struggle to concentrate, suffer headaches, dizziness and worse is becoming ever greater. This is not surprising: like the incandescent filament light bulb, the energy saving light bulb generates low-frequency 50 Hz electromagnetic fields (a consequence of alternating current), but to a much stronger extent. The electronic power supply unit integrated into the bulb socket converts this main frequency into up to 40,000 Hz, which in turn pulses with a frequency of 100 Hz – pretty similar to the radiation of a DECT cordless telephone. “Every energy saving light is actually a small radio transmitter, which sends out an aggressively modulated, high harmonic 100 Hz tone,” warns consumer protection organization Bürgerwelle Schweiz. “You can test this yourself with any long wave radio.”

A study commissioned in 2004 by the two Swiss Federal Offices for Energy and Health came to the conclusion that “energy saving light bulbs are hardly worse than incandescent bulbs in terms of electro-magnetic radiation, and are comparable with other everyday appliances.” It also stated that the strict TCO guideline values were mostly maintained. How can that be possible? The answer is simple: instead of the mandatory saucer-shaped TCO measuring probe, a rod antenna one metre long was used. Every technician in measurement technology knows, however, that rod antennae are completely unsuitable for measuring dot-shaped electro-magnetic fields. Hence the fact that this study was able to come up with readings a hundredfold smaller!

So should the finger be pointed at the incompetence of the experts involved – or firmly at its investors? Interestingly, this study was mainly financed by mobile network operators and the Nokia Group, as well as light appliance manufacturers Osram and Philips.

End of complete article „Energy saving bulbs – no thank you!“

Learn how fluorescent light from energy saving bulbs, fluorescent lamps and computer flatscreens harms our eyes and health. The most recent scientific results are also brought together here: The Light Bulb must not go out!

Don’t miss our interview with light biologist and doctor Alexander Wunsch, who urgently warns of the danger of blue mercury light and explains how it is radiated by energy saving bulbs and flatscreens: Energy Saving Light Bulbs can make you ill!

All full-length articles can be found in Facts are Facts print edition no.3.