Modern wheat is cheap and high-yield. Genetically-speaking, it has little in common with the strains cultivated just 50 years ago, not to mention wild varieties. Thanks to high-output wheat, we can get muffins and rolls in XXL packs – but it’s becoming increasingly evident that we are baking ourselves into an early grave.

Did you know that in the USA, male (!) breast reduction operations are now among the most popular forms of plastic surgery? “Those Yanks just eat junk food,” you might say, reflecting the general European prejudice against Americans. Yet Europeans – indeed, Westerners as a whole – are not doing any better. Just like over the pond, everyone here struggles to make sure that their shirts and skirts still fit from one year to the next. Despite gyms being jam-packed, despite artificial sweeteners and wholemeal bread, people are simply getting fatter and fatter. Did their parents or grandparents go jogging, or to regular Pilates classes at the age of 30 or 40? Of course not. Where, then, can we find the villain responsible for this ‘Battle of the Bulge’? 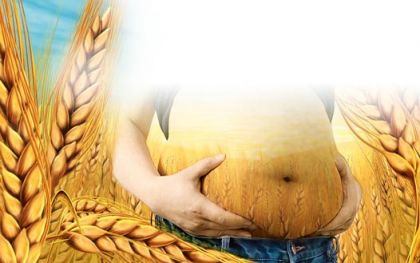 One man who believes he knows the answer is American preventive cardiologist William Davis of Milwaukee, Wisconsin. By ignoring the recommendations of traditional nutritional experts, he has been able to help thousands of patients get rid of moobs and muffin tops, as well as heart and skin problems, arthritis, heartburn, and many other ‘diseases of civilisation’. His advice is simple: “Stop eating wheat.”

The first reaction is usually shocked disbelief. After all, wheat is a staple food! It’s impossible that wheat could be the cause of all these problems. It’s a fact that wheat is the most commonly consumed cereal in the world. In Germany, the ratio of wheat consumption to other cereals is 7:1, and the trend is rising. Worldwide, wheat provides more than 20 per cent of total calories consumed. It’s just that what we call wheat today has very little to do with the wheat that existed 40 or 50 years ago.

The ancestor of modern wheat is einkorn, a wild grass with 14 chromosomes. Einkorn was tough and cold-resis-tant, and as a result it was one of the first types of cereal to be cultivated in Europe, in around 3300BC. Ötzi the Iceman ate einkorn! Shortly after cultivation began, crossbreeding with an unrelated species of wild grass produced emmer. Emmer has 28 chromosomes, that is, twice 14 - plants such as wheat are capable of storing the total number of genes of their ancestors. If einkorn and Aegilops speltoides (the scientific name of the second wild grass) had mixed their genes, as higher species like animals and humans do, then emmer too would have had 14 genes. But, as noted, plants retain the sum total of genes. Despite low yields and poor baking
characteristics, einkorn and emmer have remained well-loved staples for thousands of years.

It was only at some point during the millennium before Christ’s birth that emmer naturally hybridised with another wild grass, creating the first common (or bread) wheat. It contained 42 chromosomes, i.e. the genes from three different plant species, making it truly genetically complex right from the beginning. This first soft wheat (Triticum aestivum) was the closest to what we now call wheat. Since common wheat was much higher-yielding than its ‘parents’, einkorn and emmer, and was much easier to process, it soon replaced these original strains. Yet for many centuries this soft wheat too remained practically unchanged, even as its cultivation spread to ever further-flung parts of the world. Ultimately, Christopher Columbus brought it to America as well.

Over time, breeding produced new strains of wheat such as durum wheat (used to make pasta), and the delicate strains used to produce baking flour. Although wheat was in a continuous state of development, it was nevertheless a long drawn-out evolution taking hundreds of years.

This all changed in the 1960s and 70s. After the Second World War, the race was on to develop strains with ever higher yields, which if possible should also be resistant to disease and adverse weather conditions. The driving force behind this was the International Wheat and Maize Improvement Center (IWMIC) in Mexico. They succeeded in creating an incredibly productive dwarf strain that grew to only 30cm to 60cm. Thanks to this high-yield wheat, harvests in China (for example) increased by a factor of eight between 1961 and 1999. In North America, the yield per hectare is now ten times greater than it was a century ago. Critical voices, advising caution in the midst of this breeding euphoria, were soon silenced by the argument that this was the only way to fight world hunger. And, with such spectacular harvests, that was hard to deny.

Hybridising wheat requires techniques like the introduction of genes, or backcrossing seeds with prior generations or other varieties of wheat or grass. To be clear, this is not genetic engineering (which involves much more extreme manipulation of the plants’ genetic material), though the line between GM and hybrid wheat is a thin one, since this too, at least potentially, is capable of switching particular genes on and off. The high-yield wheat that makes up 99 per cent of global cultivation was developed during breeding experiments conducted over the last 50 years.

As frenzied attempts took place to develop ever more productive strains, thousands of new varieties were produced within a short space of time. These landed in the hands of farmers completely untested. No one asked whether these modern strains of wheat might pose problems for humans whose organisms, you might say, remained in the Stone Age. In any case, for these new wheat varieties themselves, the changes caused by hybridisation have been quasi deadly: the new strains are incapable of surviving without human intervention in the form of pesticides and nitrate fertilisers, and would die in the wild. (Something that of course does no harm at all to agribusinesses such as Monsanto, Cargill and ADM, which produce seeds and fertilisers.).

When analysing the proteins in hybrid wheat, it becomes clear that its genes correspond 95 per cent to those of its parents. Five per cent, however, are unique, being found in neither progenitor! Here, it is primarily the wheat’s gluten proteins that undergo the greatest changes due to hybridisation. It has also been shown that in comparison with varieties that are hundreds of years old, the new wheats contain more genes for the gluten proteins that have been linked to coeliac disease. If you multiply these changes by the tens of thousands of hybridisations to which wheat has been subjected, then the significant potential for drastic changes to genetically determined characteristics like the gluten structure soon becomes apparent. Once again, man is playing sorcerer’s apprentice. As if nature were a box of Lego, he takes things apart and puts them back together again without even knowing what he really has in his hands. Since no testing was undertaken during all these hybridisation experiments to determine what effects the new varieties might have on the human body, it is no longer possible to determine at which point wheat began to demonstrate health-damaging properties. Up to the present time, it has also proven impossible to determine whether these properties are the same in all hybrid varieties, or only some of them. Still, there is now enough evidence to suggest that a warning sign should be attached to your morning toast: ‘Eating bread may damage your health.’

In the full article you will also find out why whole grains can sometimes make you ill, and the facts about the visceral fat in our abdomens. Did you know that our brains would prefer to do without wheat? But what should we eat instead? Find out here.