Did foreign spy software end up on the computers of US aeronautical authorities – and is it technically possible to control passenger airliners remotely from the ground? The answers shed an ominous new light on the terrorist attacks of September 11, 2001. 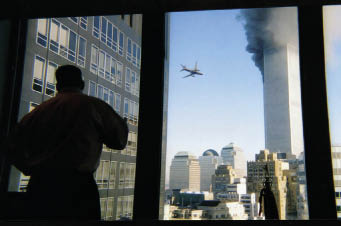 Young boys get a real kick out of flying remote control model airplanes. But when ruthless, grown men do the same with real airplanes, the results are truly catastrophic. September 11, 2001 bears witness. Investigative journalist Christopher Bollyn1 has assembled a wealth of publicly accessible facts that when connected form a grim picture.

The most powerful nation on earth exhibits a sensitive Achilles’ heal, although military and government agencies have the most advanced and best computer systems at their disposal – or maybe that’s the problem. You’d think that the USA would only allow a few specialists of their own to develop programs for the digital networks in this highly sensitive area. But that is not the case. An inconspicuous, foreign held company wrote key software, for example, for the most important government agencies. In doing so, they covertly provided the opportunity for critical computer networks to be manipulated unnoticed1 – which would explain why the Federal Aviation Administration (FAA) failed miserably in the monitoring of airspace on that tragic morning.

The small software company Ptech from Quincy, Massachusetts fell under the scrutiny of independent truth seekers shortly after the terrorist attacks. Indira Singh, then a senior consultant with JP Morgan Chase, described Ptech with the following words: “Their specific job is to look at interoperability issues the FAA had with NORAD and the Air Force in the case of an emergency. If anyone was in a position to know about the FAA – that there was a window of opportunity or to insert software or to change anything – it would have been Ptech.”

In a radio interview in 2005, Singh said that Ptech’s software “is utilized at the highest levels of almost every government and military and defense organization in this country, including the Secret Service, the FBI, the Department of Defense, the House of Representatives, the Treasury Department, the IRS, the U.S. Navy, the U.S. Air Force, and, last but not least, the Federal Aviation Administration.” For Indira Singh, Ptech is “the one golden thread you pull on and all of this is unraveled,” because the connections of this firm are like tentacles that reach into all government circles and private industries.

The true tenures of Ptech are unclear. Indira Singh distributed among 9/11 skeptics that the company has close ties to Saudi Arabia or even Islamic extremists. Christopher Bollyn, who knows the Zionist influence on Washington all too well, isn’t so quick to believe this. To him this seemed like the wrong scent to be following and he started to conduct some research of his own. “I soon discovered that the real key person involved in the development of the company was a Zionist Jewish lawyer named Michael Goff. Goff’s father and grandfather had been high-level Masons in the Worcester lodge of B’nai B’rith.” Because Michael Goff had already worked for an Israeli computer security company before he took over leadership of Ptech, it seemed obvious to Bollyn that in reality Ptech was not controlled by Lebanese investors, but rather by Mossad, the Israeli intelligence service.

The fact remains, however, that the Air Force executed a drill on the morning of September 11, 2001 in the New York area. Fighter jets were already in the air. Regardless, the captured passenger airliners, or their “look-alikes,” crashed into their targets unopposed because the control system of the FAA failed and the Air Force was alerted too late. In one case, over thirty minutes lapsed upon the abnormal interruption of radio contact with the airplane until the military was finally notified! But it was already too late then, as we all know. When the FAA was forced by way of court order to relinquish its documents to the official 9/11-investigation commission, over 150,000 documents were missing according to newspaper reports – all of the information that could have brought light to the exact chronology of events (or better, delays) on that fateful morning.

Over the course of his research, Christopher Bollyn stumbled upon even more strange coincidences. Some concerned Monte Belger, Acting Deputy Administrator of the FAA from 1997 to 2002. In this capacity, Belger promoted the modernization of all computer systems in his agency and was directly responsible for the installation of the software developed by Ptech – software that Bollyn is convinced was embedded with covert Israeli spyware. The nature of the private sector company to which Belger transferred upon leaving his government position in 2002 might then seem like more than mere coincidence. U.S. Aviation Technology, with headquarters in Fort Lauderdale, hired Monte Belger as “Vice-President, Government Connection.”

This full article investigates the US company that publicly advertises its ability to control large passenger planes remotely – and who exactly is behind this company. Some missing pieces of the puzzle fall into place here, revealing a very unsettling picture.

Also read why Italy’s ex-president Francesco Cossiga stated publicly that the attacks of 9/11 had been “planned by the CIA and Mossad”. A claim that is even more explosive because it was made by the very politician who was himself closely linked to the secret state NATO terror group “Gladio”. Don’t miss our article about what really happened on 11 September 2001: 9/11: The Conspiracy behind the Conspiracy