People have worshipped the sun as a deity since time immemorial, and rightly so. It is what maintains our biosphere on Mother Earth, giving us life and nourishing this life afresh every day. Both humans and animals have always understood their dependence on the sun and have used its healing rays at every opportunity. It wasn’t until our “highly civilized” world that almost everyone began suffering from a considerable deficiency in the sun’s Vitamin D, with serious consequences for body and mind. 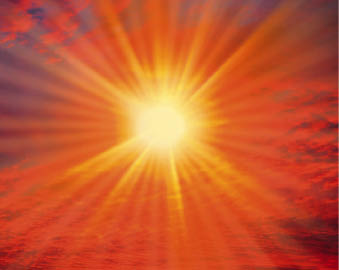 These days, people are barely aware of natural health: their lifestyles are alien, unworkable, and they try to overcome problems by popping pills. One of the worst recent attitudes—as advised by conventional health experts—is to stay out of the sun for fear of skin cancer.

Every day it becomes clearer that something is going very wrong here and that we urgently need public health to be “healed”. For as long as we continue to receive imprudent external advice that leads us away from the basic foundations of life, we should turn our attention to our own bodies and search for the right answers and paths within. Then we’ll strike it rich!

Until now, Vitamin D deficiency was predominantly associated with rickets (bone softening in children), also known in German as “the English disease”—so called because it affected a large number of children growing up in the dark back streets of English cities, who simply lacked sunlight.

Presently, researchers across the world are starting to look more closely at Vitamin D, because an increased deficiency in this nutrient can be found in the most varied of diseases. Dr. Robert O. Young, whose work I have studied for years, has also delved into this subject. He concluded that due to current circumstances it is important to treat a Vitamin D deficiency with natural supplements and natural health measures, which enable responsible contact with the sun again. Meanwhile, according to research data, almost everyone—regardless of gender, age, skin colour and whether or not they live in sunny regions—exhibits a substantial Vitamin D deficiency. Dark- or black-skinned people are particularly affected by this as they need much more sunlight than light-skinned people to produce enough Vitamin D. A Vitamin D deficiency is particularly widespread in industrial countries: one American study even talked of a pandemic. Vitamin D deficiency is thought to contribute to the conditions that open the door to a whole range of illnesses and degenerative processes, such as multiple sclerosis, Parkinson’s, Alzheimer’s, fibromyalgia, chronic exhaustion, epilepsy, muscle weakness, different types of cancer, diabetes, depression, schizophrenia, cardiovascular problems, skin problems, premature aging, migraines, vitamin immunodeficiency, influenzal infections and many more.

In a more recent study, it was discovered that a lack of Vitamin D was even present in 83 percent of people in Saudi Arabia, although this population lives in one of the sunniest regions on our planet. Dr. Andrew Jones, medical director at the Women’s Health Institute, has stated that a Vitamin D deficiency affects both children and adults equally.

Pandemic health trends could thus be connected to the fact that denatured ways of thinking, poor lifestyles and bad nutrition are spreading ever more quickly over the entire planet. The more effectively media channels reach people, the more these models are spread, although this would probably be a blessing if these models were “health and life promoting factors”!

Unfortunately, however, this is not the case: misinformation and panic-mongering still predominate. The advertising that manipulates the masses also significantly contributes to, and increasingly promotes, degenerative ways of thinking, poor lifestyles and bad nutrition across the world. Consequently, over-acidification, accumulation of waste products, toxification and nutrient deficiencies are increasing worldwide—something akin to a pandemic effect!

Regrettably, how to create our own prerequisites for health is not taught in schools, the family or the mass media. Due to this ignorance, most people’s life- styles are more or less insufficient. Even today, in the face of this large-scale Vitamin D deficiency, it is blindingly obvious how much this global deficit in health education affects our lives. The world has decided to shield itself from the sun, the life source for our entire planet! How did we reach such an absurd conclusion?

In the following article, we describe the chemical processes triggered in our skin by sunlight and how to sunbathe “correctly” to allow your body to form vital Vitamin D. You will also learn why sunlight doesn’t cause skin cancer in itself, but rather protects against it – there are other causes that make sunbeams harmful to skin. We tell you which. Vitamin D supports the immune system and has a positive effect on a number of illnesses and complaints. We give you the most important and useful tips about the ‘sun vitamin’, as well as advice on how to ensure your body get a sufficient supply. Find the full article in our Facts are Facts print edition no.6.