Since the deaths of several young women, the vaccination against cervical cancer has come under heavy criticism.

The vaccine Gardasil by Sanofi Pasteur MSD is allegedly supposed to protect against five types of Papilloma virus - there are, however, almost a hundred different types of the virus.

Not so long ago a completely new vaccination was licensed, whose name and purpose has since remained in the media spotlight. A vaccination against cancer! Since the 1960s, cancer research has given us nothing, other than regular appeals for money. There has been no increase in knowledge, but incidences of cancer and resultant fatalities have soared. The fearful citizen is only told at regular intervals that scientists are on the point of a breakthrough.

There are various theories to explain the emergence of cancer. They range from lifestyle and nutritional habits to the most recent conjecture: that a virus or bacteria is responsible.

Medical thought has lapsed into the “virus/bacteria = illness” equation. Thus the idea that the human papilloma virus (HPV) is responsible for the emergence of cervical carcinogens (cervical cancer) and genital warts has been circulating for several years, since, in many cases, this virus can also be observed in the body of the sick person. However, several virologists have challenged this view. Since as far back as 1992 the notion has met with vociferous criticism, which has somewhat been pushed into the background amid the frenzy surrounding the vaccine. The triggers for this debate were two molecular biologists from the University of Berkeley in California. They maintained that there was a lack of autogenetic HPV DNA sequences and corresponding HPV gene expression in the tumours, which had been positively tested for HPV. Instead, they came to the conclusion that the cancer illness was caused by rare spontaneous and chemically activated chromosomal anomalies, which were found in both HPV-DNA positive and negative tested cervical cancer. They substantiate their investigations with the fact that abnormally splitting cancer cells are more susceptible to infection than healthy cells. Moreover, research has repeatedly shown, and has therefore proven, that viruses are simply indicators of abnormal cell proliferation and not their cause. (Regush N. Red Flags Weekly, 25.11.2002.)

To date, a direct causal connection has not been shown that would substantiate the idea that it is actually HP viruses that cause cervical carcinogens. Even the National Cancer Research Institute in the USA admits this. All that is known is that factors such as long-term use of oral contraceptives (the Pill), the number of births, genetic changes, smoking or acquired immune deficiencies encourage the emergence of tumours.

Sharp readers will have been aware that the 2008 Nobel Prize for Medicine was awarded to Prof. Harald zur Hausen, among others, as he was allegedly able to prove decades ago that the HP virus caused cervical cancer. Many critics voiced their concerns in the days following the award. They demanded that Prof. zur Hausen provide clear and precise evidence for his statements. Dr. Claus Koehnlein is one who has directed some questions to the Nobel Prize committee. He and many others believe that as long as the exact origin of said DNA remains unknown, it is impossible to substantiate that a virus is present. He asks the committee to give him proof that the cloned DNA comes from an exogenous1 virus by the name of HPV. Many critics believe that to date only the side effects of the HPV vaccine have been confirmed.

The Vaccine and its Development

According to official figures, 446,000 new cases of cervical cancer emerge every year across the world, of which there are 232,000 fatalities. Eighty percent of these cases occur in developing countries. (ÄrtzteMagazin 26/2003, 27.5.03)

Abrief sharp jab carries not insignificant risks (above): the general widespread effectiveness of the HPV vaccine is as little substantiated as the official illness progression, whereby HPV viruses afflict the uterus and can cause cancer (below). 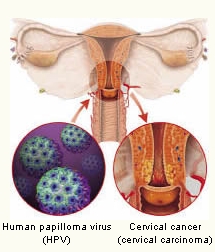 It is therefore calculated that more than 70 percent of “sexually active people” come into contact with the HP virus at least once in their lives. In Germany, approximately 8,000 women are thought to fall ill of the disease, of whom 90 percent spontaneously recover. After one year, these viruses are no longer detectable. In Austria and Switzerland, approximately 500 women per year fall ill. To prevent the illness, women are offered early screening. However, it is acknowledged that 50 percent of all adenocarcinoma and 25 percent of all squamous cell carcinoma of the cervix emerge in women who are regularly screened. (ÄrtzteWoche 24.4.2002)

Two pharmaceutical manufacturers Sanofi Pasteur MSD and GlaxoSmithKline began carrying out worldwide studies in 2002, each using 5,000 subjects aged between 16 and 23. The subjects were vaccinated three times with a new vaccine against HPV within one year, and were regularly examined for four years. (ÄrzteWoche 24.4.2002)

Sanofi Pasteur MSD has produced a vaccine against HPV Types 6, 11, 16 and 18 called Gardasil, while GlaxoSmithKline has produced another against HPV Types 16, 18, 45 and 31 called Cervarix. There are, however, almost a 100 different known types of the human papilloma virus, which is to say that even if the vaccine were to protect, it would still be possible to fall ill from one of the other HP viruses.

However, cell swabs from the endometrium of participants vaccinated with the HPV vaccine were removed every six to twelve months and examined for potential preliminary cancer. Questionable tissue was removed. Tumours were absolutely unable to develop in this way. In order to substantiate the effectiveness of the vaccine, researchers resorted to an auxiliary procedure and examined the frequency of cell changes that could be the preliminary stages of cancer. The hypothesis was that if the vaccine reduced the frequency, it would also decrease the cancer rate. Yet this must be more carefully investigated. (Gute Pillen, schlechte Pillen, 5/2007)

In another study by the same manufacturer, 1,100 women were vaccinated. The observation period lasted only 18 to 24 months. The results of the study showed that in the active (vaccinated) group, antibodies appeared in the blood, in contrast to the placebo (not vaccinated) group. In terms of tolerance, the same amount of side effects appeared in both groups. (ÄrzteZeitung, 29.11.2005)

Detailed side effects affecting the participants were not made known. Not by either manufacturer, about either vaccination. There was simply mention of fever and that three young girls had abandoned the vaccination programme due to undesirable side effects following the Gardasil vaccine.

Many parties are asking where the studies by each vaccine manufacturer actually take place, and who are the people who voluntarily sign up for such research. The rural region of Guanacaste in northwest Costa Rica is very popular with vaccine manufacturers and their researchers. According to reports in the local press, US researchers had come to the Central American country to carry out research on the so-called human papilloma virus (HPV) as far back as the mid-1980s. This research was financed by the American National Cancer Institute (NCI). In the meantime, the duration of this study has been extended until 2010. Research was carried out on approximately 10,000 women who took part as subjects over the first seven years. The attraction for them was the fact that they would be treated at the research project, or would be transferred to national hospitals in case of possible diagnostic findings. The most controversial phase of this study has been running since June 2004. GlaxoSmithKline (GSK) tested its HPV vaccine Cervarix on 20,000 women aged between 18 and 25. Recruitment of subjects and vaccination ended in late 2005. The women were vaccinated three times in the first half of the year and are supposed to be examined “at least seven times” in the subsequent four years. Only very few of these women were aware of what they were in for. They were not informed about the scale of the project, nor the purpose of the study.

Costs of the Vaccination

This vaccination was eagerly anticipated not only by vaccination advocates in the German-speaking world; in English-speaking regions the vaccination scheme has already been operating for two years. In Australia, acceptance into the national vaccination programme was initially rejected due to, among other things, high prices, but was later approved after extensive concessions by Australian Gardasil distributors CSL. In Germany a single injection costs 159 EUR; three vaccines are required. This puts pressure on the health system, with a cost of up to a billion euros per year, according to estimates from the Federal Association of Company Health Insurance. Due to the price reductions in Australia, the estimated costs for the first four years have decreased more than 25 percent. The current cost per injection is 160 Australian dollars (about 96 EUR). In Switzerland, one vaccination (three injections) costs 447 Swiss francs.

In Germany, the high price is no problem according to statements by STIKO president, Prof. Heinz-Josef Schmitt, who states that, “the money is available in Germany!” Where this surplus money is supposed to be coming from, he didn’t say. Prof. Schmitt also seems to forget that not everyone is allied to the pharmaceutical industry as he is, and can’t exactly hold their hands out for financial reward.

The aforementioned Heinz-Josef Schmitt was president of STIKO (the vaccine commission) in Germany until November 2007. Four months before the market launch of Gardasil, he was awarded a 10,000 EUR prize for his “special involvement in promoting the vaccination idea”. The prize was awarded by the German Academy for Children and Youth Medicine, but financed by Gardasil manufacturer Sanofi Pasteur. Now, it would of course have been expected that the president of a public commission would categorically reject such a prize. But Schmitt no longer need trouble himself with such questions of conscience. He now works in the vaccine department of the pharmaceutical group Novartis in Germany.

It is not only Prof. Schmitt or the ladies and gentlemen of STIKO who possess financially sound contacts to the pharmaceutical industry. The new HPV Management Forum at the Paul Ehrlich Institute currently comprises eleven members, of whom nine foster close ties to the pharmaceuticals. The European Society for Cervical Cancer (ECCA) is also more than 50 percent financially supported by vaccine manufacturers Sanofi Pasteur, Roche, as well as GlaxoSmithKline. Moreover, the German cancer research centre is co-owner of the vaccine patents for the cervical cancer vaccine. This means that practically anyone who has approved the vaccine or recommends it also earns money with every single vaccination. This no longer has anything to do with health or prevention, but rather profit and greed.

The list of side effects is long – just take a look at our documented cases. We also explain why more and more medical professionals and even pro-vaccine circles are warning against the HPV vaccination, because it is not quite as effective as its supporters claim... This report, written by one of the most renowned vaccination experts in the German-speaking world, tells you everything you need to know about the vaccination against cervical cancer. And yes, make sure you tell all your friends and neighbors who have daughters themselves! Find the full article in the Facts are Facts print edition no.5.

Studies are increasingly linking autism with damage caused by vaccines. Find out more here: Autism: Rooted in the Bowel