Exodus from Egypt: And the Waters Were Parted…

The Jews revere Moses like no other. He led the Israelites out of bondage in Egypt and gave them the Mosaic Laws. But he could not prevent his people from breaking their covenant with God. Join us on a fascinating search through desert sand and seawaters that holds more than one surprise in store. 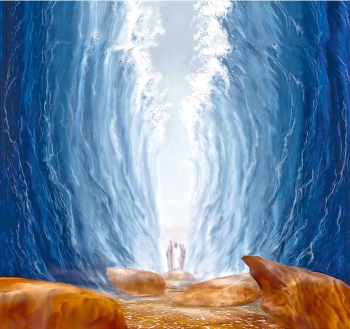 One of the most film-worthy (and long since filmed) Biblical episodes is found in the second book of the Old Testament, which is not called Exodus for nothing. Among other things, it describes the flight out of Egypt and how the Hebrews escaped the lances of the pursuing Egyptian army in an adventure-filled escape. They cros­sed the Red Sea, parted by the hand of God, with dry feet and were brought in safety to the Sinai peninsula. The Pharaoh’s pursuing cavalry, however, was ­swallowed man and horse in the flooding waters that broke over them. This event is believed to have taken place in 1446 BC or 1250 BC. Thereafter, the Israelites, led by Moses, wandered aimlessly through the Sinai for 40 years, where, finally, on the mountain of the same name, they were given the Ten Commandments. So much for the officially accepted Biblical account. But a single glance at a map will show that this commonly known version cannot possibly be true.

Whoever believes it has never checked to see just how wide and deep the Gulf of Suez, which separates Egypt and Sinai, actually is. To cross the Red Sea at this point, even with divine intervention, borders on insanity. Even more so, since it would have been totally unnecessary.

Through the Red Sea—But Where?

As the Hebrews fled from the Eastern Nile Delta (where they lived) to the neighbouring Sinai Peninsula, they didn’t need to cross through any water! The Suez Canal was only built 3,000 years after the Exodus of the Jews—precisely because there was no waterway separating Sinai and Egypt (i.e. it was not possible to sail a ship from the Mediterranean to the Red Sea).

So why should the Israelites follow a long detour to the south along the hostile Egyptian coast only to then find themselves facing a 25-50 kilometre wide barrier of seawater?

No, the Hebrews made a quick get-away and fled by the shortest route to the Sinai Peninsula, which they intended to cross as quickly as possible. Why? Because at that time, the Sinai belonged to Egypt. As long as they hadn’t yet reached Arabia, the Israelites could be attacked by their Egyptian lords on their own soil at any time. The Israelites probably wanted to march overland around the Gulf of Aqaba, which separates the Sinai from the Arabian Peninsula. That is the only likely route, the only open route of escape.

On the other side of Arabia lay the land of Midian, which was out of reach of Egypt’s influence. Moses knew Midian well, as he had lived there for many years as an exile
­­—he was safe there from the long arm of Egyptian law (see box). So what would be more obvious than to bring the Israelites to Midian too?

But God commanded Moses to “turn the people around” and lead them in a south-easterly direction to the nearby coast (Exodus 14:2). A decision that, at first glance, appears to be a suicide mission since the sea cuts off the escape route to Arabia. But on the other hand, the Egyptian forces were probably following too closely behind the Israelites and would not have allowed them to escape to Aqaba and the edge of the Egyptian kingdom unmolested. And it was out of the question that the Hebrew people, with their children, women, and elderly, could have withstood an attack by the ­hostile army. So Moses led the Israelites through the Sinai mountains to a plain by the sea that even today is still wide enough to accommodate a large tribe of one to two million people (the Bible mentions 600,000 Israelite men; women, children, and cattle were not counted).

The geographical description in the Bible, as well as that of Jewish historian Josephus (who lived around the turn of the eras), matches the Beach of Nuweiba. There, on the eastern Sinai and still in Egyptian territory, the Hebrews were challenged by Pharaoh’s soldiers. They fled into the Sea of Reeds—whose waves parted before them as if by magic.

We enlightened people of today may shrug this story off as pure fabrication, with the same amount of truth as the story of Baron von Münchhausen flying on a cannon ball. There are, however, new scientific discoveries that should make us take notice. Infrared satellite pictures reveal that there is an underwater land bridge at this parti­cular spot in the Gulf of Aqaba which links the Sinai Peninsula with Arabia! According to British Admiralty sea maps, the sea there is a mere 300 feet (a good 90 metres) deep, whereas the sea ground on either side drops abruptly to a depth of 800 feet (250 metres) and more.

More astounding still, far out in the sea, divers have found the remains of ancient Egyptian chariot wheels on this sunken mountain range (see image). How on earth did they get there? Could it be that the parting of the Red Sea is more than a legend?

The Mountain of the Lord is Not in Sinai

After their miraculous deliverance, the Israelites wandered forty long years through the desert, the Bible tells us. Now we know that the bleak clime of Midian is meant and not the Sinai desert. Exodus reports that the Israelites rebelled repeatedly during this time of deprivation after the destruction of the Egyptian army, and reproached Moses. “Was it because there were no graves in Egypt that you brought us to the desert to die? What have you done to us by bringing us out of Egypt?” (Exodus 14:11). Here the Bible clearly indicates that the Israelites must have already been in Arabia since the Sinai Peninsula, as already mentioned, was still within Egypt.

That is also why it is so difficult to find archeological proof of the Israelites’ wanderings in the Sinai. That is especially true for Mount Sinai (Arabic: Jabal Musa) that lies in the southern part of the peninsula. The Israelites are supposed to have camped for a longer time in the area around today’s famous St. Catherine’s Monastery, and even have fought a successful battle against the Amalekites there. And of course Moses re­­ceived the Ten Commandments from God’s hand. Supposedly.

So why is there nothing of any archaeological value in this area to support these assertions?

Instead, archae­ologists uncovered count­­­­less Egyptian artefacts in the sand that once covered the Biblical Land of Midian. How such unequivocally Egyptian influences came to Arabia can be easily explained through Israel’s flight. Especially towards the end of their 400 year long sojourn in Egypt, the Israelites had been forced to build entire cities; as a result, they were especially practised in Egyptian architecture and after their flight from Egypt continued to construct their own iconic sites in this style. But more on that later.

Only approximately 50 kilometres away from the spot where the Israelites crossed the Gulf of Aqaba and stepped onto Arabian soil, Jabal al Lawz projects up into heaven. Horeb, its Biblical name, had been burned deep into Moses’ memory and not only because he had herded sheep for many long years on its slopes. No, it was there that the Fire of God had spoken to the exile and revealed his later mission to him (see box). But Horeb had already long been known as the “Mountain of God”. So what place would have been better to receive the Ten Commandments?

End of extract „Exodus from Egypt: And the Waters Were Parted…“

The full article delves into the question of whether or not Mount Sinai in Saudi Arabia is consistent with geographic descriptions in the Bible, and indeed whether there is actually any archaeological evidence for this. Lo and behold: there are photos of the place where Moses struck the rock with his staff to produce water, and where the children of Israel worshipped the Golden Calf. But this is by no means all - we also explain why these facts have been withheld from the public, even to the present day. Take a look at the article in our Facts are Facts print edition no.11.

Read here why Jesus did not die on the cross, where he fled after his crucifixion, and where the grave of Moses is actually located: Jesus Didn't Die on the Cross