Electric cars: The Car That Was Too Good To Survive

In 1995, an electric car came onto the market in the USA that could have revolutionised the automobile industry. Unfortunately, it was too good to survive! Just imagine what the world would be like today if nearly all our comfortable cars ran on quiet, clean and much more efficient electric motors! 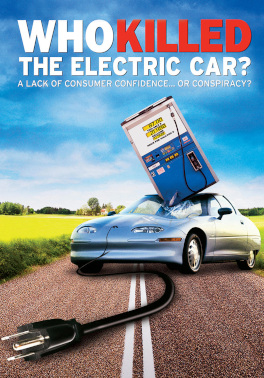 Who Killed the Electric Car? is a 2006 American documentary film directed by Chris Paine that explores the creation, limited commercialization and subsequent destruction of the battery electric vehicle in the United States.

The dark-coloured hearse moves slowly past the countless rows of gravestones, followed by a group of mourners who for once don’t appear in black clothing, but shine resplendently in bright metallic colours. The long snake of small cars rolls by silent as the grave; the only sound is the doleful melody of a bagpipe… it is 24 July 2003, the day on which the concept of the electric car is being laid to rest in the Hollywood Forever cemetery in Los Angeles. In all other respects, it’s an utterly ordinary day, not least because the Californian air is so dirty that the highest smog alarm has to be raised—again.

How this “burial” came about and what happened afterwards is told in Chris Paine’s highly-praised award-winning 2006 documentary film “Who Killed the Electric Car?”. The screenplay is a didactic comment on greed, short-sightedness and intrigue as well as the unscrupulous demonstration of power of influential business kingpins. For once the plot doesn’t come from the nearby Hollywood studios, but life itself.

It had all started so promisingly… In 1987 the world’s then-largest car manufacturer General Motors had won the World Solar Challenge, a solar car race through Australia, with the Sun Racer. The international press was thrilled and GM boss Roger Smith extremely impressed. And so he set the task to develop an electric vehicle suitable for everyday use from the Sun Racer prototype, which could then be marketed to the masses.

A real challenge, since previous electric cars had faltered on insufficient battery power and the tiny range linked to this—let alone a sensible electric motor that operates perfectly in all driving conditions. Alan Cocconi, an electrical engineer and gifted tinkerer, crafted one such drive mechanism in his garage, which he described as a “three-channel stereo amplifier with 100,000 watt performance.” This was an important hurdle passed in the development of the electric car, yet years of more intensive research were to pass before it was ready for marketing.

The times were favourable. In the 1980s people began to talk about environmental protection, not out of nowhere, but because the planet’s contamination had already taken on dimensions that were making people sick. A study from 1983 showed, for example, that a quarter of all 14- to 25-year-olds in the Los Angeles conurbations were suffering from impaired lung function and chronic breathing complaints. Cleaner air was simply hearsay. The smog in the biggest state in the US meant that California had the worst air in the country and caused a worrying rise in asthma and cancer. Smog alarms were the order of the day. And a “clean” car seemed like a boon from Heaven.

Yet no pain, no gain. Sometimes such diligence must also be motivated by external pressure. This human weakness was known to the Californian environmental authority CARB1 and so in 1990 it implemented an emissions law that is unique to date in its far-sightedness and consistency. In 1998, with the Zero Emission Vehicle Mandate, the authorities instructed the car manufacturers to produce an increased number of cars that were completely emission-free. By 2003 at least 10 per cent of all cars sold in California would have to be emission-free. The consequences threatened were hard-hitting: if the legal guidelines were not met, defaulting manufacturers would not be permitted to sell their entire range of cars in California anymore!

The car bosses in Detroit used to issuing orders rather than receiving them were not prepared for this kind of ultimatum. Yet by 2003, a whole lot more grass would grow over this hotly-debated ground. That’s what the GM chiefs thought, too, who still had an ace up their sleeve of which the general public knew nothing about.

GM played their card with a drum roll, when in 1996 the EV1 (Electric Vehicle 1) was presented for the first time at the Los Angeles Auto Show. The elegant two-seater sports car took the public by storm. Quiet, quick, comfortable and exhaust-free, the EV1 was soon gliding along the roads of California and drawing admiring glances from every direction. Even with the first generation of batteries, you could drive 130 kilometres (80 miles) before the car had to be recharged with electricity. Even this small range would be enough for more than 90 per cent of American commuter traffic today, not to mention the much smaller European dimensions. And as you could simply plug the car in and charge up, “filling up” was no problem: Hung overnight in your own garage “to infuse”, by morning you had a fully operational EV1 again.

GM had kicked off an avalanche with the first standard electric car. Honda, Ford, Toyota, Nissan, VW and other manufacturers soon followed with existing models having been converted to run electrically, whilst film stars provided free advertising for the stylish EV1 on American talk shows. Tom Hanks, for example, raved on the Letterman show: “[…] And then there’s this thing on the floor called a pedal, a pedal, and what you do is press on that, and believe it or not that sucker goes; he will take you down the PCH so fast you could get a ticket!” And Mel Gibson compared the EV1 to Batman’s Batmobile and recalled of his first time: “I felt like Batman…”

That’s actually not so far-fetched. The EV1’s maximum speed was limited to the standard 130 km/80 miles per hour, but in a test without an electronic speed limit the little racer reached a phenomenal 295 km/h (185 miles/h)! In addition, the electric car sprang from zero to a hundred km/h (62 miles/h) in just eight seconds—an achievement that even a sports car could be proud of.

Kris Trexler was one of the happy few to drive an EV1. On an Internet blog you can still read today, he reported in April 1998 about his experiences with the electric car. Even then, a better NiMH battery (without memory effect) and stronger battery chargers ensured that you could charge the battery rapidly (from 20 to 80 per cent) within 15 minutes. An 80 per cent charge lasted 45 minutes. When Trexler wrote his report, there were several hundred charging stations in public car parks in southern California alone, where you could charge up your electric car often for free.

Not only was the EV1 absolutely exhaust-free and virtually soundless, it was also very easily maintained. Kris Trexler drove an average of 1,300 km (800 miles) per month, paying about 17 US dollars in 1998 for the electricity he used—considerably cheaper than two tankfuls of petrol.

But that wasn’t all: the EV1 was practically zero-maintenance. Its electric induction motor was actually not mechanic like the combustion engines and only had a single movable part. So you didn’t need to maintain the motor, as there was hardly any wear. The obligatory oil change wasn’t needed, either. And the brake blocks also held out considerably longer, because the car was slowed down by the electric motor, too. An EV1 “mechanic” described a typical service as the following: “Every 8,000 kilometres (5,000 miles), we jacked up the cars, switched on the tyres, filled up the fountain solution—and sent it back on the road.”

That was almost fifteen years ago. So why aren’t there any electric cars out there today? The EV1 was—although only the start of a promising era—simply too good: no environmental pollution, chargeable almost everywhere, extremely cost-effective, practically zero-maintenance—and also inexpensive if produced in large enough quantities. Environmentalists and users celebrated, but the oil lobby was ripping out its hair.

The Black Fingers of the Oil Barons

Oil is still virtually the only energy source worth mentioning when it comes to human mobility. It’s a business of unimaginably high sums, whose profits also bring the financial players bonuses of billions thanks to speculation on oil prices, as we experienced in the very recent past, without a single additional barrel of oil being mined.

Jimmy Carter was the last US president to try to tackle the energy issue with actions, not just pretty words, by strongly encouraging the development of alternative energy sources. After the oil embargo in the mid-1970s he promised the American people in 1977 that the USA would never again import so much crude oil as it had at that time. Back then the figure stood at 8.8 million barrels of oil a day; in 2005 it was already 13.5 million barrels. Politics knows well enough that saving schemes also push down economic profit, which is why President George W. Bush preferred to extract additional oil on American soil rather than reduce oil consumption to reduce dependence on foreign oil—something which just happened to lie in the middle of a nature reserve in Alaska. He also approved risky deep-sea drilling in the Gulf of Mexico.

His successor Obama must have discovered by now that the oil barons still call the shots despite Deepwater Horizon. The power of the oil industry also illustrates its profit: in 2003 the three biggest US oil multinationals ExxonMobil, ConocoPhilips and ChevronTexaco experienced a profit of 33 billion US dollars. By 2005 it was already 64 billion. And in 2008 even the legendary recorded sum of 71 billion—that’s 71,000 million dollars’ profit, not turnover!

In the face of such numbers, you may well be asking whether the little EV1 could actually pose a threat to these economic giants. By itself alone, certainly not. Its example and the idea behind it, however, had enough potential to trigger a revolution that the oil companies really didn’t have in mind.

And so the big PR guns were brought in. As more and more electric cars trundled down Californian roads, and communities erected electricity stations at government expense, editorials suddenly appeared in the national press in which doubt was cast on the wisdom of electric cars. It was argued that increased national electricity consumption would make the construction of additional coal-fired power plants necessary in order to produce the electricity. These power plants would pollute the air more than cars, which drove with petrol and diesel. It was a claim that disregarded alternative sources of power generation, much as it did a government study stating that the electric drive of cars would pollute nature less than combustion engines, even if you had to get the additional electricity from coal. Economic commentators even went so far as to say publically that electric cars were an unfair form of environmental protection, because only rich people could afford one.

At the same time several citizens’ groups sprang up in California that condemned the construction of charging stations for electric cars as a waste of tax money. It turned out that all these “voices of the people” and the “free press” had been financed by the oil lobby.

End of extract „Electric cars: The Car That Was Too Good To Survive“

This exciting, and in many respects exemplary, article goes even further. Learn what nasty tricks were deployed by the car manufacturers and oil industries to force the new generation of electric car out of service – despite massive opposition from the public. Learn why hydrogen fuel cells will only shackle the world in a new way and consume huge amounts of energy (facts that are mostly kept quiet) – and why even hybrid cars are merely a temporary solution. The future belongs to pure “chargers”, and we’ll show you precisely why. Find the whole text in our Facts are Facts print edition no.9.