Science is gradually proving the power of the mind.

Sometimes, it is said, one must travel far and wide to find oneself—something certainly true of former astronaut Edgar Mitchell, member of the Apollo 14 crew and the sixth man to walk on the moon (1971). On his return flight through space, this pragmatic engineer and rationalist went through an emotional and spiritual experience that was to change his life: “Suddenly from behind the rim of the moon, in long, slow-motion moments of immense majesty, there emerges a sparkling blue and white jewel, a light, delicate sky-blue sphere laced with slowly swirling veils of white, rising gradually like a small pearl in a thick sea of black mystery…” he later wrote. 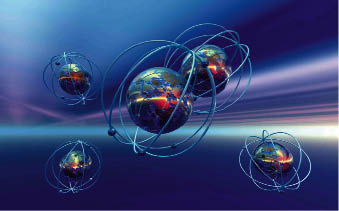 Hermetic principle “as above, so below”: Noetics proves that all Life is connected and that the microcosm and macrocosm inform each other.

“It takes more than a moment to fully realise this is Earth—home. On the return trip home, gazing through 240,000 miles of space toward the stars and the planet from which I had come, I suddenly experienced the universe as intelligent, loving, harmonious. We went to the moon as technicians; we returned as humanitarians.”

In that metal capsule high above our earthly sky, Edgar Mitchell experienced something that sooner or later will be bestowed upon anyone seeking spirituality: the recognition that you can’t think God, you have to feel Him—or is it Her? “But when I saw the planet Earth floating in the vastness of space, the presence of Divinity became almost palpable, and I knew that life in the Universe was not just an accident based on random processes.”

Binding Together the Inner and Outer World

Two years later in 1973, Mitchell founded the Institute of Noetic Sciences, IONS for short, and began to explore the inner universe with the same passion he once had applied to outer space. The name of this new science comes from the Greek word noesis or noetos, which roughly means spiritual perception or intuition; even Greek philosopher Plato had long ago used this word when writing about the human being. IONS, which is based in the Californian town of Petaluma, dedicates itself to research into consciousness and aims to find a connection between the microcosm and the macrocosm, the inner and outer world, by using precise scientific methods—a goal totally in line with the hermetic teachings of previous centuries.

Scientists at IONS are, among other things, not only concerned with the subject of reincarnation; they also deal intensively with quantum physics. In the world of the smallest particles, there occur phenomena that Albert Einstein called “spooky action at a distance”, today referred to as ‘quantum entanglement’—Science is gradually learning that particles can apparently “communicate”, even over great distances. So-called quantum teleportation is a process by which one unit of information can be transferred from one particle to another, regardless of location or distance. This of course would also suggest that our consciousness can communicate with other particles outside our body as well.

Edgar Mitchell has made it his life’s work to prove the inconceivable power of human consciousness and to “apply that knowledge to the enhancement of human well-being and the quality of life on the planet.” Yet he is by no means the first pilgrim to tread the path of these ancient mysteries.

Quantum Physics and the Cosmic Psalter

Before him came the fathers of modern quantum physics. Both Schrödinger and Heisenberg had read the Upanishads—2,500 year-old holy Hindu texts of the Vedas—which inspired them to develop their own scientific theories. The Austrian Erwin Schrödinger is seen as the founder of quantum mechanics and in 1933 won the Nobel Prize for Physics. Werner Heisenberg was also one of the most significant physicists of the 20th century, and was also honoured with a Nobel Prize. In 1927 he formulated the Heisenberg Uncertainty Principle, a fundamental statement within quantum mechanics. The German scientist had discovered that you can’t precisely determine place and impulse at the same time with subatomic particles, because they manifest themselves either as a particle or as movement. This was the start of a very important development in quantum physics: the idea that the very act of observation will inevitably affect and change the object observed—through the consciousness of the observer. Objective science is therefore absolutely impossible; the researcher himself determines the result of his investigation to some extent because a positive or negative attitude to the expected results makes a difference. Even if we disregard the deliberate manipulation of research results, which is today unfortunately shockingly widespread, these quantum mechanical connections alone would explain why not all researchers always get identical results under precisely the same laboratory conditions.

The fact that such phenomena are possible at all proves once again what the ancient mysteries have taught for aeons: that all life is connected and mutually influential. English poet John Donne grasped this in 1624 with the world-famous words: “No man is an island, entire of itself, every man is a piece of the continent, a part of the main […] Any man’s death diminishes me, because I am involved in mankind and therefore never send to know for whom the bell tolls, it tolls for thee.”

There are even more consonances: the so-called superstring theory of modern quantum physics is based on the assumption that our universe consists of ten dimensions bound together. This is precisely what Italian abbot and order founder Joachim of Fiore claimed as far back as the 12th century when he depicted ten spheres in his Cosmic Psalters. Originally he called his work The Ten-stringed Psalter: just as the strings of the medieval zither instrument come into resonance with one another, so too would the spheres of the universe influence each other, wrote the medieval history theologian. This idea coincides with the Zohar, which emerged at roughly the same time (some scholars even claim that the Zohar is already two thousand years old). This collection of mystical Jewish texts contains the ten Emanations of God, better known as the Tree of Sephiroth—this “tree of life” is often portrayed with ten interlinking circles.

End of extract „Noetics: Space Travel Through the Inner Universe“

This article deals with the power of thought and discusses British journalist Lynne McTaggart’s global consciousness experiments. Research at renowned institutes such as the University of Princeton is also examined, as well as experiments with random generators. Plus we explain what these new findings mean for the future of mankind. Find the full article in our Facts are Facts print edition no.8.

What Noetics scientifically proves today was anticipated by the Ancient Mysteries thousands of years ago. Read more about their essence and how strongly they influenced the American Founding Fathers here: America: The Dream of a better World