These days there is an illness from which around two to four billion people suffer without even realising it. They suffer because scientific medicine is, for the most part, still unable to pinpoint the cause – and the ailment would actually be reasonably easy to cure within mere weeks!

To make matters worse, the illness presents a variety of seemingly unrelated symptoms, most of which already carry a label themselves: “burn out”, for example. Or attention deficit disorder. Depression. Chronic fatigue. And not just these: anxiety and difficulty concentrating are also among the symptoms of this illness, as are physical and mental exhaustion, reduced physical and mental capacity, heart palpitations, migraines, dizziness, feeling cold, shortness of breath during physical exertion; painful neck tension, sleep disruption, hair loss and brittle nails. 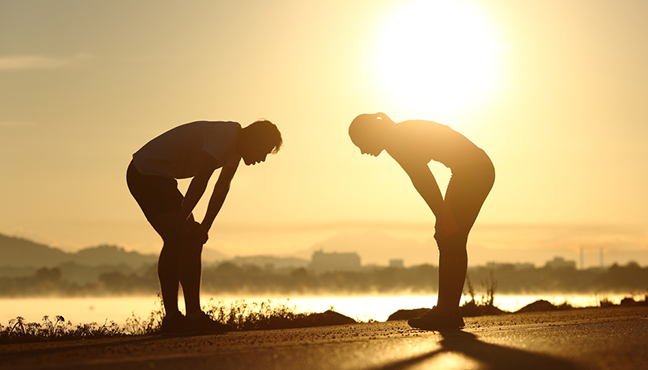 A weakened Mars influence in the blood will cause you to trudge arduously through life.

“It’s all too much for me. I’m only 32 years old and my batteries are empty; I could sleep forever. I often feel depressed for no reason and my self-esteem is at rock-bottom. Recently, I can’t get along with the kids any more, uneasiness reigns in my family because my nerves are frayed. I’m so very miserable about it; I wish things were different. In the meantime, I can’t sleep well at night any more, so in the day I’m totally drained and can’t even work on certain days. I hope I don’t get fired. My boss is asking what’s wrong with me. What can I say?” This young lady’s complaint is typical of countless women, who, without knowing why, have been ensnared in the same state of tiredness. Everything is running smoothly and yet they feel as though their batteries are completely empty.

“Going to the doctor was downright frustrating,” complains the young woman. “After a comprehensive physical examination and blood test, the result came back positive: I was healthy. No organ damage, no anaemia, no thyroid hypofunction, or whatever. Great. Yet I would have preferred that they had found something. Something is making me ill!”

In the end, the patient receives psychotropic drugs with anti-depressant effects, which she takes reluctantly. “I don’t understand the world anymore. How have I become a ‘psycho’? And all within six months!” Despite all the ‘psycho pills’ she collapses after jogging for only five minutes. Bed-rest and a week off work do not improve her condition. Her self-confidence evaporates, just like her desire for physical intimacy with her husband – which also causes problems in their marriage.

A second opinion finds nothing more concrete than a “physical and mental state of exhaustion”. The patient falls into self-recrimination: “Other people have kids and work too – and they manage fine!”

So she is simply a wimp. And wimps who want to regain their self-respect are hard on themselves. “Just pull through” is her motto. Just get on with your life as though there is nothing wrong. “My willpower coaxes my heavy body to get up in the morning, not to fall asleep at the wheel and not to be grouchy at work.” But after a few weeks she starts to notice that she is fooling herself: “Now I’m also suffering from neck pain and headache, in addition to the old symptoms. I often have a feeling of dizziness and have to hold on tight to my desk so as not to topple over. For God’s sake, I am really ill!” she shudders. Something good must come out of her condition, though: surely it is now so severe that it can be diagnosed.

But the doctor is just as perplexed as before and prescribes physiotherapy for the neck-ache. “Nine treatments go by without experiencing any improvement. Slowly I inch toward total desperation and often just have to bawl.” Meanwhile, her family is getting ever more worried about her.

Then – at last – the turning point. The third doctor finally recognises what the patient is suffering from, or rather what she is lacking: iron. How so, when the previous doctors did not find anything in their blood tests?

The problem is that scientific medicine considers a very low iron value to be normal. Depending on the place and hospital, patients with a ferritin value of 20 or 30 nanograms of iron per millilitre of blood are considered to have sufficient iron. A healthy person, however, has an iron value of 200 to 300 nanograms per millilitre of blood! After the patient had received four iron infusions in two weeks, she was suddenly – miracle of miracles – just as fit as in the old days.

“I think it’s a real cheek to label me a ‘psycho’ and to dispense anti-depressants instead of giving me the iron I was lacking. I was like a little plant, whose earth was dry and who couldn’t thrive properly. I had suffered in ignorance for almost a year. What must it be like for all those women who are treated wrongly this way for years? But at last, the dry little plant got water, not psychotropic drugs. So why didn’t the first doctors give me my ‘water’, but anti-depressants?”

At the Core of the Blood

It is iron that makes our blood red. Haemoglobin, the red blood pigment is a complex protein molecule and contains a central divalent iron atom. This molecule is responsible for transporting oxygen from the lungs to the cells. Haemoglobin contains about 71 percent of the iron stored in the body, 10-12 percent is bound in myoglobin (muscle protein to store oxygen); the remaining 10-15 percent is found in ferritin, a special iron storage protein. A healthy average adult carries about 3.5 to 5 grams of iron in them.

The bone marrow of an adult man produces an average of 150 billion red blood cells per day! In every new blood cell, 300 million molecules of haemoglobin are created with iron as the main component. After about 120 days, the red blood cells are broken down in the spleen and liver. The newly-released iron is then once again available for the iron cycle. The body loses about a milligram of iron every day through the bowel, kidneys and skin. In women, the loss increases by one to two milligrams per day, as women lose blood every month through menstruation. To maintain the necessary amount of iron, the body must be supplied with a corresponding amount of iron from external sources. Since only a fraction of the iron is absorbed by the body from food, the recommended daily intake for men and non-menstruating women is 10 milligrams, or 15 milligrams for women of menstruating age.

Today, it is mainly women who exhibit iron values that are too low. After all, they bleed throughout the course of their lives – a total of around five to ten years of constant bleeding, all put together. Obviously they lose more iron than they take in. As mentioned previously, women of menstruating age therefore require 15 milligrams of iron per day from food – the same as children. Active, sporty women and pregnant women need the most (30 mg/day), followed by young girls, haemostatic mothers and active men (20 mg). Adult men and people over fifty usually require just 10 mg. An exception to this is elderly people; depending on their state of health, they should supply their bodies with 15 to 39 mg of iron per day.

However, that is easier said than done. The body can, in fact, only make use of a tenth of the iron consumed. Iron from meat or fish is better absorbed than iron from plants; Vitamin C facilitates the absorption of plant iron.

There are two different forms of iron: so-called divalent iron is found in the oxygen-transporting protein of red blood cells (haemoglobin) and in the oxygen store of muscle tissue (myoglobin). This is absorbed well by the body. Trivalent iron is found in plants, i.e. in vegetables, salads and fruit, as well as in stored iron (ferritin) in the muscle tissue. It must first be reduced to divalent iron, and is therefore absorbed worse by the bowel, which means that one has to eat considerably bigger quantities of iron-rich foods if one follows an exclusively vegetarian diet. The best thing to do is consume Vitamin C at the same time as iron, which facilitates the absorption of plant iron. On the other hand, iron inhibitors are milk and soy products, as well as eggs. Red meat contains plenty of iron (mainly pork liver), but sausages, amaranth, oats, bread, vegetables (particularly spinach, black salsify and legumes) are also good sources of iron.

If you seldom consume these foods – and many people today eat much less red meat than a generation ago – this will very probably deplete your iron stores. Increasing levels of exercise in the population is also a challenge for maintaining iron supplies. The high consumption of oxygen during strenuous sports activities can also lead to a lack of iron. Operations and accidents involving extreme blood loss, blood donations and birth are the situations (aside from menstruation) where a lot of iron is lost through blood, which must then be supplied first by external sources.

When blood flow through the bowel is reduced, or when there are stomach and digestion problems, the body can no longer absorb enough iron. Hormonal imbalances, infections, arthritis, cancer, liver or kidney disease can also lead to a lack of iron.

Some doctors recommend iron in the form of Schüssler cell salts: Ferrum phosphoricum D 12 (iron phosphate) tablets for “normal” iron deficiency, and Ferrum phosphoricum D 6 tablets for particularly serious cases, where physical symptoms such as burn-out or chronic fatigue are already present. However, evidence shows that regular iron tablets are badly absorbed in the bowel, and often cause unpleasant constipation at the same time.

Moreover, according to Swiss doctor Beat Schaub, often when such a serious iron deficiency is present it can no longer be alleviated with iron tablets at all. Schaub is one of the “discoverers” of iron deficiency syndrome. He was born in 1956 and graduated in homeopathic studies from the University of Freiburg after his medical studies. In the mid-1990s, together with a group of doctors from Basel, he researched why ever more patients were complaining of tiredness and exhaustion. “At that time we listed everything that a patient could possibly be suffering from to find a cause. And then we came across the theoretical possibility of iron deficiency. I later went back to it intuitively, yet also very consciously. And there I found an actual causal relationship. Special software meanwhile allowed me to prove fairly precise correlations between determined laboratory values and varying moods and physical conditions.”

At the present time, 1.5 billion people across the world are suffering from iron deficiency anaemia, which is the most common deficiency illness.

The effects of iron deficiency are serious at any age. Muscle disorders and/or difficulty concentrating, which frequently occur in elderly people, can be caused by iron deficiency – blood no longer transports sufficient oxygen. People feel lethargic, become desirous of avoiding human contact, are in agony when simply climbing the stairs. The blood vessels try to compensate for the lack of oxygen by dilating. This in turn can lead to heart and circulatory problems.

Research shows that elderly people with an iron deficiency risk ending up in hospital, and have to go into an old people’s home earlier.

tudies have shown that a lack of iron in children and young people can lead to a significantly worse school performance; poor nutrition only aggravates the effect. Yet there are remedies available: read our full article to find out the best ways to get to grips with an iron deficiency. Find the full article in Facts are Facts print edition no.5.