Did John F. Kennedy's determined (and then secret) behind-the-scenes efforts to prevent Israel from building a nuclear weapons arsenal play a pivotal part in the events that led to his assassination on November 22, 1963? 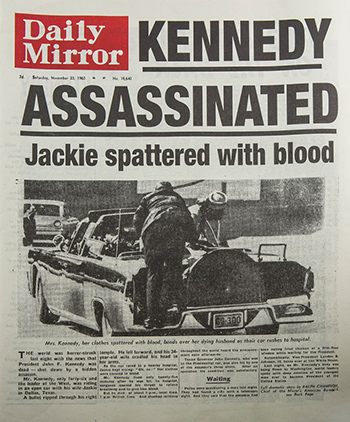 Was Israel's intelligence service, the Mossad, a front-line player in the JFK assassination conspiracy alongside elements of the CIA and international organized crime?

Why did Hollywood film-maker Oliver Stone fail to reveal-in his 1993 all-star JFK assassination extravaganza-that the hero of his epic, former New Orleans District Attorney Jim Garrison, had privately concluded that the Mossad was ultimately the driving force behind JFK's murder?

As worldwide attention focuses on the problems of nuclear proliferation in the Middle East-is it valid or appropriate to raise the question of possible Israeli complicity in the assassination of an American president?

These are just a few of the hotly controversial questions being posed by this author's book, Final Judgment, which has emerged as a proverbial "underground best-seller" in the United States, the topic of heated debate on the Internet and the subject of angry exchanges in a variety of public forums.

What Oliver Stone didn't tell us

In 1992, former U.S. Congressman Paul Findley, a liberal Republican, made the little-noticed but intriguing comment that "in all the words written about the assassination of John F. Kennedy, Israel's intelligence agency, the Mossad, has never been mentioned, despite the obvious fact Mossad complicity is as plausible as any of the other theories."

Where in the world could Findley-never known to be an extremist, by any means, and certainly not one given to venting conspiracy theories-have ever come up with such an assertion?

Actually, it's no so extraordinary a thesis, if one looks at the historical record, placing all of the conventional theories about the JFK assassination in a new perspective, calculating in previously-little known details that shed stark light on the circumstances surrounding JFK's demise and the geopolitical crises in which the American president was embroiled at the time of his shocking murder.

In truth, even the most recently widely-disseminated exposition of JFK assassination theorizing-Oliver Stone's 1993 blockbuster film, JFK-did not present even the entire picture.

Although Stone portrayed former New Orleans District Attorney Jim Garrison as a hero for pointing the finger in the direction of elements of the U.S. military and intelligence networks as the guiding force behind JFK's murder, what Stone didn't tell his audience was something even more controversial: that, privately, after some years of research and reflection, Garrison had reached an even more startling determination: that the driving force behind JFK's murder was no less than Israel's feared intelligence service, the Mossad.

As astounding as it sounds, there's actually good reason to conclude that Garrison may have been looking in the right direction. And in this day when the debate over "weapons of mass destruction" is in the forefront of global discussion, it is not so extraordinary a thesis as it seems.

Although more than 40 years have passed, fascination with the murder of America's 35th president won't go away. Assassination "buffs"-not just in the United States but around the globe-continue to chip away at the conclusions of the two official U.S. government investigations into the affair.

Although the 1979 report by a special committee of the U.S. Congress formally contradicted the earlier 1964 finding by the presidentially-appointed Warren Commission that alleged assassin Lee Harvey Oswald was acting alone and concluded instead that there was indeed the likelihood of a conspiracy behind the president's murder-hinting broadly at the involvement by organized crime-the congressional committee's final determination actually raised more questions, in some respects, than it answered.

Stone's film-featuring Kevin Costner as Garrison-raised the specter of involvement by elements of the so-called "military-industrial complex," along with a scattering of anti-Castro Cuban exiles, right-wing militants, and rogue Central Intelligence Agency operatives. The film told the story of Garrison's investigation, and ultimately unsuccessful prosecution, of New Orleans businessman Clay Shaw (then suspected of being-and later proven to be-a collaborator with the CIA) for involvement in the JFK conspiracy.

However, as we now know, not even Stone was faithful to his hero. Longtime independent JFK assassination investigator A. J. Weberman has since revealed that, during the 1970s-well after Garrison's prosecution of Shaw-that Garrison was circulating the manuscript for a novel (never published) in which Garrison named Israel's Mossad as the mastermind of the JFK assassination conspiracy.

Garrison never said anything about this unusual thesis-at least publicly. But beginning in the mid-1980s and well into the present day, new evidence has emerged that not only points to good reason for Mossad motivation to move against John F. Kennedy, but also to the likelihood that not only Clay Shaw (Garrison's target) but other key figures often associated in published writings with the JFK assassination were indeed closely tied to the Mossad and doing its bidding.

And what is particularly interesting is that none of the individuals in question-Shaw included-happened to be Jewish. So the assertion that allegations of Mossad involvement are somehow "anti-Semitic" in nature fall flat on that fact alone. But Mossad complicity-as the record indicates-is a very real possibility.

Garrison's critics continue to assert that the New Orleans District Attorney couldn't make up his mind as to whom he thought had orchestrated the assassination of President John F. Kennedy. This indeed was the primary complaint against the rambunctious and outspoken and quite colorful prosecutor: that he simply couldn't make up his mind. And this is one of the reasons that even many of Garrison's supporters not only began to question his sincerity, but even as to whether Garrison's investigation was even worth the trouble.

In truth, Garrison did tend to shoot from the hip. That may have been his biggest mistake-one of many-in the course of his controversial inquiry into the murder of America's 35th president.

At one time or another, during the course of that investigation, Garrison pointed his finger at one or another various possible conspirators-ranging from "right-wing extremists" to "Texas oil barons" to "anti-Castro Cuban exiles" to "rogue CIA operatives." Occasionally Garrison went so far as to say that the conspiracy included a combination of those possible conspirators.

When Garrison finally brought one man to trial, widely respected New Orleans trade executive Clay Shaw, Garrison had narrowed his field, suggesting, primarily, that Shaw had been one of the lower-level players in the conspiracy.

According to Garrison, Shaw was essentially doing the bidding of highly-placed figures in what has roughly been described as "the military-industrial complex," that combination of financial interests and armaments manufacturers whose power and influence in official Washington-and around the world-is a very real force in global affairs.

Garrison suggested that Shaw and his co-conspirators had multiple motivations stimulating their decision to move against President Kennedy. Among other things, he asserted:

In the end, after a relatively brief deliberation, the jury hearing the Shaw case acquitted Shaw. It was only later-much later-that evidence emerged that Shaw had indeed been a CIA informant, Shaw's protestations the contrary.

Only in recent years has it been determined, for example, that the American CIA was deliberately sabotaging Garrison's investigation from within, not to mention providing assistance to Shaw's defense. And although there are those who continue to say that Shaw's acquittal "proved" that Shaw had nothing whatsoever to do with the JFK conspiracy, the bigger picture suggests quite the contrary.

Shaw was involved with something very murky and so were others in Shaw's circle of friends and associates. And they were, in turn, directly connected to the strange activities of Lee Harvey Oswald in New Orleans, the summer just prior to the assassination of John F. Kennedy, before Oswald's sojourn to Dallas. Dozens of writers-many with differing points of view-have documented all of this, time and again.

So although the "official" legend is that Jim Garrison believed that the CIA and the military-industrial complex were the prime movers behind JFK's murder, when all was said and done, however, Jim Garrison had privately reached quite a different conclusion, one that remains largely unknown even to many people who worked with Garrison throughout the course of his investigation.

In fact, as noted, Garrison had decided-based on the entirety of everything that he had learned, from a wide variety of sources-that the most likely masterminds of the JFK assassination were operatives of Israel's intelligence service, the Mossad.

The remarkable truth is that-although Garrison apparently didn't know it at the time, precisely because the facts had yet to be revealed-Garrison may have been on to something, far more than he realized.

The public record now demonstrates that in 1963 JFK was embroiled in a bitter secret conflict with Israeli leader David Ben-Gurion over Israel's drive to build the atomic bomb; that Ben-Gurion resigned in disgust, saying that because of JFK's policies, Israel's "existence [was] in danger." Then upon JFK's assassination, U.S. policy toward Israel began an immediate 180-degree turnaround.

Israeli historian Avner Cohen's new book, Israel and the Bomb, confirms the conflict between JFK and Israel so powerfully that, Israel's Ha'aretz, declared Cohen's revelations would "necessitate the rewriting of Israel's entire history." From Israel's perspective, writes Cohen, "Kennedy's demands [on Israel] seemed diplomatically inappropriate…inconsistent with national sovereignty." In any case, Cohen pointed out, "the transition from Kennedy to [Lyndon] Johnson…benefited the Israeli nuclear program."

While all of this presents a strong motive for Israel to strike against JFK, even maverick Israeli journalist Barry Chamish acknowledges that there exists "a pretty cogent case" for Mossad collaboration with the CIA in the assassination conspiracy.

The fact is that when Jim Garrison prosecuted Clay Shaw with conspiracy in the assassination, Garrison had stumbled upon the Mossad link.

End of extract „Hushed-Up: The Missing Link to JFK Assassination“

Find the whole article with its many extra informations in our Facts are Facts print edition no.2.

Do you wanna know, how the U.S. Army overrides the natural human fear of killing? By using the video games presently found in millions of children's rooms. Read the awakening article: Video Games: Let's Play Killer.