Barack Obama: Really "made in the USA"?

So was he or wasn’t he born in the USA? Barack Obama’s publicised birth certificate from Hawaii has raised more questions than it has answered. Lucky for him, Obama ­liquidated Osama at just the right moment—nothing else was talked of then. But to Obama’s embarrassment, there’s another birth certificate, according to which he was born in Kenya.

Already a Stumbling Block in the 2008 Campaign

For many Americans, Barack Hussein Obama is a riddle wrapped in a mystery inside an enigma, as Winston Churchill would say. Never in recent American history has such a little-known presidential candidate campaigned to become President. When people started hearing about Barack Obama’s family still living in Kenya, his grandmother having been there in the hospital at Mombasa, Kenya, when he was born, and his having lived for a while in Muslim Indonesia, they started to ask questions—serious questions about his true citizenship, and his true place of birth. That was when Obama’s campaign committee hastily came up with a copy of his Hawaiian birth certificate and posted it online for all to see, prior to his election for President in 2008, to prove that he was an American. And to add to this fallacy, they even claimed Barack Obama, Jr. to be the 11th cousin of George W. Bush, the 43rd US President. And as if this was not enough of a ‘stretch’ in itself, Obama also obtained papers from the leaders of the Church of Jesus Christ of Latter-day Saints which suggest that he is also the 17th cousin of Prince Charles, and the 16th cousin of the Queen of England…once removed! 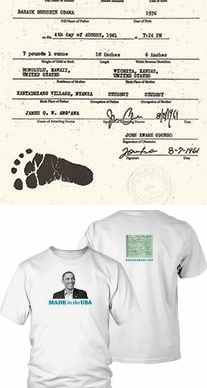 “Made in the USA”: Obama had T-shirts with his Hawaiian birth certificate printed for the upcoming campaign. But according to the above birth certificate, Barack Obama was born on 4 August 1961 in Coast Province General Hospital, Mobasa, Kenya.

But as far-fetched as these false claims might be, so too was the so-called birth ‘certificate’ they came up with: it was not the real thing. It couldn’t be. Why? Because one hard fact that most people seem to conveniently ignore is that the State of Hawaii, citing its laws, will not release the President’s full birth record to anybody.

Why again? Because if you do a search on the Internet, you will see that he is reported to have been born in two different hospitals. Nobody knows where in Hawaii he was born, and Obama is not saying. Reports by his own sister Maya Soetoro (in two separate interviews) state that he was born at two different hospitals, The Queen’s Medical Center at 1301 Punchbowl Street, Honolulu, Hawaii and/or the Kapi’olani Medical Center at 1319 Punahou Street, Honolulu.

The state of Hawaii wasn’t much help and has produced what might be called a supposed shortform ‘certificate of the certificate,’ giving the basics of what the original document purportedly says.

However, at the time Oba­ma was campaigning in 2008, Britain’s Daily Mail had this to say: “…It has become apparent that what has been discovered is an unspecified listing or notation of Obama’s birth that someone has made in the state archives, and not a birth certificate. […] A long­­form, hospital-ge­n­erated birth certificate for Barack Obama may not exist within the vital records maintained by the Hawaii Department of Health…He acknowledged the birth certificate issue would have ‘political implications’ for the next presidential election ‘that we simply cannot have.’”

Furthermore, it is reported that the State told the media that the original copy of his birth certificate had “disappeared,” since all such records were supposedly ‘discarded’ in 2001. How convenient!

But the State denies this, in effect denying the absence of something it can’t or won’t produce. It is also reported that Rahm Emmanuel, Obama’s then Chief of Staff in the White House (now mayor in Obama’s home town of Chicago), when asked about this, said: “Tell everyone to ‘screw it,’ and let the complainers go to hell”!

The first sentence as stated in the US Constitution also disqualifies Barack Oba­ma with what some say is one of several supposed “technicalities,” one of which is that because Obama was born in Kenya, at the time of his birth he was technically a citizen of the British Commonwealth, who then became a citizen of Kenya after they declared independence in 1963. So the question being asked today by millions of Americans is simply this: is Barack Hussein Obama (whose father is a Kenyan native of the Luo tribe, but whose mother is white US American) a native-born American or a natural-born African?

Unfortunately, the answer to this has now been deliberately skewed so badly by both the media (and the President’s ‘handlers’) that Obama is just hoping everything will die down during his short tenure in the White House, and that such people (called ‘birthers’) will stop asking such an embarrassing question, and that he will hopefully be re-elected in 2012 for another four-year term… But because Obama has spent so long evading the question, the issue has grown to such an extent that it even overshadowed Congress’ budget debates in April 2011. The birth certificate (allegedly from Hawaii) publicised by the White House on April 27 proved to be a flop, as we will see. Barack Obama is now obviously hiding the truth by deliberately confusing the facts in the hope that no one will find out that he is really an African Muslim born of the Luo tribe of Kenya.

And so we wish to shed some light on this darkness, because the Establishment obviously fears speaking the plain truth in public. 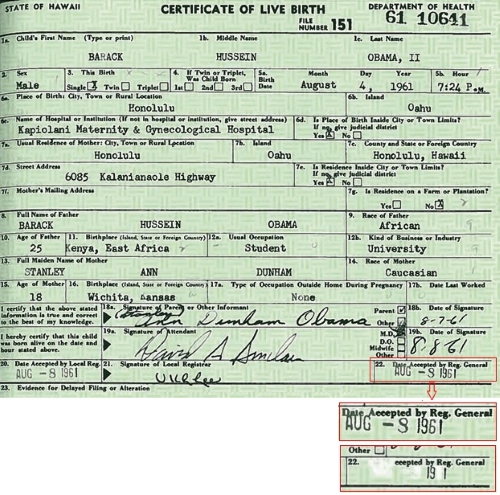 Open Questions: The official PDF of the birth certificate from Hawaii seems, to all appearances, to have benn manipulated, as in the case of the birth date (more in the text). The electronic document contains up to 20 layers.

Obama insists that he was born in Hawaii on August 4th, 1961. But this cannot possibly be true, for there would be witnesses, and not even his sister (who claims to know where her brother was born) can confirm for sure as to which hospital Obama was born in. As we have already said, she gives two different hospitals on the Island of Oahu as being the place where Obama first saw the light of day. But which is it? Apart from the fact that it must be one or the other if indeed it was either, no doctor has yet been willing to even come forward and sign his or her name to such a counterfeit birth certificate. The fact that this so-called ‘photocopy’ of a supposed ‘birth certificate’ (provided by Barack Oba­ma) is not signed by any medical doctor should tell you something. Why? Knowing which hospital or country someone was born in should be simple, unless of course that ‘someone’ is trying to hide the truth.

It was only three years later—much too late—that in spring 2011 Obama finally released the “long form” of his alleged birth certificate. A few days later, it was already debunked as an amateur forgery (see text box).

No wonder many US voters are suspicious of Obama’s past; they have every right not to trust him. In fact, in August 2008, Pennsylvania attorney and the former Deputy Attorney General Philip J. Berg filed a lawsuit to force Barack Obama to produce a certified copy of his original birth certificate to prove that he can run for the office of President of the United States. Instead of meeting this understandable request (as they finally reluctantly did), Obama’s faction fought this charge tooth and nail until the Supreme Court finally threw it out of court.

Why? We must ask again: what is there to hide?

In fact, it is reported that Barack Obama has spent as much as two million dollars of taxpayers’ money fighting any and all re­quests for him to release his true birth certificate….which, of course, doesn’t exist! Which is why in April 2011 they finally resorted to forgery when the pressure to release it became too great.

Moreover, his grandmother most positively states, for the record, that she was present at the time of her grandson Hussein Obama’s birth at the Coast Hospital in Mombasa, Kenya! So what is the truth? Who is lying? Barack? His grandmother? His sister? One thing we know for sure: someone is.

End of extract „Barack Obama: Really "made in the USA"?“

In addition, we shine a light on Obama’s family tree, and show you how the American President can’t always be relied on to tell the truth. Computer experts analyse the birth certificate made public by Obama, which supposedly proves that he was born in Hawaii. Their conclusion: it’s a crude fake. We show you why. Finally, we demonstrate how the Nobel Peace Prize winner is in reality a war president who doesn’t need to take any lessons from George Bush – in fact, some might say he’s even more dangerous than his predecessor. Which might explain why Obama was plucked from almost total obscurity to become President. This article is available in its entirety in our Facts are Facts print edition no.10.