When Our Cell Phones Chat with Our Genes

Our DNA can understand what we are saying on our cell phones. But this little known, additional hazard of today's microwave technology also conceals a valuable opportunity for the future - provided we replace unnatural cellular phone technology with a more natural means of telecommunications.

During a course we gave in Berlin some time ago, we happened to notice a young woman in the audience, Patricia B. She had a thick bandage wrapped around her right forearm.

When we inquired about this, she told us that she had a painful, protracted case of tendonitis, and she even asked us to help her, since medical treatment up to that point yielded no results.

We did not have anything on hand for treatment purposes that day, and yet we did know a possible way to give this woman first aid, at least.

We took a cell phone from its pouch and made a call – to keep it simple, to the answering machine in our office. As soon as the connection was made, Franz pointed the cell phone’s antenna towards Patricia’s forearm, and at the same time spoke a few positive, healing affirmations: “Your arm is back to normal. In every cell of your arm, the DNA is seeing to it that everything will again function in a normal, healthy manner.” 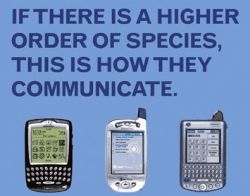 But would these species know, that cell phones can do far more than just transmit words to our ears?

The entire procedure only lasted a few minutes. Patricia reported that her lower arm tingled and felt very warm during this period. Even after these few minutes she felt a significant improvement in her condition.

When we met with the group again one week later, we saw that Patricia had come without a bandage this time. When we asked her how she was doing, it turned out that she could almost completely forget the problem with the tendonitis. The pain did not come back.

The other participants in the course listened to this actually quite personal conversation with great interest, and soon we ascertained that everyone in the group who owned a cell phone had brought it with them this particular day. Naturally we were asked to explain the apparent “miracle” of healing by cell phone.

It goes without saying that this was no miracle, but a thoroughly explainable event nowadays. First, however, to demonstrate that this was not just a matter of chance, we asked participants who owned cell phone to “call up their DNA” in a similar manner, while pointing the device to some part of their body with minor problems.

Whenever a relatively large group of people are sitting together in one place, you can be sure that the group will include some people who are experiencing some kind of pain, or whose bodies are otherwise not as they should be. This occasion was no exception, and the results of this unusual experiment were astonishing. Within a few minutes, an older woman was rid of her headache, and a man was rid of the discomfort in his stomach that he had felt since lunchtime.

This brings up two questions. First: Is there a scientific explanation for what happened to these people? And second: Can cell phones be considered therapeutic devices from now on?

Second question first, the answer is, “Certainly not.” We can state, unequivocally, that a cell phone will never be a standard recommended treatment. However, it is perfectly legitimate to use a device like this as a stopgap measure, as first aid. Much more importantly, however, demonstrations like this indicate a direction to take for developing equipment that truly is suited for therapy – equipment, in other words, that makes use of the mechanisms at work here, while using frequencies that are more natural and better tolerated than cell phone frequencies. This brings us now to the answer to the first question.

When you look at the double helix of the genetic code (see the illustration), your own DNA is smiling back at you, so to speak. We hope that you are both satisfied with each other! In any case, we live in a day and age that’s not as easy for DNA as it used to be. The source of the problem is the incredible mix of electromagnetic waves that we all have to wade through day after day.

When you first look at it, this fascinating macromolecule, which resides in the nucleus of every cell in the body, seems to be a self-contained unit that carries out its job from within this protected location, continuously constructing and maintaining the body from the inside out. It doesn’t seem to worry the least bit about the world outside.

End of extract „When Our Cell Phones Chat with Our Genes“
Did you enjoy the article?