The Old Man and the "Flower Children"

Leo the “crazy lion” has been one of our readers for many years. When we by chance got talking on the phone, we quickly realized that if more elderly people did what Leo does in his simple way, our society might just be a happier one. By bringing old people and children together through Nature and gardening, he teaches young people what really matters in life: letting love flow.

The pages of the little red book are yellowing slightly now, and it has suffered from damp at some point. But Leo takes care of it like a precious treasure. “There, look, those pages have accompanied me for over thirty years now.” It is the first thing he pulls out of his bulky briefcase to show me. The word ‘children’ is on it and children are in it; at least in terms of lyrical photographs accompanied by profound thoughts.

“Leo el Loco” is so beloved by his garden children that they knit him colourful hats. He gets his matching stripy socks from grateful grannies.

On what was previously a blank page are four quotations, which Leo once wrote there in his quirky, squiggly handwriting. One of them is very dear to his heart: A child is not a vase to be filled, but a fire to be lit. It was written by French Renaissance poet François Rabelais almost 500 years ago. Fire. It makes a child’s heart race like almost nothing else. “They love it when we burn figures,” smiles Leo benignly and shows me the photos of an old fireplace in his garden, cracked several times by the heat. “Or sometimes we burn different types of wood. I collect driftwood on the beach and dry it—it has lots of sea minerals in it. When you burn it, it gives off a completely different light, the wood suddenly burning green and blue, not just red and yellow.” The children also get a similar effect with fruitwood, which smells wonderful to boot. And when the fire smells of apples, there’s nothing nicer than biting into a fresh piece of the fruit in the flickering firelight as Leo tells his stories. Good-humoured fairy-tale teller, garden gnome, or elf? With his bushy white beard and colourful woolly hats, Leo would fit perfectly into any of these roles.

Leo is surrounded by children whenever possible. They seem to like him in the same way that bees are drawn to nectar. And they trust him because they sense that he is unlike other adults. Who else would give balls of fat to complete strangers—and in the middle of summer at that? But I willingly accept the huge fatty dumpling, and we hang it at once among the trees in our garden, “because the birds are no longer able to find the food they actually need to rear their young.” Leo understands a lot about bird-rearing; droves of songbirds breed in his garden.

He has been able to retain a wonderful spiritual quality: a child-like joy in the simple things in life. Be it early morning birdsong, a blaze of floral colour, a snail slowly sliding along, or even just the ephemeral scent of a fresh summer breeze—he appreciates the Creation around him with an intensity that most people lack.

Not Always Thinking of Yourself

An open heart often means you are able to notice other people’s suffering a little better. So in 1979 Leo visited the slums of Mexico City for the first time. In actual fact he was trying to look for Carlos Castaneda, the great writer, who had allegedly retreated to the slums. It was to be a shattering experience. “I gave away everything I had, my money, my watch, my shoes, my shirt. I only had my underwear and trousers left, and just enough money to get back to the hotel in a taxi,” recalls Leo. He cried, cried for the four million people living in the slums. “All these small begging hands, children who have no water and nothing to eat. I tell you, faced with all that, you just feel so helpless, it finishes you off,” he whispers, his voice breaking.

Leo never found the famous Castaneda, of course. When he told some Native American buskers on Garibaldi Square in Mexico City about his experiences down in the depths of human misery, they just shook their head and said, “Leo, you’re crazy!” That’s how he came by his nickname: Leo el loco—the crazy lion.

In later years, he often went back to visit the slums. Not because of Castaneda, but to ease the inhabitants’ misery, though it was the much-quoted drop in the ocean. For this reason, he took a well-paid job at an international watch corporation. That way his three children could be provided for materially, while at the same time he was able to travel the world on business and educate himself culturally along the way, taking photographs and helping underprivileged people. On so-called incentive trips throughout Mexico, he would show rich jewellers around the company’s manufacturing plants, pitch expensive watches to them, put them up in chic luxury hotels and fervidly collect money from them after the job was done to distribute it among the poor.

Although he looks like he could be Heidi’s Alp-Öhi (uncle Alp), Leo is extremely well-read. Shakespeare, Goethe, Confucius, Lao Tse… influenced by his mother-in-law, a philosophy professor, he’s grappled with it all. In Japan, where the watch company has its headquarters, he launched himself into the art of Feng Shui with the same child-like joy for learning that he once had as a young lad when he learned dowsing and other useful things from an old shepherd.

The apparent discrepancy between his physical appearance and inner philosophical mindset is in truth merely the expression of another character trait. Despite his seventy-four years, Leo is in fact astonishingly playful and creative—though some might just call it “eccentric”—well, Leo el loco, even. 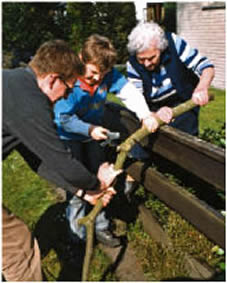 Bonding the generations: just let me do it, Nanny! I’m nearly there!

This is illustrated by his housing estate for birds. Although crowded residential planning was the order of the day due to lack of space, a good dozen or so birdhouses fit snugly on the wall of his house, neatly sheltered from the weather—he could never be accused of architectural monotony. Each house is unique, each crafted by a child. The raw materials they use are discarded letterboxes, dented bins, beer tankards and battered guitars of all sizes. “We’ve even crafted proper bird schools—‘schoolhouses’ for songbirds—which the children decorate and paint with plenty of imagination,” relates Leo enthusiastically.

About thirty-five of these comical bird residences are hung all over the garden, all of them occupied. Leo’s garden kids learn how to tell the difference between different species, not only by appearance but by song: blackbirds, song thrushes, yellowhammer, redstarts… and they even learn all the names.

Just like the neighbourhood kids, the birds are perfectly happy in Leo’s garden. I mean, where else would you get free accommodation and board? You don’t even need to struggle to find nest material. “I have more than fifty different clematis from all over the world in my garden, and there are also beautiful flower hanging baskets with coconut inlays everywhere. In spring, the birds pull the coconut fibre out of the baskets like mad,” says Leo, chuckling into his beard.

He doesn’t have a fountain in his garden—because the insects don’t like it. That’s why he’s got aragonite instead, where the water trickles leisurely among the pebbles. “Insects actually don’t go to deep water,” he explains.

Although insects can’t compete with colourful feathers or sweet trills, Leo and his garden kids have nonetheless built them a few insect hotels, which can accommodate several million of the little critters. Even scary wasps are welcome. Leo ensures that the children do not fear them for very long. “You can all tell whether it’s aggressive or friendly by its head; you mustn’t lump them all together.” After thorough instructions, a test of courage follows: “I’m now going to bring you a cart full of apples, which we’ll peel in the garden. It won’t take long for the wasps to come and visit us, maybe ten of them, maybe hundreds. All you have to do is behave the right way: don’t get nervous, don’t hit out, even if the wasps sit on your hand and crawl around a bit. They just want to absorb the salt from your sweaty skin as they need the mineral to be able to fly.”

Leo thought of another test of courage for me in particular. He wanted to give me one of his three-strong hornet populations as a gift, so that I could settle it in my garden. “But you were too cowardly and said no,” he laughs at me.

The kids like Leo, because deep down he too is still an innocent, enthusiastic child. This is very different to what might have been expected: the children of his generation have seen and suffered things that no one should have to experience.

End of extract „The Old Man and the "Flower Children"“

“Leo el Loco” managed to survive the Second World War by a hair’s breadth. Read here about the dramatic circumstances of his flight out of Königsberg (now Kaliningrad) and how he never lost his joie de vivre even in the most difficult of times. These days, Leo has been bringing joy to the lives of elderly people for many years with the help of his “garden children”, many of whom are from very difficult backgrounds. Leo always has time to lend them an ear – even in the middle of the night! And last but not least, his love of gardening has given these kids a whole new perspective on life. A touching portrait of an everyday hero who encourages and inspires by his example! Find the full article in our Facts are Facts print edition no.4.