Pain-free Childbirth - Is It Possible?

Children were not always born on this planet with such pain as they are today. Frédérick Leboyer, who caused a sensation with his books on “Birth Without Violence”, discovered an ancient method from India that makes it possible for women to bring their children to the world virtually pain-free. Our author practised this method at the birth of all four of her children with great success.

Even in our enlightened, rational times, we still speak of the ‘miracle’ of birth. But if we glance in the infirm-aries, we see with horror images of fear instead of wonder: fear, pain, cramps; women, lying on their backs hooked to cables, screaming loudly while under the observation of numerous people, most of them strangers, in a cold, impersonal environment, trying to push a human child out of their bodies, or even happily having it cut out. Too often, mother and child come away from this experience traumatised. 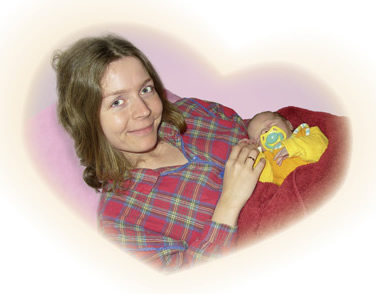 Barbara Tayler brought all of her children to the world while singing and virtually without pain. The method is called Vocal Toning.

I would like to share my practical knowledge here with you and to show in this article that it can be different. That we really can speak of the miracle of life and the miracle of birth, even when here in the western world we need a bit of help to experience this miracle as something miraculous. I myself did everything I could to avoid having an academic medicine-monitored and high-tech pregnancy and birth from the very first day that my first pregnancy was confirmed. I sought out the wisdom of women, who have been giving birth for thousands of years without medical intervention, without technical observation, without the knowledge of how ‘dangerous and high-risk’ pregnancy and birth are. But first read my story, which might inspire you to honour the greatest miracle in the world:

In 2000, I went to a gynaecologist about my cycle, which had already been irregular for many years. Her diagnosis was devastating: my hormonal system was that of a menopausal woman. “If you can ever even become pregnant, it will only be with hormone therapy,” were the doctor’s words. My greatest wish, however, was to have children. So I agreed, fully trusting in academic medicine, to the doctor’s suggestion to normalise my hormonal system. Many months later, however, I discontinued this therapy since it had absolutely no effect on my body, apart from the side effects, that is. Two other gynaecologists came independently to the same diagnosis—my hormonal levels had even become worse. I tried to make peace after a fashion with the idea that I would never have children in this lifetime, until I was led, in the most amazing way, to my current husband; I seemed connected to him with a most intense force right from the first glance. Angels accompanied us and smoothed a path for a future together, despite challenging circumstances.

During a meditation in August 2003, I suddenly saw myself with a child on my arm. I heard that its heavenly name was Aleria—which means light and joy—and that it wanted to come to us. My husband also saw this child and felt very connected to it. Tremendous joy flooded through me, a small hope began to bloom that my greatest wish would indeed yet be fulfilled. But my doubts were very loud, even louder than the words of the angel, who repeatedly told me that I would be given a daughter.

The First Miracle: The Diagnosis

And so months passed. My cycle was, as before, very irregular. In January 2004, I often felt ill, experienced nausea in the evenings, was tired and lacking in energy, and my belly felt distended; all symptoms that I had also experienced during the hormone therapy. The possibility of pregnancy was the furthest thing from my mind. Even when some of my acquaintances mentioned it to me… I could explain away all of my symptoms; I didn’t gain any weight and I still fit in all my clothes! The diagnosis regarding my infertility was practically burned in my brain. At the end of June I reluctantly went to the doctor, since my belly was so “bloated”. On the ultrasound you could clearly see a child; based on the baby’s size I was in the 31st week of pregnancy. The doctor’s sentence, “You’re pregnant!” pounded in my head. My mind wouldn’t let this message through; it was too much. I only had 9 weeks to prepare myself for motherhood and birth!

It was clear to me right from the beginning that I would not give birth in a hospital. What I had already heard about birthing from other women was enough to mobilise all my energy to find another way in the short time remaining. Again, I was guided by higher powers. I discovered that there was a birth house nearby that was run entirely by midwives. I introduced myself and immediately knew that I would give birth here. Both midwives explained to me that every pregnant woman in Germany has the right to be accompanied through pregnancy and birth exclusively by midwives. The insurance companies are legally required to cover the costs.

The midwives helped me to establish a connection with the child in my belly through loving conversations and exercises and to anticipate the birth without fear. They supported me emotionally as well as physically through homeopathy, acupuncture, and cranio-sacral therapy. The body can be well prepared for the birth through these methods: tensions and blockages in the pelvis area that can complicate the proper positioning of the child in the pelvis and even the birth itself can be gently corrected. I learned about simple, traditional techniques, such as perineal massage and hay flower steam baths or teas that the mother-to-be can prepare herself at home, that render the cervix and pelvis floor muscles soft and supple and that therefore have a positive influence on the birth before it even begins.

The midwives suggested that I write an as-detailed-as-possible, positive wish-list for the birth, for example: “I want to experience powerful rushes1 that I allow to flow through me with ease,” or “The cervix opens with every rush,” or “I experience every rush with joy and thanksgiving,” or “My baby and I are healthy and relaxed.” On top of that, you can include the birthplace, the kind of birth, as well as the people who should be there. This wish list is a very effective way to prepare a self-determined, wonderful birth experience. The mother-to-be actively uses the power of her thoughts and thereby assumes responsibility for herself and her birth experience, instead of leaving the birth process up to doctors, machines, and hospital routine. One of the midwives, Monika Wollenberg, eventually told me in one of our sessions about vocal toning, which would become a key part of my experience. The French gynaecologist Frederick Leboyer brought vocal toning from India to Europe. The vowels, A, E, O, I, U, are sung to a certain melody during the rushes either in this order or individually as the mother-to-be feels they are needed. Every vowel corresponds to a meaning and function (read more in the following article). During the birth preparation class, I experienced, instructed by Monika, the effect of vocal toning for the first time. After that evening, I was full of energy, joy, trust, strength, and thankfulness for what I had learned and what I would be allowed to experience for the first time in the near future: the birth of my child.

The Second Miracle: The Birth

At the end of August, punctually on my due date, it was finally time: the rushes started just after midnight. Thanks to the loving preparation by my midwives, I was full of joy, happiness, and inner peace. After consulting with one of my midwives, I took a bath; three hours after the rushes began, my husband brought me to the birth house. The midwives received me and gave me a short examination. I was able to climb straight in the birth pool, since I had opted for a water bath. In contrast to a hospital birth, no machines were attached to my body and I was also able to forgo the IV, which most women experience as disturbing. The room was warm, the lights were dimmed, and candles burned and soft music played in the background. The midwife Monika Wollenberg began to sing with me on the vowel A. During the rushes, I felt how the melody’s sequence exactly followed the progress of the rushes. I sang more loudly as the rushes became more powerful. Thereby, I felt no pain, but rather an unimaginable power that flooded through my body anew with every rush. I felt carried, as if I were surrounded by Angels, and floating on clouds.

My husband and the two midwives sang along with every rush. As the end of the birth neared, Monika recommended that I switch to U, which supported the flow, the pleasure, the ‘giving in to the process’ of releasing my child. With my powerful song that now changed the quality of the rushes, my daughter was gently born into the warm water with one single rush, just four hours after the rushes had begun. She was immediately laid on my belly and covered with a warm, dark red towel that served to remind her of her surroundings in the womb. And there lay my child who, according to the doctors, was not supposed to be!

In answer to the midwife’s question, ‘How do you feel?’ I answered, full of surprise: “Was that it?” Based on the stories of other mothers, I had imagined birth to be more arduous, more painful, and certainly much longer.

For me, this was the proof that a woman doesn’t necessarily need to suffer and experience unbearable pain. It is totally dependent on her own preparation and, even more importantly, the environment and care she receives during the birth.

The umbilical cord was only severed after it had finished pulsing. I left the bath after about 30 minutes, to be provided a large bed in a comfortable room by the midwives. My husband held our daughter, Angela (we named her ‘Angel’ because she was a gift from heaven for us), the whole time in his arms. Finally, the two midwives left the room so that we three could be left in peace. Angela was only finally weighed, measured, and dressed shortly before we left the birth house to drive home and was promptly returned to my arms. I spent my post-partum confinement at home; the midwives visited me daily and assisted my healing, recovery, and nursing processes with various natural healing cures.

End of extract „Pain-free Childbirth - Is It Possible?“

In our printed edition, the author Barbara Tayler relates the miraculous story of how her children came into the world – all with very little pain for Tayler herself! Not only does she explain the effects of vocal toning, but also in which phases of the birthing process these are used. Tayler also discusses individual homeopathic remedies for mothers and newborns, which can be derived from the umbilical cord, placenta and breast milk. These can be very helpful in the first few months to banish stress and depression, or to improve milk production in the mother and digestion and sleep for the baby. Find the entire article in our Facts are Facts print edition no.9.