No other form of the disease stirs up so much fear as breast cancer. Yet the fact remains: the risk of contracting breast cancer could be effectively reduced by achieving the right balance of vital hormones.

For many women, the diagnosis ‘breast cancer’ hangs above them like a Sword of Damocles – especially if their mother or sister has suffered or even died from the disease. Hardly surprising, when every ninth woman in Western Europe will be confronted with this very diagnosis at some point in their lives – and the trend is rising. Men too can suffer from breast cancer, even if such cases are much rarer. Unfortunately, medical and research departments are oriented toward treating the symptoms, with little regard paid to the true causes and context of breast cancer. They do this even though doctors and healers using a holistic approach – and plain common sense – represent a rich store of knowledge on how to prevent and cure the disease. 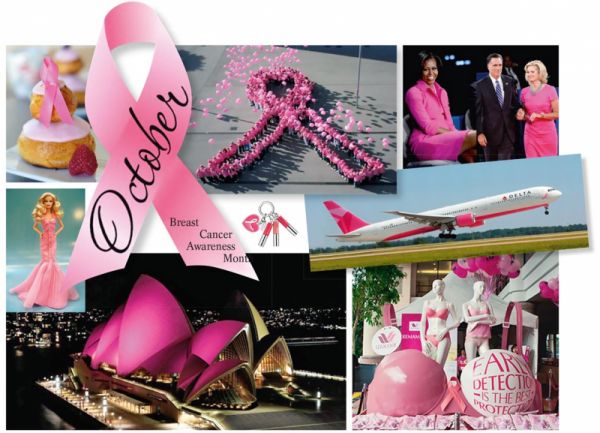 For some years now, October has been known as Breast Cancer Awareness Month, and the war is fought on all fronts: with pink ribbons – whether worn by people, or made of them; pink cakes; politicians and Barbie dolls dressed in pink; planes painted pink; the Sydney Opera House lit up in pink; pink PR parties; and pink lip gloss. But is this really breast cancer prevention?

But breast cancer is big business for the pharmaceutical industry and high-tech medicine. The mass media and the Cancer League’s pink ribbon continue to be used to generate fear. This fear can prove so overwhelming that now some women even choose a mastectomy over the risk of cancer. Two famous examples of this trend are Angelina Jolie and Sharon Osborne. When they discovered that they were carrying a gene linked to increased breast cancer risk, they both had both breasts ‘preventively’ amputated! Yet studies show that the breast cancer rates of adopted daughters correspond to those of their adoptive rather than biological mothers. The obvious conclusion – as we shall see – is that the chances of suffering from breast cancer have much more to do with lifestyle than genes (which the latest research has shown are susceptible to change). Fear of inheriting breast cancer genes has been made obsolete.

Mammography is not preventative medicine – it is purely a diagnostic method!
Medical authorities advise us to ‘Have a regular check-up’; and during pink-ribboned October, aka ‘Breast Cancer Awareness Month’ (!), they are particularly keen to impress upon us women that we mustn’t forget to have our breasts x-rayed. Hospitals, doctors, the media, even politicians and celebrities allow themselves to be co-opted every year to make us, well, terrified of breast cancer... because that’s basically what it comes down to. In order to discover tumours early on, and treat them as quickly as possible – with surgery, chemotherapy, irradiation, and finally years of drugs, all with severe side-effects – comprehensive breast screening programmes are already a fixture in many countries. That means that from the age of 50, women are urged to have both breasts x-rayed every two years. However, around one woman in ten cannot breathe out comfortably after what can be a painful procedure.

All of these ‘false positives’ were the cause of often months of uncertainty and mental agony! Worse, the ionising x-rays used in the mammograms are a proven risk factor for cancer.

Comprehensive screening programmes are now commonplace in many European countries, being deployed to catch other types of cancer, including cervical cancer. One example is Germany, which invites women for annual screening – in contrast to Finland, which requires only one test every five years. All the more fascinating, then, that four times more German women than Finnish face a potential cervical cancer diagnosis.

Back to breast cancer screening. Experts are split on its true value. Daniel Dauchwalder, spokesman from the Swiss Federal Office of Public Health stated: “If you look at the entirety of the comparative studies, mammography screening has only a small effect on the incidence of breast cancer mortality.” Regarding the financial feasibility of the screening programmes, economist Tilman Slembeck from the Zurich University of Applied Sciences noted that for every woman saved, costs of between 1.5 million and 2 million Swiss Francs were incurred (i.e. roughly £1-1.3 million or $1.65-2.2 million).

But where does actual breast cancer prevention come into all this? What practical steps can women take to reduce their own risk of breast cancer, as well as that of their children? Many factors contribute to causing breast cancer. Of these, certainly the most significant (and which the medical establishment has long been aware of, despite refusing to follow the logical conclusion of a sensible, honest public information campaign) is:

Oestrogens are hormones that play a central role in every woman’s life. They are produced chiefly in the ovaries and are responsible for the growth of the breasts, initiating ovulation, the production of the endometrium, which is expelled once a month during a woman’s fertile years (menstruation).

Oestrogen’s role is always to promote cell growth, an effect that needs to be held in check by oestrogen’s counterpart, progesterone, in order to ensure that cells don’t grow out of control. A healthy balance between oestrogen and progesterone is thus a prophylactic against breast cancer.

Like oestrogen, progesterone is also predominantly produced in the ovaries – more specifically, in the corpus luteum (‘yellow body’ in Latin), formed from the follicle (the cells from which the egg is released). This makes regular ovulation the precondition for healthy progesterone levels.

When a woman reaches about thirty- five, her hormones will start to fluctuate for the first time: from then on, menstruation without ovulation becomes a frequent occurrence. This is the beginning of perimenopause, which always goes hand-in-hand with a decline in progesterone levels. However, oestrogen remains at the old level for many years, as demonstrated by the continuation of women’s menstrual cycles. At this point, menopause is still far from the woman’s mind!

Yet falling progesterone levels often instigate or intensify menstrual complaints. This is the period in which the risk of contracting breast cancer increases.

When oestrogen production also sinks to a low level during the ‘real’ menopause, the typical symptoms of ‘the change’ appear: hot flushes, vaginal dryness, and what can at times be violent mood swings. By this point, progesterone production will generally have sunk to a record low.

Stress is another factor that significantly inhibits progesterone production. Whether it is of physical or emotional nature (i.e. caused by relationship problems, parenting difficulties, or overwork) is irrelevant. Women in particular are often under a lot of pressure during this phase, and not just from the outside world: they often demand too much of themselves! Being overweight also contributes to higher oestrogen levels, because fat cells can produce the hormone. This is the reason why obese women often continue to have periods for longer than thin ones. All of these factors contribute to an imbalance, with too much oestrogen and too little progesterone, known in scientific terms as ‘oestrogen dominance’.

Oestrogen dominance can cause the following complaints, both before and during the menopause:

The Dangers of Oestrogen Dominance

Oestrogen dominance is now considered one of the main risk factors for breast cancer. The scientific and medical establishment is well aware of this – for decades, the drug most commonly used to treat breast cancer has been tamoxifen, an ‘anti-oestrogen’ or ‘oestrogen receptor antagonist’. Tamoxifen blocks oestrogen receptors, counteracting the prevailing oestrogen dominance. It’s just a shame that the medical profession concentrates on blocking a supposed excess of oestrogen, instead of applying knowledge that we already have and replacing the missing progesterone, and actually ensuring effective breast cancer prevention!

In the full article you will learn how natural hormones are just one of a number of options that might help prevent breast cancer. We give you twenty simple and well-founded tips that can help alleviate your fear of this terrible disease. Especially at a time when Angelina Jolie’s mastectomy has sent shockwaves around the world, women should not forget that there are other options beside radical and potentially unnecessary surgery.