Beneath the Motorways Lie the Beaches of the World

“There are as many stars as there are grains of sand,” we say, meaning an infinite number. We clearly don’t believe that the sand on this planet could ever run out. But we are hugely mistaken.

Most people think of sun, sea, and beach holidays when they think of sand. Less romantic minds think of money – lots of money. That’s because sand is one of the most valuable resources on Earth: no other material apart from water is consumed in such vast amounts around the world – fifteen billion tonnes per year, in fact. Those with a finger in the pie can earn a fortune. The official trade volume of sand is seventy billion dollars per year. And while sand slowly becomes scarcer, the businesses are thriving. 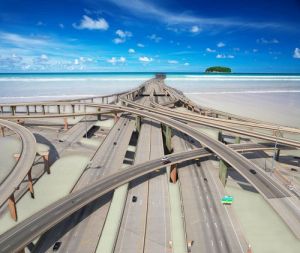 Say that again? Sand is becoming scarce? Where’s it all going, then? You can’t be talking about the stuff that spills over the edge when you’re playing in the sand pit, surely? Of course not. But the scale of the global sand pit is significantly larger than we might have thought. Sand is an elementary material, one of the most important foundations for the development of civilisation. It’s a great all-rounder, without which nothing today would work: it is found in cleaning materials and cosmetics, mobile phones and credit cards. No computer would work without sand, no aircraft would fly: sand is in the plastic components of cabins, in the (aluminium) alloy body, the tyres and the engines. Above all, however, sand is found in roads and buildings. That’s because it is practically syn­onymous with concrete: two-thirds of all structures on the planet are made from reinforced concrete, two-thirds of which consist of sand. The construction sector is the biggest consumer of sand: two hundred tonnes of the material are used to build a medium-sized house; for a larger building such as a hospital, three thousand tonnes are required. Every kilometre of motorway needs thirty thousand tonnes of sand, and a single nuclear power station even uses twelve million tonnes. These are vast quantities, but because sand is so incon­­spicuous and apparently inexhaustible nobody thinks anything of it.

Yet sand is not a sustainable resource! And we are slowly discovering that every grain on this Earth has its meaning and purpose. All the cheaply and easily extractable sand reserves have already been exhausted. First there was open-cast mining in sandpits, which blighted the landscape. Then we began dredging rivers, but had to contend with floods as a result. Now we have turned to the final resource: the sea bed. You don’t see the holes down there, and besides: sand is thick on the ground, so to speak. Huge ships known as dredgers pump the sand from the ocean floor up to the surface: depending on the ship’s performance and location, that’s between four and four hundred thousand cubic metres of sand per day. And several thousand of these beasts are operating on the world’s oceans right now.

The demand for sand is unbroken. Spain holds the dubious record of being the biggest sand consumer in Europe. There is a lack of housing in the country, although thirty per cent of apartments stand empty. Entire airports have been built that were never used and are now falling into rack and ruin. In China, whose construction industry requires about a quarter of the world's sand produced for building, there are sixty-five million uninhabited flats. In Mumbai, fifty per cent of all building projects have been abandoned, while in Dubai, construction proceeds apace even though the tallest building in the world, the Burj Khalifa, stands ninety per cent empty. In most cases, the property is held back by speculators in order to drive prices up. And the sand is in there everywhere, lots of it – though, as we will see, it is urgently required elsewhere.

In addition to the many construction projects, huge quantities of sand have also been used for land reclamation. The most notable example is again Dubai. The extravagant embankment project The Palm – artificial islands built for the rich and powerful – swallowed up over one hundred and fifty million tonnes of sand. Three times as much was needed for the subsequent fifteen billion-dollar project, The World (three hundred artificial islands). Yet The World was abandoned due to the financial crisis of 2008 and is slowly but surely sinking back into the sea.

Now, you might think the sheikhs would have enough sand to realise their huge projects. Far from it – Dubai’s sand reserves have long been exhausted. This seems laughable, because if there’s one thing in abundance there, it’s sand. But not all sand is the same: the desert variety is completely unsuitable for construction projects, as its grains are round and smooth, polished by the wind. They don’t adhere to one another, and any structure made from them would crumble like a cookie. It is only the coarser and more angular sand shaped by water (i.e. the sea), which can be used for building. This means that Dubai is using ‘foreign’ sand, mainly Australian. Around three and a half thousand Australian companies export sand to the Arabian Peninsula. It’s a lucrative business: profits have tripled over the last twenty years. Australia earns around five billion dollars per annum from sand, which it gets for free apart from the cost of obtaining it.

Another example is Singapore. Singapore’s existence depends entirely on sand imports, as it is now hopelessly overpopulated. As a result of land re­­clamation, the city-state has already acquired one hundred and thirty square kilometres of surface area; another one hundred square kilometres is planned by 2030. This sand comes largely from Indonesia, a country that has been hard hit by the consequences of sand exports.

‘Trickle-down’ economics has acquired a new meaning thanks to a business now so lucrative, it has given rise to a global sand mafia. At the same time, common sense has also been trickling out of the heads of those responsible for many big construction projects. In the full article in the Facts are Facts print edition no.17, find out how taxpayers are already bearing the burden, and the fate that lies in store for many coastal nations.

This article appears in Facts are Facts No. 17