Discovered: New Cause for Lyme Disease

Scientists have discovered another cause of Lyme disease. A new bacterial species—also transmitted by a tick bite—has been identified, with the first cases being reported in three states in the US’s upper Midwest. 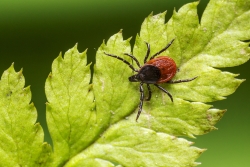 Scientists have discovered another cause of Lyme disease. A new bacterial species—also transmitted by a tick bite—has been identified.

The new species, called Borrelia mayonii, is also transmitted by a bite from the black-legged tick, or deer tick. It causes most of the usual symptoms of Lyme disease, but someone who gets the new infection may also suffer nausea and vomiting, rashes that spread over the skin (instead of the bull’s-eye rash that has been typical), and a higher concentration of bacteria in the blood.

The new variety has been detected in Minnesota, North Dakota and Wisconsin following some unusual test results gathered between 2012 and 2014, say researchers from the Mayo Clinic and the Centers for Disease Control and Prevention (CDC). The researchers believe the new bacterial species has only recently emerged.
Until the discovery, researchers had thought that Lyme disease has been caused by one bacterial species, Borrelia burgdorferi.

Current tests for Lyme disease should pick up the B.mayonii variety, and blood smear tests may also be able to detect it, say the researchers. Both varieties can also be successfully treated by a course of antibiotics provided detection is made early enough.

Published in the categories Health • Science